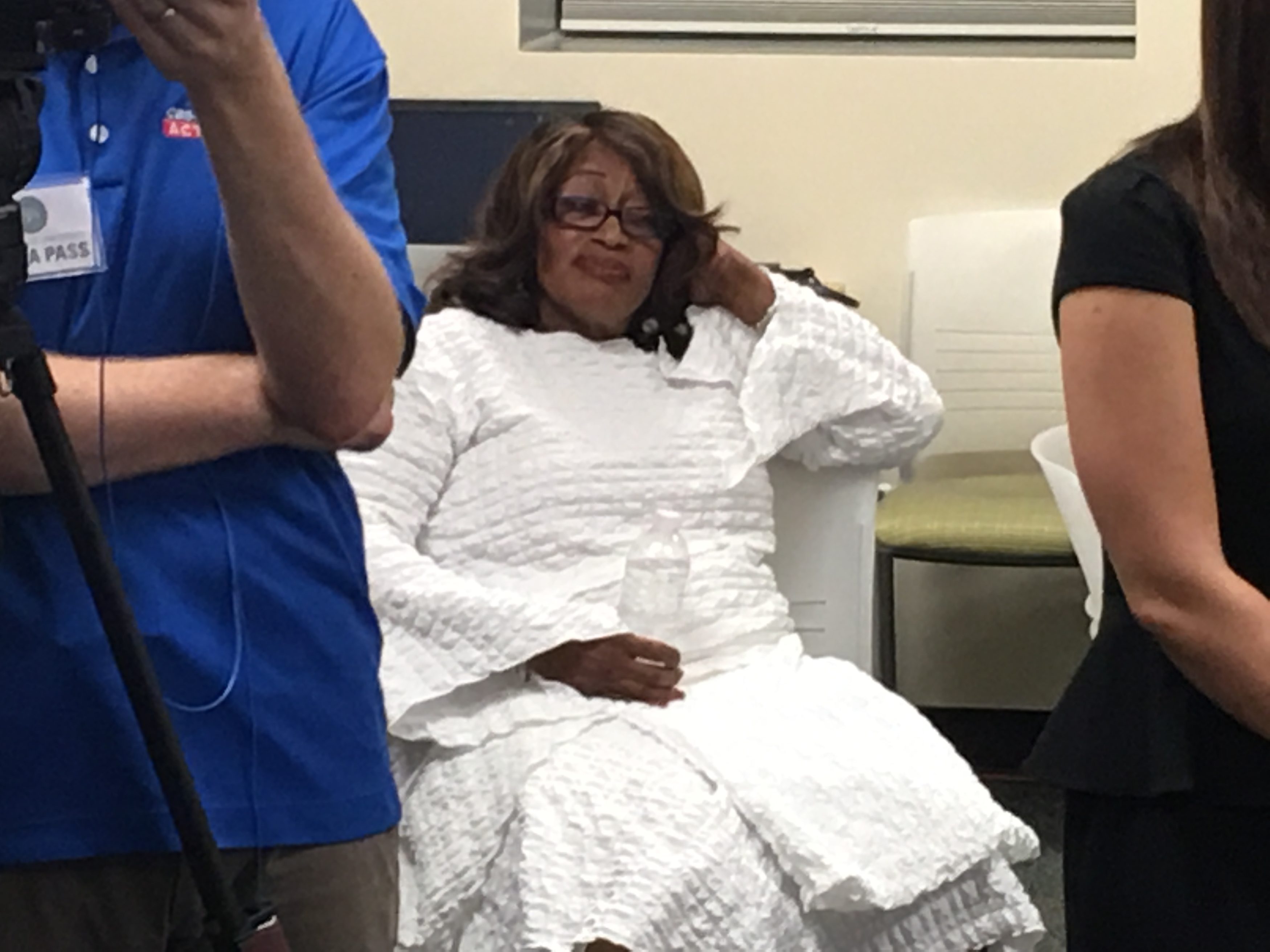 Is the Holy Spirit an external force? That concept is, improbably, what the appeal for a new trial of convicted former U.S. Congresswoman Corrine Brown is predicated upon.

Meanwhile, Brown’s lawyers also filed an acquittal motion late Thursday, contending that the government did not prove its case, as some One Door money went toward charity, and there was no hard evidence that Brown conspired to defraud donors.

New trial motion: Brown was convicted of 18 fraud and tax counts in May, and her lawyer made no secret of his intent to file for a new trial.

This motion is filed on unique grounds: the jury was corrupted because a juror was removed for deeply held religious convictions, and the Holy Spirit guiding someone does not disqualify that person from jury service.

On Thursday,  Brown filed her motion – and the Holy Spirit took a prominent role in the narrative, via the dismissed juror who some say was railroaded off the trial. And others maintain was just less than stable

More on the juror: “Juror 13 told the Court that his religious beliefs were not interfering with his ability to decide the case based on the Court’s instructions and the evidence. A 37. He said he had followed the evidence, and that he was going to make a decision based on “what I think and believe.”

That included such as “guidance from Heaven.”

The motion takes Judge Timothy Corrigan to task also, for saying that religious mania/revelation is “disqualifying.”

“It’s not that the person is praying for guidance so that the person can be enlightened, it’s that the higher being — or the Holy Spirit is directing or telling the person what disposition of the charges should be made,” was how Corrigan summed up the construct.

The motion seems predicated on the assumption that this is a valid revelation, as if – somehow – this is to be taken at face value and not as evidence of mania.

“A juror’s reliance on a holy spirit bespeaks devotion to duty; not external influence,” the motion continues.

In a career full of remarkable chutzpah, Brown’s latest gambit — invoking divine ordinance as a retroactive defense in a fraud trial where the government laid waste to her defense strategy — may not be great legal strategy.

But it is, as ever, incredible theater.

Acquittal motion: The defense contends that Brown was not found guilty “beyond a reasonable doubt.”

“The government asserted that the defendant and her coconspirators knew that at the time of the solicitations they intended to use some of the funds for their personal use and expenses. The failure to disclose this fact to the donors, according to the government’s theory, amounted to wire fraud and mail fraud,” the acquittal motion asserts.

However, scholarship funds were, the defense contends, actually derived from these events.

Regarding the fraud of which Brown was convicted, the defense contends that no evidence was provided of conspiracy to defraud between Brown and One Door CEO Carla Wiley. Meanwhile, in the case of Brown and former chief of staff Ronnie Simmons, the defense makes an interesting claim.

“Simmons testified that his theft of One Door for Education funds was often done at the direction of the defendant but he was not able to provide any corroboration for this claim. What stands out the most about Mr. Simmons’ testimony are the statements he made that eviscerated the government’s theory concerning the defendant’s guilt,” the motion reads.

Those in the courtroom may have missed that evisceration.

“Simmons provided exculpatory evidence on behalf of the defendant,” the defense said, as he contended that at least some of the funds went for charitable purposes.

Meanwhile, the government only provided “circumstantial evidence” that money collected from One Door donors made its way to Corrine Brown.

That circumstantial evidence included bank statements and video evidence of people taking money from the One Door account and cashing it out or putting it into Brown’s account.

The defense contends “the government asked the jury to speculate about the defendant’s state of mind, and to make a number of inferential leaps that were not supported by logic or the law. The government presented a purely circumstantial evidence case.”

“While the defendant did have a professional and personal relationship with Mr. Simmons, and a very limited number of interactions with Ms. Wiley, merely associating with certain people and discussing common goals and interests does not establish proof of a conspiracy,” the motion says, undercutting the existence of a conspiracy to defraud.

Wiley and Simmons, the motion reads, conspired — with Brown the unwitting, aged dupe: “a person who doesn’t know about a conspiracy but happens to act in a way that advances some purpose of one doesn’t automatically become a conspirator.”

Brown’s acquittal on certain counts of mail fraud and wire fraud, the defense says, only further undercuts the case: “At worst the defendant was extremely careless and reckless with the handling of her personal finances and her obligations to ensure that her financial disclosure forms were accurately completed.”

nextAirport shooting suspect due back in court