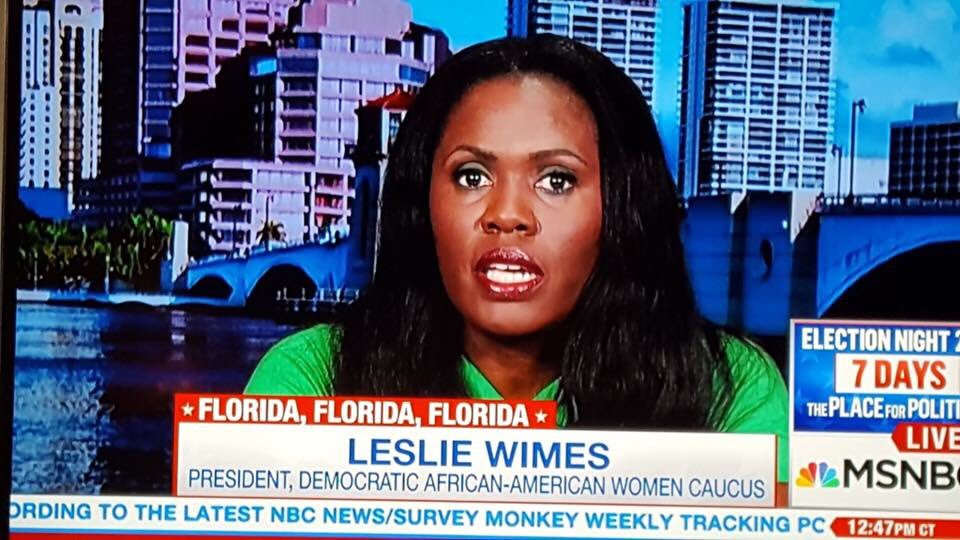 Editor’s note: The op-ed below originally appeared on the award-winning blog, The Florida Squeeze. However, its editors took the op-ed down because it said it failed to meet that site’s editorial standards.

“Although the tone of the piece was intended to be facetious and is based on what many believe to be reality, we were alerted to the possibility it could have been read to assert facts not in evidence impugning Ms. Wimes’ professional integrity, which the Squeeze has no reason to question,” the editors of The Florida Squeeze wrote.

Regardless of what the editors of The Squeeze think of the op-ed AND WITHOUT the permission of the original author, I am publishing the op-ed in its entirety because, now, the piece in and of itself is newsworthy. The taking down of the op-ed has probably made the piece more interesting than if it had just stayed up.  Readers of The Florida Squeeze, Florida Politics, and all other political websites in Florida deserve to know what is at the core of the controversy.

We have been told that Leslie Wimes complained enough that she was able to get this piece taken down. We do not have confirmation of this from the editors at The Florida Squeeze. We will let their editorial message speak for itself; they did not think it meant the standards of their site.

We, like the Florida Squeeze, invite Wimes to write her own op-ed for publishing here, although we’re pretty sure that if she has something to share, she knows how to get the word out.

So, as the saying goes, we’re gonna just leave this right here…

One of the best pieces of advice that I learned from old hands who have held high political office is that you should never assume that you know the motives behind the actions that people take without hard evidence.

This is especially true when your inclination is that those motives are nefarious.

Leslie Wimes is a name I came to know back in 2014, and her name has kept popping up in my efforts to stay current on what is happening in the body politic over the last several years. I have my own opinions about Ms. Wimes, but instead of overtly expressing my opinion(s) I am going to stick to the facts. I am going to lay out her actions.

I am also going to lay out the actions someone would take if they were a Republican plant who had as their main objective undermining Democrats here in Florida. In the end, we will see how her actions line up with what a Republican plant would do so that everyone can judge for themselves.

Leslie Wimes and I were actually on the same side of an election when I first heard her name back in 2014. She was supporting Sen. Nan Rich for Florida Governor, and I was the Data Consultant/Director for the campaign.

I will go to my grave espousing the fact that Sen. Rich would have made the best governor of those running had she been elected, and since the other two main candidates were the current and immediate past GOP Governor of Florida there is no doubt in anyone’s mind that she was the most liberal candidate. That being said, Sen. Rich was the candidate that Republicans most wanted to see face off against sitting Gov. Rick Scott in the General Election.

The GOP elite thought that Sen. Rich would have been much easier to beat than Charlie Crist, and while I disagree with that assessment I can say without equivocation that is what they thought. So, anyone working on behalf of GOP interests would have supported Sen. Rich back in 2014.

Surely among the top goals of Florida Republicans in 2016 was to retain a GOP US Senate seat in the state, elect a Republican President, and undermine the DNC Chair who also happened to be an elected official in South Florida.

Ms. Wimes’ support of Tim Canova and Pam Keith (initially) was among her most notable efforts in the 2016 election cycle. Canova and Keith are both intelligent, impressive, and passionate Democrats who had the ability to strengthen a weak Democratic bench in Florida. Another thing that they both have in common is that they ran for offices that they had little hope of winning, and did so in a way that was divisive.

Republicans who were paying attention were likely giddy at the notion of promising Democrats running in such races. It divided Democrats, ensured that these promising candidates weren’t added to the Democratic bench of elected officials, and had the possibility of disillusioning these candidates and their Democratic supporters.

Do you think that might mean that Machiavellian Republicans have near the top of their wish list either making inroads with Black voters or trying to make them disenchanted with the Democratic Party so that they don’t vote Democratic as much as they have done historically?  I certainly do.

Republicans would undoubtedly support such efforts, and any efforts of any plant that they may have, by giving said person a platform from which they can work from. It is noteworthy that Ms. Wimes did a media blitz espousing messages critical of Democrats to GOP-oriented outlets right before the 2016 General Election. Oh, have I mentioned yet that these articles that I keep referencing (which I will post a link to below) by Ms. Wimes are from the Republican-run website Sunshine State News?

The one stance that Ms. Wimes has taken this year that I have the most trouble wrapping my head around being taken by any reasonable Democrat is that Gov. Rick Scott “engages” the Black community more than Democratic U.S. Sen. Bill Nelson does.

For context, Gov. Rick Scott is widely expected to challenge U.S. Sen. Bill Nelson for his seat next year. Winning that U.S. Senate seat is a top priority for Republicans this cycle. The fact that Gov. Scott has restored the voting rights to fewer people than any of his predecessors, and those 1.7 million Floridians who could get their rights restored skew very heavily toward minority communities, is one of many examples as to why Gov. Scott is no friend to the Black community. Ms. Wimes touting Republican Gov. Rick Scott in such a ridiculous way over a sitting Democratic U.S. Senator is curious.

One constant complaint from Ms. Wimes is that the FDP and Democratic leaders meddle in party elections and primaries. Ms. Brown pulled out of an event because the person holding the event is a candidate in a contested Democratic primary for US Congress. Ms. Wimes railed against Ms. Brown in a display of sheer hypocrisy by Ms. Wimes. Ms. Brown even provided her phone number to Ms. Wimes and said that Ms. Wimes should be free to call with any questions she may have. Ms. Wimes continued her bizarre attack against Ms. Brown (posted below) in spite of Ms. Brown extending an olive branch.

I have nothing but love and admiration for someone like Susan Smith, even though we don’t always see eye to eye. If someone isn’t in line with Ms. Smith’s values, she isn’t afraid to say so regardless of who that may irritate.

The difference between a great Democrat like Susan Smith and Leslie Wimes is that Susan Smith dedicates her time and her money to numerous Democratic and liberal causes she believes in. There is no doubt that all of Susan Smith’s actions are geared toward making the Florida Democratic Party successful in a way that aligns with her vision for the party. Ms. Wimes has no such record. There has not been a single instance where Ms. Wimes has supported a Democratic nominee or institution in Florida except against other Democrats. I am not saying her record on such matters is light. It is literally nonexistent.

Ms. Wimes has no such record. There has not been a single instance where Ms. Wimes has supported a Democratic nominee or institution in Florida except against other Democrats. I am not saying her record on such matters is light.

It is literally nonexistent.

Here is what would be on my list of how to undermine Democrats as a Machiavellian Republican in Florida: ensure Democrats don’t build a bench by steering good candidates into races they can’t win and hope they get disillusioned when they lose, sow seeds of doubt and/or discontent into the most loyal Democratic voting bloc(s), and attack/try to undermine major Democratic institutions, elected officials and statewide candidates. The list is not mutually exclusive.

I would do all this while making sure that I never actually supported a Democrat over a Republican. If (s)he needed a platform from which to do all this, I would offer television and other media outlets like Sunshine State News to spread messaging beneficial to Republicans.

It is funny how this all seems to overlap perfectly with Ms. Wimes’ actions. Again, I am not saying that she is a GOP plant. Just because something walks like a duck, talks like a duck, and acts like a duck doesn’t mean that it isn’t a unicorn that lays golden eggs. I leave it to you to consider the facts and come to your own conclusion.

Sean Phillippi is a Democratic strategist and consultant based in Broward County. He has worked for campaigns on the federal, state and local levels, including the Florida Democratic Party and the Democratic Congressional Campaign Committee. Sean is the Managing Member of TLE Analytics LLC, the political data and consulting firm he founded in 2012.