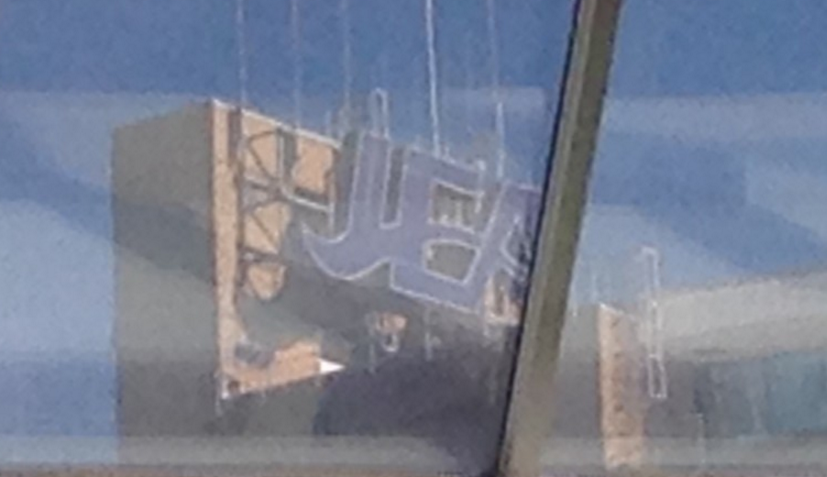 In what has been one of the roughest weeks in the tenure of Jacksonville Mayor Lenny Curry, his administration presented to a skeptical City Council — and a more skeptical overflow crowd — a controversial report outlining the benefits of the sale of the local public utility.

Profits could be up to $6 billion, the report said. But for City Council members, there was a desire to put the brakes on before moving as quickly as the study would suggest is optimal to make the biggest profit.

With JEA brass saying there would be no move without a “commitment from the community,” what was clear was the Council did not want to commit.

That lack of commitment was underscored toward the end of the meeting. When asked to stand up if they opposed the sale, the entire audience did so as one.

The valuation study from “Public Financial Management” was pushed out in draft form last week, and it suggested that this is the best time ever for Jacksonville to unload all or part of its public utility.

JEA Board Chair Alan Howard had requested a City Council meeting. He was rebuffed by Council President Anna Brosche, who nonetheless had to preside over the meeting anyway when Curry called a conclave.

The halcyon days of Curry and Brosche cheerleading the Jaguars during Friday pep rallies in Council chambers are gone, lost in a phalanx of claims and counterclaims, character assassinations that included the Mayor calling the Council President a liar when she said Curry wanted an authorization to explore a sale in Wednesday’s meeting (then tweeting out a quote from “On War” by Clausewitz) followed by Brosche’s assistant saying Curry’s chief of staff “accosted” her, creating a hostile work environment.

The charter change that would allow all or partial sale, per a General Counsel memo, would require a two-thirds vote of the City Council, with follow-up votes for dispensation of assets being a simple majority.

That would be the proverbial heavy lift, given that most on council who had an opinion going into Wednesday were skeptical. Some wanted a referendum (which is not permissible, per the memo). Others think a sale is bad business.

And for many of those skeptics, it wasn’t lost on them that Curry patron Tom Petway, a board appointee who replaced one of Alvin Brown‘s picks soon after Curry took office, was the primary pusher of the sale option last year.

Lots of prologue for this meeting, essentially.

Brosche noted, with an edge in her voice, that the valuation report would be given out only after the presentation — another sign of the chilly dynamic between the Council President and the Mayor.

Brosche also maligned anonymous phone calls to citizens alleging JEA mismanagement, saying that “whoever is playing politics [with this issue] should come forward.”

JEA CEO Paul McElroy took the mike with Chairman Howard, and dynamics were chilly: Brosche noted that the notice discussed an “e-valuation report,” then, with an edge in her voice, said she’s “really looking forward to this.”

Brosche was not looking forward to hearing from the Mayor; she refused to recognize Curry to speak.

Curry tweeted that “it is unfortunate the Council President refused to call a public meeting to distribute a public document in a transparent manner. I called this meeting so all could get this document at the same time. I called this meeting for information purposes. No action to be taken … Also unfortunate she publicly refused a request for me to make brief remarks. Here is what I would have said. I am not against or for privatization of the JEA. My focus is &will be 1. what is good for rate payers/ taxpayers 2. What is good for the hardworking folks of JEA.”

“We are presented with a historic opportunity,” Chairman Howard said, a “once in a generation” chance to sell.

Howard, seemingly oblivious to the dynamic, discussed going forward with “unity,” before introducing Michael Mace of PFM to present. 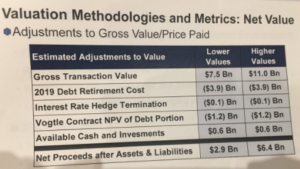 Mace noted that the report was intended to provide a value range for the utility as an “overall enterprise … for the sake of simplicity.”

Proceeds, the report said, could be between $2.9 billion and $6.4 billion after the retirement of debt. Mace stressed that is a range of values, and he verbalized the range as “three to six billion.”

Values range from $7.9 billion up to $10.1 billion, based on cash flow, price/earnings ratios, and other metrics.

The report noted that as recently as 2012, a sale would not have been in JEA’s interest; however, conditions (low-interest rates, high stocks, and a thirst for expansion/consolidation by big service providers) have changed. Lower corporate taxes make transactions more attractive, Mace said, along with a decrease in capital investment in the industry.

Utility stocks and assets, Mace said, were highly valued, doubling since 2009 to a price/earnings ratio of 20.

While markets can change during a transaction, Mace’s contention is that the time is good to make a move.

Debt retirement to the tune of $3.9 billion would be paid for with proceeds, as would other costs.

“This is a very complex undertaking,” Mace said.

Curry addressed media after the presentation, saying he wasn’t “for or against” privatization, and saying that those who noted one of his biggest donors made the proposal were guilty of “political gamesmanship.”

Curry had “no idea” of the value range listed in the report pre-presentation, saying that the report suggested it “may be a good time to sell.”

From there, Council members posed questions for Mace.

Many of those questions — such as Councilman Reggie Brown asking if a sale would benefit areas in town that have waited half a century to be put onto city sewer — were outside the scope of the report.

Displaced employees and contractors, and lack of local control, were concerns for Brown, as were rectifying long-neglected infrastructure promises.

CEO McElroy said that in some scenarios, there may be little change to that local control.

Councilman Tommy Hazouri likewise was skeptical of the lack of experience with mergers and acquisitions by the consultant. Hazouri, normally a reliable ally of the Mayor, questioned the honesty and reliability of the report.

“Our number one concern is the ratepayers and employees,” Hazouri said. “I worry about the employees and pensions … I feel like we’re being rushed … pressured. I don’t know why we’re even dealing with this.”

CEO McElroy noted that the board had been watching markets for 18 to 24 months, noting that the environment is “different” now, when asked if major political donors drove the exploration of a sale.

“We’re putting the cart before the horse,” Councilman Danny Becton said, saying that the valuation report was incomplete in terms of pros and cons.

Becton, the most outspoken fiscal watchdog on the Council, questioned the lack of evaluation of why the city would even want to sell.

CEO McElroy noted, toward the end of the meeting, that there would be no move forward without a “commitment from the community” to do so.

Judging from the spectacle Wednesday afternoon, with even reliable allies of the mayor asking skeptical drill down questions, such a commitment is a long way away.

Councilman Garrett Dennis closed the meeting by calling for the JEA Board chair to step down, calling the meeting a waste of time and a fumble.

nextHouse passes bill that would allow certain minors to wed