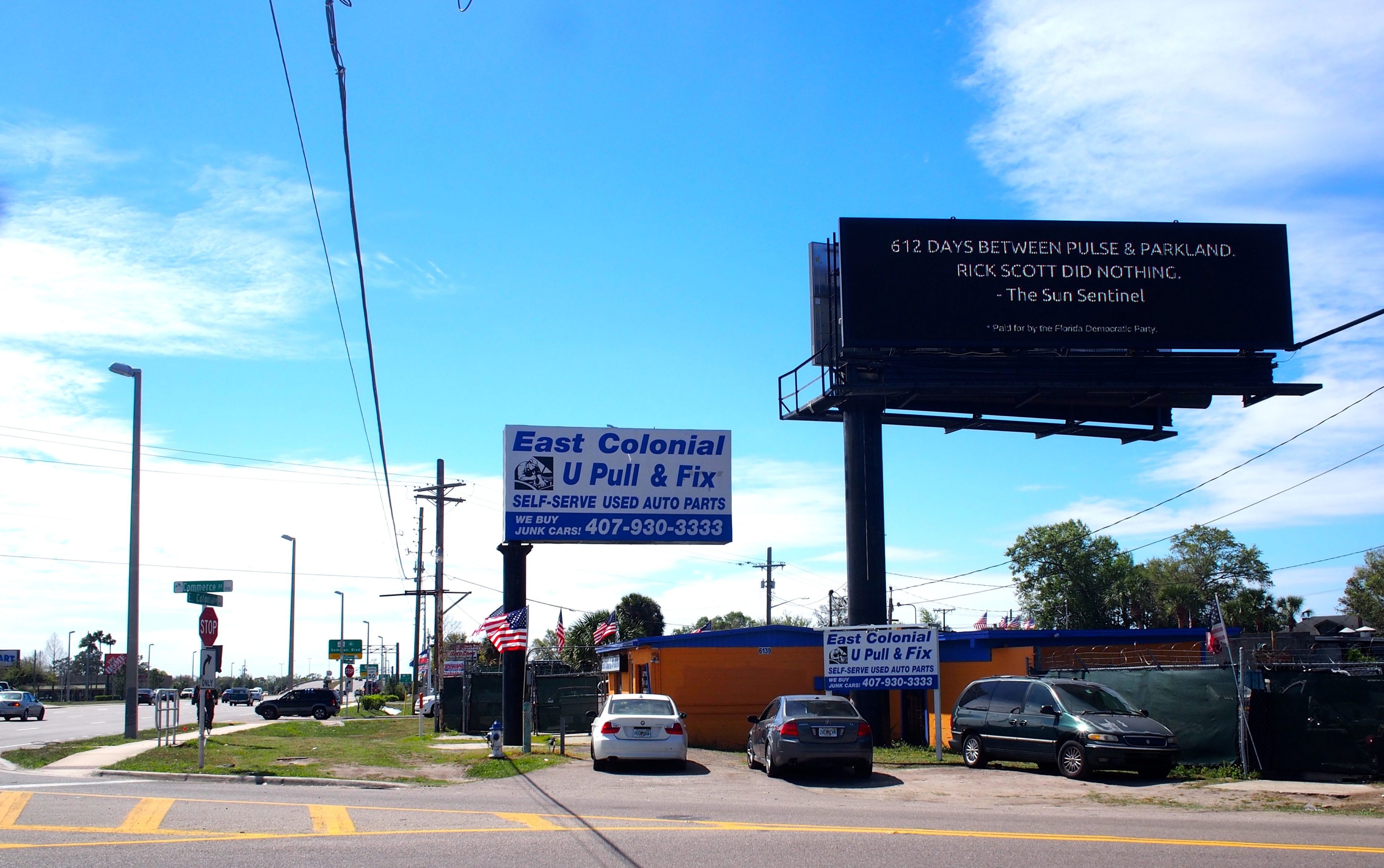 Democrats have launched billboards in Orlando and Tallahassee that declare that Gov. Rick Scott did nothing to address gun safety following the June 12, 2016, Pulse nightclub massacre in Orlando.

The Florida Democratic Party has leased two billboards, and the one in Orlando went live Friday. The message charges that the Republican governor’s commitment to addressing gun violence since the Feb. 14 massacre at Marjory Stoneman Douglas High School lacked in the days following the Pulse mass shooting.

Specifically, the 612 days that transpired between the two tragedies.

The Democrats’ message is one of several in rotation on that particular digital billboard in Orlando. It cites an editorial published in the Sun-Sentinel of South Florida and presents this message to drivers heading westbound on Colonial Drive toward downtown Orlando:

“RICK SCOTT DID NOTHING.

The billboard faces the route downtown from one of Orlando’s largest Hispanic communities, Azalea Park. Many of the 49 people murdered at Pulse were Hispanic as the mass murder occurred during the popular nightclub’s Latino night. That east-side community was particularly hard hit.

The Tallahassee billboard will go up at Magnolia Road and Mahan Drive, facing inbound traffic, and go live on Sunday.

“Rick Scott’s long record of opposing common-sense gun safety measures shows exactly who he is: a self-serving politician who says one thing and does the opposite — while Floridians pay the price,” Florida Democratic Party Executive Director Juan Penalosa said in a news release announcing the billboards.

“He broke his promise and did nothing to make Floridians safer from gun violence after the Pulse tragedy because he was more concerned about looking out for his political interests and the agenda of his gun lobby backers. Now he’s ignoring the clear calls from Parkland students and gun safety advocates by refusing to back an assault weapons ban.“

The Sun-Sentinel editorial that the billboard cited criticized Scott and President Donald Trump‘s responses to the Parkland shooting, as well as Scott for refusing to consider a ban on assault weapons in the wake of the Pulse shooting.

It didn’t explicitly refer to the period between Pulse and Parkland or enumerate the days.

The editorial stated: “After Sandy Hook, Pulse, the Fort Lauderdale airport shooting or any other mass shooting, Scott did nothing on guns or school safety.”

Scott’s office responded Friday with the following statement: “Following the terrorist attack at the Pulse Nightclub, Governor Scott proposed and took action on ways to make our state safer against threats of terrorism. The Governor proposed and then signed $5.8 million for the Florida Department of Law Enforcement to add 46 counterterrorism agents to the Terrorism Task Forces. This year, the Governor also proposed $1.3 million to the FDLE for incident command vehicles and emergency ordinance disposal vehicles to strengthen counterterrorism and intelligence efforts.”

previousJay Fant: Special Session may be needed for gun issues