The Democratic primary in Florida’s 5th Congressional District, a cartographical anomaly that sprawls from downtown Jacksonville west to Tallahassee, saw some moves this week by both incumbent Al Lawson and challenger Alvin Brown.

Lawson’s campaign showed its first signs of engagement, with the hire of self-styled “hip-hop lobbyist” Phillip Singleton as the campaign’s “senior advisor,” handling fundraising and outreach.

Singleton’s comments in the media release seem to suggest that Lawson’s efforts thus far in the campaign have been lacking.

“I am ready to hit-the-ground running and re-energize our donor and voter base,” said Singleton. “Congressman Lawson has the credentials and insight needed to put politics aside and bring the necessary resources back to Florida’s 5th Congressional District.”

Questions raised: was the donor and voter base somehow divested of energy? And how does one “put politics aside” in a Democratic primary.

Alvin Brown also is making moves, though it is difficult to tell if his latest will help in a Democratic primary.

“Most interesting lunch today with Ed Dean, host of the Ed Dean show, Florida’s #1 radio show, broadcast daily from 6 to 9 on AM 600 and FM 101.1 and Alvin Brown, who recently announced that he is running for Congress in the 5th Congressional District!”

Bowling is the former chief executive officer of Solantic Urgent Care, a company she cofounded with Gov. Rick Scott in 2001. After Solantic’s sale in 2011, Bowling joined the senior staff of Jacksonville Mayor Alvin Brown.

Dean’s listeners tend to be Tea Party/Trump Republicans, few of whom will vote in the Democratic primary in CD 5.

Brown, of course, is no stranger to outreach to the right wing — a triangulation strategy he used when running for Jacksonville Mayor.

In 2011, Brown won the Mayor’s Office with the help of GOP money and crossover votes.

In 2015, Brown attended a luncheon hosted by Billie Tucker, an activist known for Tea Party work and organizing the first Donald Trump rally in Jacksonville later that year.

In an ordinary Democratic primary, it would be easy to imagine a digital ad proclaiming Brown to be a tool of the right.

However, those with memories going back two years will recall Trump’s Florida co-chair Susie Wiles helping to pitch Lawson to Jacksonville media as he ran against Corrine Brown. 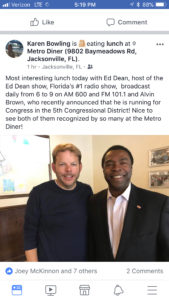 nextHouse Speaker Paul Ryan will not run for re-election