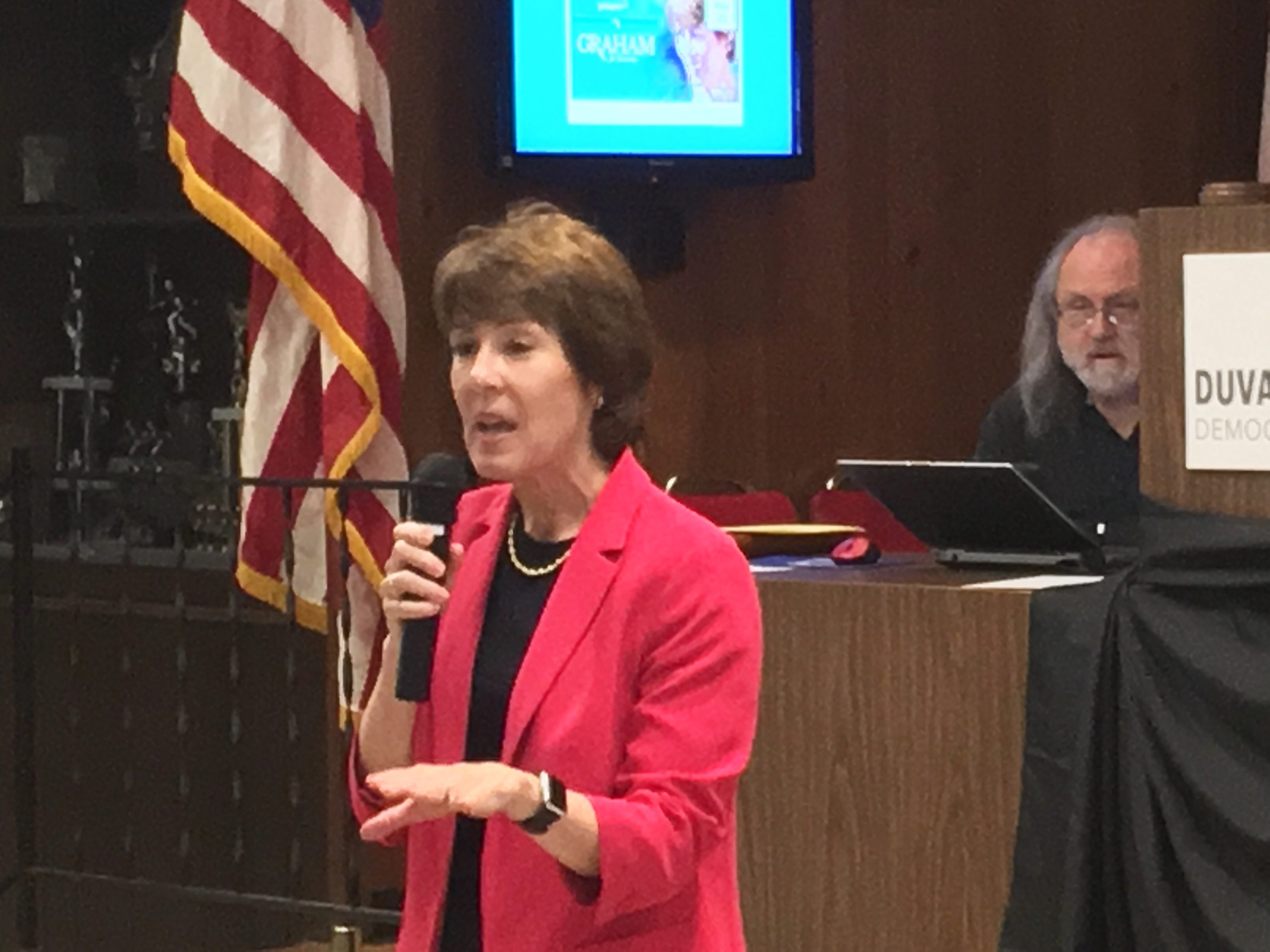 Many of those endorsements came months ago, before the ad blitz and poll surge of Miami Beach Mayor Philip Levine.

Graham seemed like an inevitable choice for the nomination before Levine’s television ad buys. In recent weeks, both private and public surveys have shown that Levine is ahead of Graham in voter-rich regions of the state, such as South Florida and the Tampa area.

In Jacksonville, Graham — once seen as a prohibitive frontrunner for the nomination — made at least one “comeback kid” posture, noting that in her 2014 race for Congress, some political reporters bet against her and others said she couldn’t win.

Graham also noted her commitment to progressive ideals in the remarks, including education, public option for health care, and gun control measures, before saying that “these things don’t matter if you can’t win.”

Graham espoused a commitment to the “67 county strategy,” a phrase also used by Levine. While a candidate has to do well in South Florida and the I-4 Corridor, “elections are won or lost north of Orlando.”

And Graham insisted that went beyond just Jacksonville, noting that presidential candidate Hillary Clinton “did well in Duval but got beaten badly west of here,” by way of making the case that the key is to “not get beaten so badly in places where Democrats have lost in the past.”

Graham wouldn’t speculate as to whether Levine could or couldn’t win 67 counties when asked.

“Look at the data, and you will see: the reality is you have to do well everywhere,” Graham added. “You can’t write off any part of the state and think there’s a path to victory.”

“I don’t pay attention to polls. The only poll I pay attention to is the people of Florida and the ones that I feel every day. The personal poll of the connection and excitement about having a Governor again in Tallahassee [who] will work for them every day,” Graham said.

She’s not feeling any urgency about getting spots on television either, saying she will be “on TV when it’s the right time to be on TV.”

Even as Levine has surged in the polls, Graham and her local endorsers most visibly messaged of late against not the front-runner, but against a third-party group supportive of Tallahassee Mayor Andrew Gillum that shredded Graham for being insufficiently progressive.

Earlier in May, the Collective Super PAC spent $782,000 on an ad attacking Graham as a fake progressive.

The ad says Graham voted against Obamacare and for the Keystone Pipeline, essentially stooging for Republicans at the expense of President Barack Obama.

Graham was “disgusted that Andrew Gillum would allow a secret-money group to run a false attack against a fellow Democrat,” and her Jacksonville Democrat surrogates likewise were appropriately umbraged.

Graham was no less disgusted Monday, saying — when asked about the “fake progressive” charge” that she’s “not a fake anything.”

“My disappointment in that … is that Democrats attacking Democrats is not what we should be doing,” Graham said.

“I’m very disappointed that there is that going on in this race,” Graham added, saying the attack was a “counterproductive” distraction from the post-primary inevitability of “full-out attack having people understand that the future of Florida is at stake.”

The proxy war between Graham and Gillum adherents, however, came at the expense of either candidate messaging against Levine, an increasingly urgent priority with the primary quickly approaching.

We asked Graham if Gillum and Chris King, both generally not keeping up with Graham and Levine in polls, if those two candidates were effectively stalking horses for Levine with questions about their political viability going forward.

“They will have to make decisions about their own campaigns,” Graham said, noting that she respects “anyone who wishes to offer themselves for public service.”

Graham does have the cash on hand lead, but lacks Levine’s ability to self-finance at will.

Democrats in Jacksonville and beyond are watching with ever-increasing interest, to see if Graham can or will take control of the narrative of this race.

Ultimately, the sales pitch for Graham seems to pivot on electability, and an ability to carry the Democratic message to places that haven’t listened in a number of election cycles.