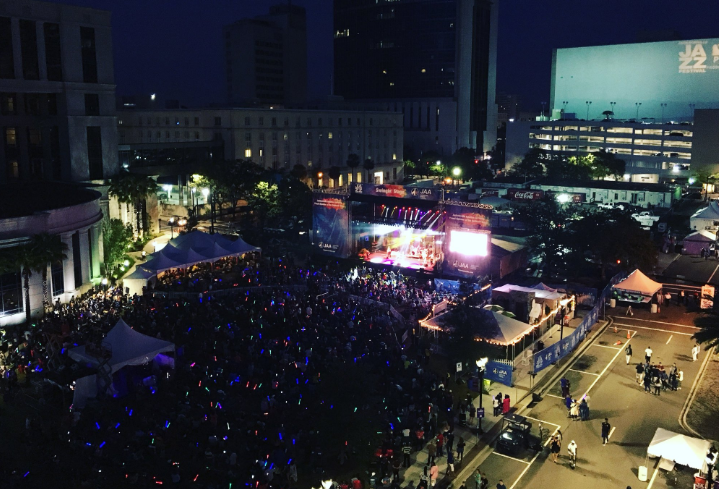 Jacksonville held another iteration of its yearly jazz festival over Memorial Day weekend, but a number of local politicians critiqued a scheduling decision for the well-attended event.

City decision makers did not use the Jacksonville Landing as a location for a festival stage; a move not altogether surprising given the continued legal back and forth between the city and Landing tenant Toney Sleiman.

Sleiman, a prominent political donor, set up an oppositional relationship with the Lenny Curry administration even before Curry was elected (by appearing in an ad for Curry’s 2015 opponent, then-incumbent Alvin Brown, concomitant with a Brown/Sleiman proposal to spend nearly $12 million on a teardown and rebuild plan for the declining Landing).

Since Curry’s election, the administration and Sleiman have not been able to agree on terms, and the city currently is moving to take possession of the waterfront mall from Sleiman, with each side claiming breach of contractual obligations.

While the back and forth continues in legal channels, politicians opposed to Lenny Curry used the move of a performance stage from the Landing to the “iconic” backdrop of the Duval County Courthouse as a launchpad for more holistic critiques.

Jacksonville City Councilman Garrett Dennis, a frequent Curry critic, took to Twitter to castigate the move, saying that his “community” did not see the courthouse as “iconic or welcoming,” but symbolic of oppression and injustice.

“Not surprising that Mayor Curry is playing politics once again. Last year, one of the Jazz Fest stages was at The Landing. Due to a personal vendetta, the Mayor has relocated the stage from The Landing (on the river) to the front lawn of the “iconic” courthouse,” Dennis tweeted. “In case he doesn’t know, my community doesn’t believe the courthouse is either iconic or welcoming. In fact, it’s a place that symbolizes struggle and injustice. Not to mention, the city will pay to restore the lawn after the Jazz Fest is over. Smooth (jazz) move, Mr. Mayor.”

Connell Crooms, one of a number of candidates vying to replace Curry in 2019, took to Facebook to call Curry a “racist bully” over the move.

“It seems for the sake of professional decorum, the people of color on city council are too afraid to say what black people in Jacksonville have long been saying: Lenny Curry is a racist bully,” Crooms asserted.

Crooms’ support for his claim includes citing the mayor as an “avid and unapologetic Trump supporter” who “brought Trump to Jacksonville not once but TWICE and has never criticized the president’s racist policies.”

“Curry used black entertainment (Jazz Festival) as a pawn in his personal spat with the tenants at the Landing, moving the stage to the courthouse billing it as an ‘iconic’ backdrop,” Crooms charged, saying that the incumbent has “bullied the people of color on city council to pass what he wants often at the expense of black citizens and working people.”

(Worth noting: Sleiman’s Jacksonville Landing staged the city’s first Trump rally in 2015, with Sleiman then serving as victory chairman for Trump’s local campaign, vowing to put Trump signs in “every shopping center” he owned.)

“Curry is a racist bully. In a city that’s over 30 percent black, we’re voting him out next year,” Crooms said. “Celebrate that.”

Diallo-Sekou Seabrooks, running to replace Katrina Brown on the City Council, lauded Dennis for speaking out.

“Glad to one city official mention the stage and courthouse. The rest will sit and say no big deal. Like the most of the public,” Seabrooks observed, adding that “some will excuse the oppressive manner it represents. Ignore the many protest[s] held on its lawn. Ignore the many wrongly accused. [In] my mind there is more wrong than good taking place in there!”

We are reaching out to the Curry administration for comment on these claims. Check back for updates.