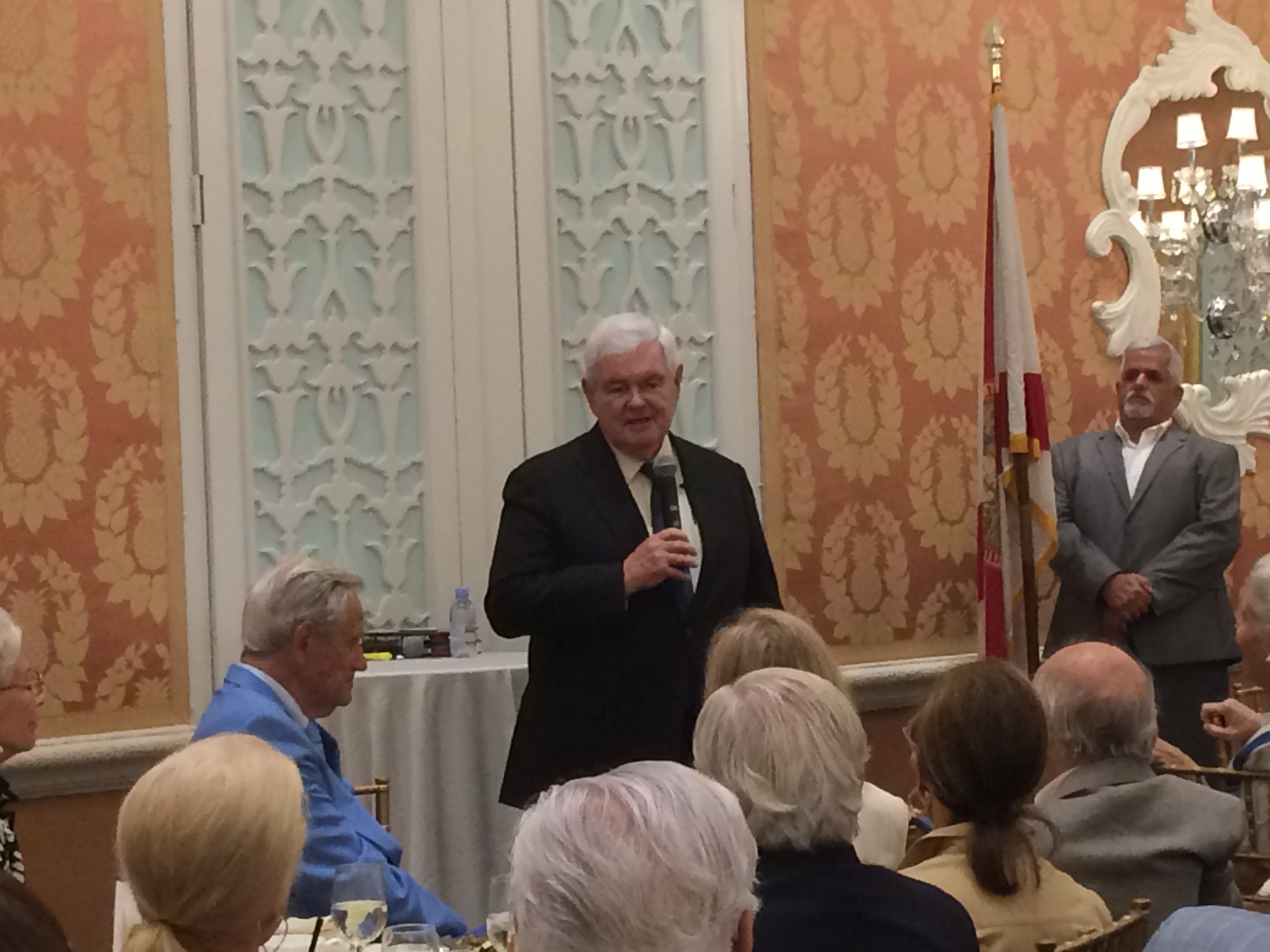 To hear Newt Gingrich tell it, America has a bright future just on the horizon, full of technological advances we never thought possible … if it wasn’t for those darn leftists.

That was the brunt of his message Thursday as the former House Speaker spoke at the Palm Beach Republican Club during a luncheon at The Colony Hotel.

“The moment we are in is among the most important in American history.”

Gingrich describes the current moment as “a cultural civil war” thanks to the left’s efforts to push values that “are antithetical to a free society.”

The framing of Democrats as the enemy was a constant through the roughly 45-minute talk. “Ronald Reagan defeated the Soviet empire, but he did not defeat Marxism on American college campuses. And the result was that at a time where we were winning over our foreign opponent, we were losing to our domestic opponent.”

That opponent, a socialist and Marxist ideology that was left unchecked, has now seeped into the Democratic Party and infected most of the government, according to Gingrich. “The system’s not working. What you have is a war.”

Gingrich argued that the left’s effort to expand government and regulation was standing in the way of technological breakthroughs. He raved about advances in stem cells, genetics and artificial intelligence.

But he spent the most time on the topic of on space travel, highlighting successes in the private sector and bashing NASA for falling far behind. He detailed Richard Branson’s work on Virgin Galactic, Paul Allen’s efforts to launch deliveries into space, and Elon Musk’s success at creating reusable rockets.

However, the Donald Trump-supporting Gingrich reserved his greatest support for an unlikely target. “The person who I think is the most interesting is Jeff Bezos,” who says he plans to spend his savings to spend people to space. Those savings are pretty hefty, as Bezos was listed the richest man in the world by Forbes.

Bezos has also been a constant target of Trump, with the president repeatedly bashing Amazon and The Washington Post, both of which are Bezos properties.

Contrasting the billionaires’ work to NASA’s efforts, Gingrich said, “It’s like watching a government bureaucracy design the last great stagecoach next to the transcontinental railroad.”

Unfortunately, in Gingrich’s worldview, the Democrats and their big government dreams just keep getting in the way. “There is a potentially stunning, extraordinary, exciting America just on the other side of the bureaucracy.”

To that end, Gingrich argued the only way to truly unlock America’s potential is to defeat liberals on the battlefield of ideas. He says one key to that goal is the Trump presidency. “What Trump represents is a breakthrough that begins to totally disrupt the principles and the assumptions of the old order.”

But with efforts to frame roughly half the country as the enemy, it’s not clear what the endgame is here.

Gingrich is right that the country is divided, with the Pew Research Center showing opposing party members growing increasingly distant. In his mind, the left started it, and he and conservatives are simply fighting back.

But does that battle end with more combativeness? Or, as historian Jon Meacham argued in a recent appearance in Palm Beach, do both sides need to tone things down in order to get back to solving the big issues of the day?

Gingrich clearly chose his side, supporting a president who has often gone on the aggressive against political opponents. Gingrich had high praise for Trump’s efforts, despite working in a jab at the president’s own ideology.

“I don’t know that Trump is in any serious way a principled conservative. But he is the most successful anti-left leader of my lifetime.”