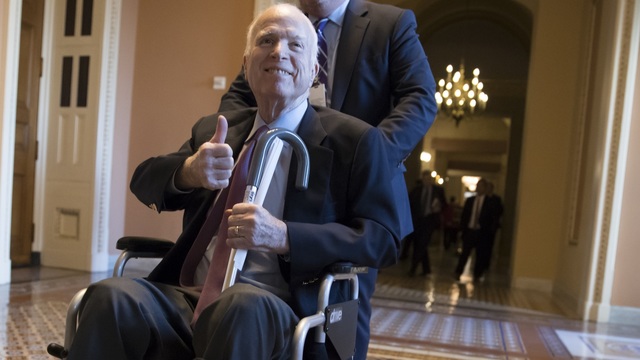 You would expect no less. The show of respect was good and proper for someone of McCain’s stature.

It would be even better if all of them actually followed his example and put country over party.

McCain knew that someone wasn’t evil just because they saw politics differently than he did.

There was a basic decency about him that incredibly was mocked as weakness by far too many people. Take Arizona Republican Kelli Ward, for instance.

Ward is running for the Senate seat being vacated by Jeff Flake, and she was no fan of John McCain. But when his wife announced Friday that he was suspending treatment for brain cancer, Ward and a campaign staffer engaged in a most disgusting conspiracy theory.

According to The Arizona Republic, when the staffer asked if the announcement by McCain’s wife was “just a coincidence,” timed to take away publicity from a planned campaign bus tour by Ward, she responded on her Facebook page, “”I think they wanted to have a particular narrative that they hope is negative to me.”

She took it down later and replaced it with a statement of condolence following McCain’s death on Saturday, but the damage was done. Screenshots of the initial exchange boomeranged around the country.

Ward, of course, blamed the media.

What does this have to do with Florida?

Maybe more than we realize as voters head to the polls for Tuesday’s primary elections.

Florida’s politics can be just as whacked as what’s going on in Arizona. Republicans in the Legislature have basically abandoned any pretense of working with Democrats for a balanced agenda. They wouldn’t consider statewide Medicaid expansion, no matter if it hurt the neediest among us. They have tried to tell us we need to be terrified if someone doesn’t look like us.

They stripped public-school budgets. They attacked the teachers union.

It’s worth recalling that McCain cast the decisive vote that kept his party from repealing the Affordable Care Act.

We used to think that wacko conspiracy theorists lived in their mother’s basement or in a cave somewhere, but now one of the foremost spreaders of conspiracy sits in the Oval Office, and Donald Trump’s approval rating in Florida is better than in most places.

After the slaughter at Marjory Stoneman Douglas High School, it was suggested that some of the student survivors were actually paid actors.

The Hillsborough County GOP organization posted a link to the mysterious “QAnon” social media site, which promotes Trump as a soldier in the battle against the “Deep State” trying to run him out of office. The link was later taken down, but why give that stuff any credence at all?

In Okaloosa County, Republican County Commissioner Graham Fountain routinely spreads anti-Muslim sentiments on social media, warning that if we elect any of them than Sharia law will follow.

Too many people actually believe that.

For too long, this kind of bile has been celebrated as “straight talk” by people who probably look back lovingly on the days of Sen. Joe McCarthy. That’s how we wind up with a serious candidate to become one of just 100 U.S. Senators suggesting the original “straight talker” John McCain timed his death to hurt her campaign.

Our social media feeds are filled with lies and distortions.

Our candidates think it’s enough to wrap themselves in the flag and platitudes, and if a media outlet comes up with a damaging story, well, you know the answer to that. Just shout “fake news” at the top of your lungs and go on about your day.

The question isn’t whether you’re red or blue. Most of us live in the middle anyway, but the pandering by candidates, at least in the primaries, is always to the extreme edge.

I don’t expect to agree with every position a candidate holds.

I vote for common sense.

Alas, it is getting harder to find.

nextSunburn — The morning read of what's hot in Florida politics — 8.27.18