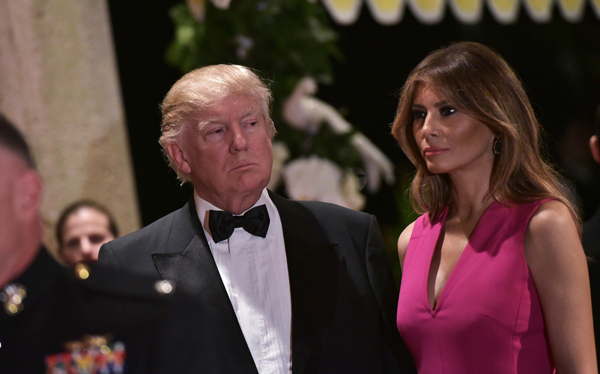 President Donald Trump has responded Thursday morning to mounting reports of high death tolls in Puerto Rico in the wake of last year’s Hurricanes Irma and Maria, contending in tweets that 3,000 did not die as a result, and such reports are the result of Democrats trying to make him look bad. 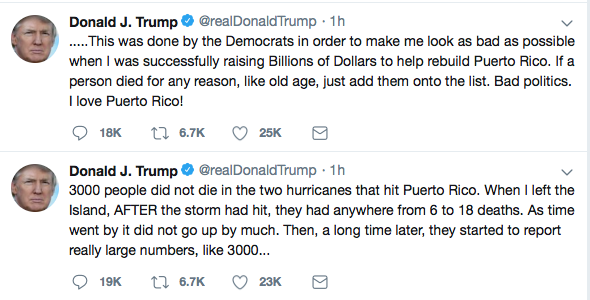 “3000 people did not die in the two hurricanes that hit Puerto Rico. When I left the island, AFTER the storm had hit, they had anywhere from 6 to 18 deaths. As time went by it did not go up by much. Then, a long time later, they started to report really large numbers, like 3000…” Trump tweeted Thursday morning.

Democrats and Puerto Rican activists are expressing stunned disbelief of Trump’s tweets. U.S. Rep. Darren Soto, a Democrat from Celebration whose district includes Florida’s largest concentration of Puerto Ricans and who is of Puerto Rican descent himself, accused Trump of “dancing on their graves to disguise your tragic incompetence.”

Republicans scrambled to accept the 3,000 figure as a believable estimate without sounding overtly critical of the president’s tweets.

Democratic gubernatorial nominee Andrew Gillum tweeted, “No death is partisan and our brothers and sisters in Puerto Rico deserve better from @realDonaldTrump before, during and after the hurricane.”

Democratic U.S. Rep. Val Demings of Orlando called the tweets “awful” and declare that Trump “has once again made it all about him.”

Republican Gov. Rick Scott, running for the U.S. Senate this year, said he disagreed with Trump and declared “the extent of lives lost as a result of Maria is heart wrenching.”

U.S. Rep. Ron DeSantis, the Republican nominee for governor and a staunch Trump supporter, “doesn’t believe any loss of life has been inflated,” and is “committed to standing with the Puerto Rican community,” according to his campaign.

And Republican U.S. Sen. Marco Rubio essentially defended the 3,000 estimate, and cautioned everyone to stop playing politics over it.

Said state Sen. Victor Torres, an Orlando Democrat who also is of Puerto Rican descent, called Trump delusional. “This president cannot admit that he did not do all that he should have done to help those in the dire situation on the island. It’s a wonder he can still pound his chest and say he was outstanding in what he did, and not realize he failed, he failed the Puerto Ricans miserably.”

A separate study by Harvard University researchers, predicted the government estimate. Released in May, the Harvard study analyzed the probabilities of Puerto Rico deaths with and without the storms concluded the range of difference would be anywhere 793 to 8,498 additional deaths, and set its estimate on 4,645, as the statistically most-probable point. That study was conducted by a collaboration of researchers from the Harvard T.H. Chan School of Public Health, Carlos Albizu University in Puerto Rico, and the University of Colorado School of Medicine.

“This was done by the Democrats in order to make me look as bad as possible when I was successfully raising Billions of Dollars to help rebuild Puerto Rico. If a person died for any reason, like old age, just add them onto the list. Bad politics. I love Puerto Rico!” Trump tweeted.

Trump’s tweets come as the Carolinas prepare for the next monster hurricane, Hurricane Florence, bearing down for a strike tonight or tomorrow.

Soto’s full tweet, “Mr. President: we had nearly 3000 Americans die in Puerto Rico due to your slow, failed response to Hurricane Maria. And now you dance on their graves to disguise your tragic incompetence.”

Demings tweeted: It’s times like these when we need the President to lead. But once again he has made it all about him. The death count from #Maria is real. Thousands of Americans in Puerto Rico died as a direct result of the storm. When America faces a tragedy, we HAVE to come together.

Scott’s full tweet: I disagree with @POTUS– an independent study said thousands were lost and [Puerto Rico] Gov. [Ricardo] Rosselló agreed. I’ve been to Puerto Rico 7 times & saw devastation firsthand. The loss of any life is tragic; the extent of lives lost as a result of Maria is heart wrenching. I’ll continue to help PR

“These days even tragedy becomes political. 3k more Americans died in #PuertoRico after Hurricane than during comparable periods before. Both Fed & local gov made mistakes. We all need to stop the blame game & focus on recovery, helping those still hurting & fixing the mistakes,” Rubio tweeted.

Nelson’s full tweet: The president’s comments on the nearly 3,000 American lives lost in Puerto Rico are shameful. We deserve and expect more from someone who holds the highest office in our country.

“Ron DeSantis has always worked to help the Puerto Rican community, both on the Island and here in Florida. As Chairman of the National Security Subcommittee, he conducted an oversight hearing earlier this year to identify deficiencies in the federal response to Hurricane Maria. He has worked alongside Rep. Jennifer Gonzalez-Colon to secure support for rebuilding efforts. In August, he visited the island to meet with elected leaders and get the latest briefing from FEMA regarding recovery efforts. Ron DeSantis is committed to standing with the Puerto Rican community, especially after such a tragic loss of life. He doesn’t believe any loss of life has been inflated. Ron is focused on continuing to help our Puerto Rican neighbors recover and create opportunities for those who have moved to Florida succeed.”