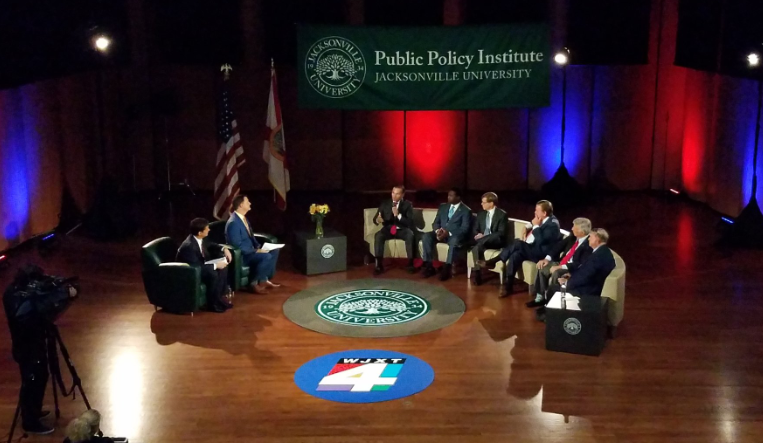 Consolidation brought an efficiency of services, but came with a price. African-Americans were divested of political power, and promises were broken regarding extending the same quality of city services to those older neighborhoods as new construction developments enjoy.

Despite there being a long way to go, the mayors generally offered endorsements of Jacksonville’s radical experiment in government — even as Godbold and Brown spotlighted flaws in the bargain that have yet to be fully resolved.

The “strong mayor” form of government predominates in Jacksonville, vesting particular power in the executive; in that context, the mayors were able to tell their stories of using the prerogatives of the office to accomplish goals.

Godbold, mayor from 1979 to 1987, noted that there was a point in time when he served on two separate City Councils, with one running the city and the other restructuring local government.

“We’re lucky that we have this many former mayors. Ed Austin and my mentor, Hans Tanzler, the first mayor of consolidation, have passed on. They were all great mayors, and we’re lucky in that fact,” Godbold said.

There was, said Godbold, “a lot of corruption” in that pre-consolidation government — but there were also electoral concerns.

“We were going to be a black city,” Godbold said, adding later “we didn’t think it was going to pass,” which was why the Beaches and Baldwin got to have their own mayors.

Godbold, who had been City Council President, had little use for that role — but “had a hell of a lot of fun being mayor – it was the authority to make things happen.”

Godbold also noted that tax cuts in the early days of Consolidation forced government to run “on the cheap” and “spend a lot of time catching up.”

“We spent a lot of money and a lot of time on downtown, but out in those core neighborhoods we have not kept our promises. Out in those poor neighborhoods, they’re still living in crap like [before Consolidation],” Godbold said, drawing applause from the crowd.

Hazouri’s major accomplishment — getting rid of tolls on local roads — could not have happened, he said, without the strong mayor form of government.

“I’ve heard over and over again what we didn’t do in the core city… we still have many miles to go,” Hazouri said, but noted that there has been spending over the years in Northwest Quadrant and elsewhere.

Delaney, mayor from 1995 to 2003, noted that the mayors in those early decades remedied the city’s inferiority complex.

However, neighborhoods suffered. Mandarin and other neighborhoods, which would otherwise have been their own cities, were subordinate to the larger vision.

“Absent Consolidation, these neighborhoods would be in a lot worse shape,” Delaney noted.

Peyton, who served from 2003 to 2011, noted the challenges of dissolving city and county government and take the “risky step of trying something different” was “phenomenal.”

“Downtown is one of the casualties,” Peyton said. “Mayors get the vision, [but there’s] no groundswell of support.”

Brown, the first African-American mayor from 2011 to 2015, said, “Consolidation set the tone and the strategy for the 20th century” and “allowed Jacksonville to compete in the global economy.”

Brown did note that “some people felt left behind” by the model, offering a discordant note to the positive boosterism.

“Consolidation really took an opportunity away to have a black mayor and black city, bottom line,” Brown said. “There are parts of our community — older neighborhoods, looking for septic, sewer.”

Brown kept returning to the theme of doing more for those older communities, perhaps setting the stage for a future citywide campaign — or at least testing talking points.

Brown also was alone in saying that the beaches and Baldwin could “go it alone,” allowing for a truer consolidation.

“I think that the spirit of consolidation is ‘one city, one Jacksonville’… we’ve got a long way to go to meet that ideal, and everyone on this stage is committed to that ideal,” Curry asserted.

Curry noted that pension reform — a signature accomplishment of his tenure — could not have happened without a strong mayor form of government.

“Without a strong mayoral form of government, I would not have been able to pull people together, crystalize ideas, and take them to City Council and Tallahassee in very public campaigns,” Curry said.