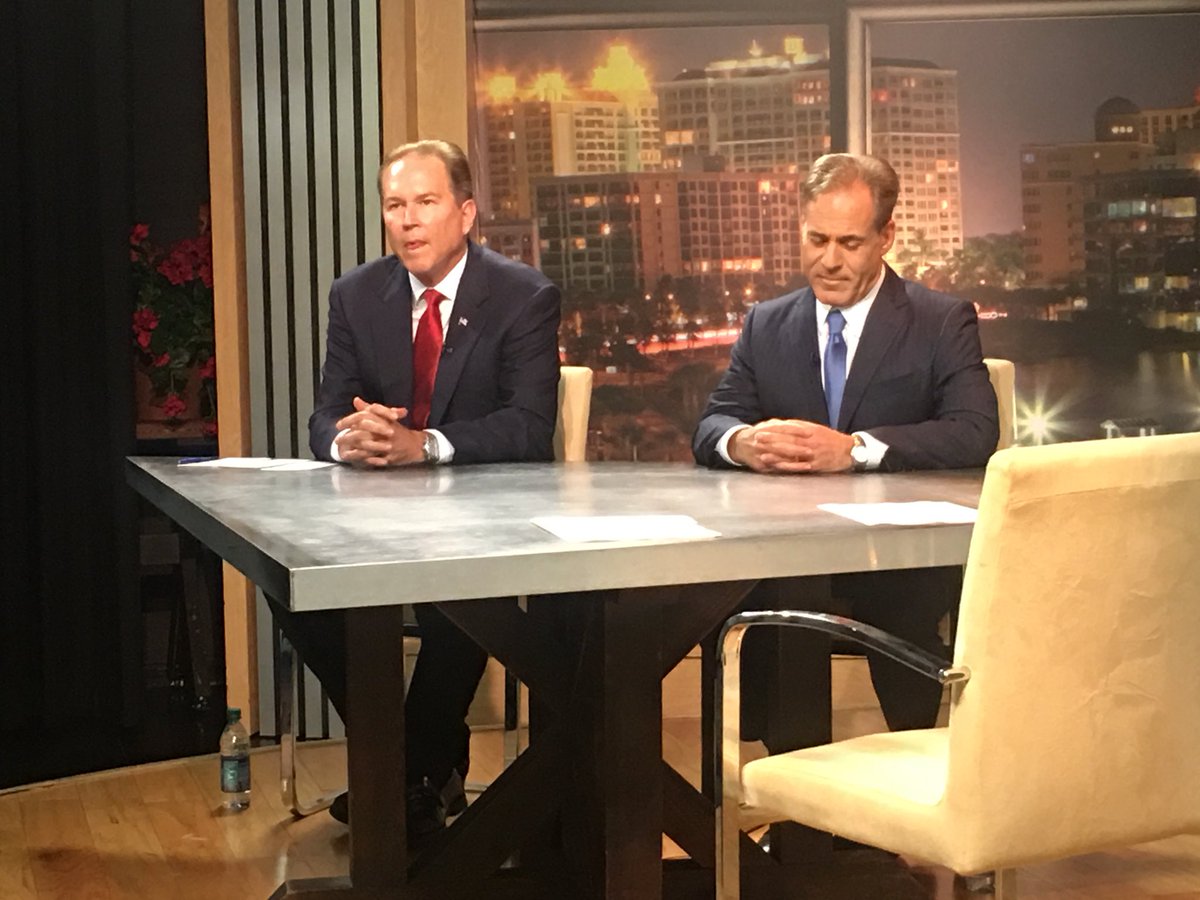 Republican Rep. Vern Buchanan and Democratic challenge David Shapiro didn’t agree on much in a televised debate, but both feel the other guy would definitely put Social Security and Medicare for seniors at risk.

ABC-7 WWSB on Tuesday night hosted a debate between the candidates in the heated race to represent Florida’s 16th Congressional District.

The most heated exchange of the night surrounded immigration and whether President Donald Trump should send military to guard the border from a Central American caravan.

Buchanan accused Shapiro of supporting open borders, and said “7,000 people will lead to 700,000.” Shapiro pushed back and said that was not true. Moments before, he called for funding more border agents to vet individuals. “Some of the language used around this is divisive and it’s fear mongering.”

In a testy exchange, Shapiro asked Buchanan, “Do you shoot them? These are families trying to get away.” Buchanan responded, “No you don’t shoot them,” but maintained a need for border security.

When host Alan Cohn asked Buchanan about red tide and whether the incumbent should return any donations he’s received from the sugar industry, Buchanan demurred and said if someone wants to support his campaign that’s fine. But he said his environmental record was what mattered. He noted he successfully got $8 million for red tide research in a new water bill that the president is expected to sign tomorrow.

Buchanan said he’s got a long history, serving on Mote Marine Laboratory’s board of trustees long before holding office while Shapiro was an “Election Day environmentalist.” Shapiro, though, said he’d worked to help the environment his whole life. “I’ve never denied climate change,” he said. “I believe in science.”

On the economy, the candidates disagreed fundamentally on the state of affairs in the district right now.

Buchanan said tax reform and regulation under President Donald Trump and that a tax cut passed last year gave 90 percent of people a $2,400 deduction. Shapiro said rising health care costs erased those gains, and only businesses and corporations benefitted from the tax cut.

Buchanan said from his conversations with small business owners, the economy seemed to growing at a clip thought unthinkable when President Barack Obama was president. “In terms of workers, [employers] are having to pay more and with the economy growing like it is, to attract better people they have to pay a lot more to do it.”

Outside of ABC-7, Buchanan supporters wearing red, white and blue stood on one side of station gates while protestors affiliated with Floridians for a Fair Shake stood on the other wearing captain’s hats and waving signs reminding of a yacht purchase Buchanan made as the tax package went through.

The boat never came up in the debate, but Shapiro did say Buchanan voted to give himself a “$2.1 million tax break while working families are frustrated.”

Buchanan said Shapiro has run a purely negative campaign. “I’m not up there to feather my bed,” the incumbent said. “He’s a trial lawyer who sues seniors and everyone else in this community, a lot of my business friends.”