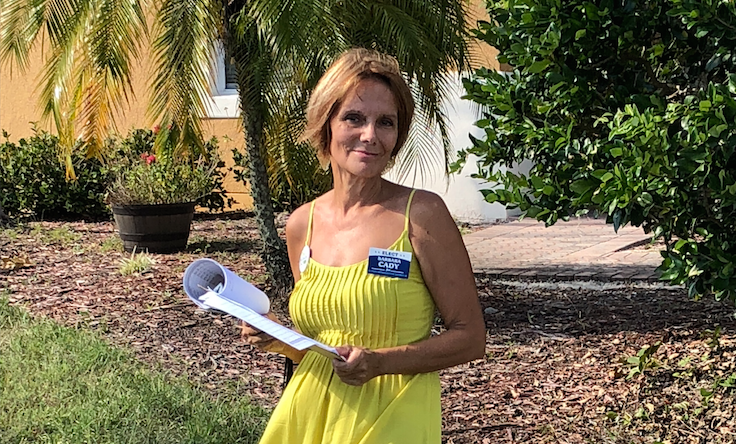 Can a single issue of the most local of impact become a game-winner for a Democrat trying to flip a district?

Democratic Florida House District 42 candidate Barbara Cady has been pounding turf since she entered the contest 16 months ago, mostly talking about home-owners association law reform. It’s a common interest in the sprawling development areas of HD 42, particularly for many residents of Poinciana, where there’s been long-running and highly contentious legal and public fights between homeowners and an umbrella group governing homeowners associations there.

“I do believe it is a critical issue in this race and my opponent apparently does too, because suddenly he’s put out a flier saying he’s sponsoring a bill to ‘reign in HOAs,’ which is very contrary to his behavior the last three years,” Cady said.

Her opponent is three-term Republican state Rep. Mike La Rosa of Saint Cloud. He agreed that HOA reform is an issue in the district, but refuted Cady’s charge that he’s new to it with his latest campaign mailer, which cites legislation to “rein in out-of-control homeowners associations.” That, he said, is a reference to his 2013 bill, which passed to reform home-owners association laws. And, he said, he also filed bills in 2014, and ’15 seeking additional reforms, although they did not pass.

Yet La Rosa downplays how critical the issue might be to this election. He argued that HD 42 residents, like most others in Florida, are first and foremost interested in statewide issues of jobs, education and opportunities for their children. And he said he thinks the Poinciana HOA situation has gotten better in recent years because he has not heard any serious complaints for a while.

“At the end of the day, jobs and education are still number one,” La Rosa said.

“I would hate for my opponent or anyone to try to take this one issue and highlight it to say, ‘This is what I am running on,’ and ignore everything else,” he added.

Cady, of Kissimmee, is running on a broader slate of issues too, albeit from the Democratic platform that defines them as higher-paying jobs and public education.

But yes, for her, the overriding issue, the one she expects to make a difference, is whether homeowners respond to a candidate crusading to reform HOA laws, promising to provide relief and protection from what she says many residents complain are predatory HOAs. That’s an especially common and deep-rooted complaint in Poinciana, where the issue has been heated for decades, she said.

This is actually what Cady does for a living: she is a licensed HOA manager.

“This is why this issue is important for this election: it’s not just Poinciana. Miami has the same issues. The entire state of Florida is being run by corporate developers that have pretty much had free-rein for an exorbitant amount of time,” Cady said. “So my feeling is we need to put time limits on it [developer’s control over HOAs.] And we need to tighten the statutes to protect the homeowners. That’s the way it should be. Right now it seems like it is protecting developers.”

Founded in the 1970s, Poinciana stretches a good 15 miles through southwest Osceola and east Polk counties. It is becoming a heavily Hispanic community, populated by a large influx of Puerto Ricans. Population estimates run between 53,000 and 83,000, depending on how the unincorporated community is defined.

HD 42 sprawls across most of Osceola County [not including most of Kissimmee and Celebration], plus a good chunk of eastern Polk County, covering more than a thousand square miles. HD 42 represents four of Poinciana’s nine villages. The others are in House Districts 41 and 43.

Cady said she frequently hears horror stories of battles between residents and the Association of Poinciana Villages, the umbrella group over Pinciana’s nine village HOA’s. She said those stories focus on what residents say are unfair fees, fines, liens, and foreclosures, and of residents being shut out of HOA decision-making.

Similar allegations against the Association of Poinciana Villages and the developer, now AV Homes, are charged in a lawsuit filed in 2015 by Friends of Poinciana Villages, an organization formed to represent a group of frustrated homeowners. That suit also alleges fraud, election violations, and breach of a 1985 contract that the Friends organization argues required the company to relinquish control a long time ago. The company denied all the allegations in its responses, and also argued that the company and the homeowners association are wholly independent of each other, so that the company cannot be blamed if anyone thinks the HOA is not acting properly. The suit still is being litigated in Florida’s 10th Judicial Circuit, in Polk County.

Two Democratic lawmakers who represent all or parts of Poinciana, state Sen. Victor Torres and state Rep. John Cortes, who represents House District 43, also have been active in the issue. They both have introduced bills seeking HOA law reforms that would impact Poinciana. In particular, the bills would set up an arbitration process for disputes between homeowners and HOAs. But the bills died quick deaths. Cady pledged to join their effort.

“The issue that we have is the homeowners are very frustrated that they don’t have control,” Cady said.

The HD 42 election contest should be no cakewalk for anyone.

La Rosa has the advantages of incumbency, name recognition, and presumably popularity in a district he’s represented for six years. He’s also got a mountain of money, raising nearly $300,000 for his re-election, through the Oct. 19 reports. He has spent it generously, more than $225,000 to date, about half of that just in the past month. La Rosa has put up television, radio, and digital advertising, and sent out numerous mailers. Cady, by contrast, had raised about $58,000 and spent all but $5,000 of that through the most recent campaign finance reports, through Oct. 19. Her money has mostly gone toward digital advertising and mailers.

Cady has the advantage of the voter-base makeup. The district has been trending blue for a while in voter registration, and in the book-closing for the Nov. 6 election, Democrats have 37 percent of the electorate, Republicans just 31 percent.

“Here’s the issue I have with La Rosa: He is nowhere to be found, and people are very frustrated with that,” Cady charged. “When I ran against him in the beginning he didn’t take me seriously. And now that the numbers are looking a little more favorable for Democrats, he has stepped up his game, and he just put out this flier that says he has fought for legislation that would rein in HOAs, and that he is there for Poinciana, and he has been there for Poinciana.

“Those,” she alleged, “are just flat-out lies.”

La Rosa strongly disputes that. A key part of the issue, said La Rosa, whose background is in real estate, is that Poinciana’s HOA is probably one of the most complex in the state, maybe in the nation.

But he added, “The truth of the matter is, at the end of the day, HOAs are contractual relationships in which someone knowingly purchases, knows what the structure is, and has to sign the disclosures, and so forth.

“And when I talk to folks of what the problem is, I think 90 percent of the time it comes down to, OK, get involved, and vote in new board members,” La Rosa said.

nextLast Call for 10.30.18 — A prime-time read of what's going down in Florida politics