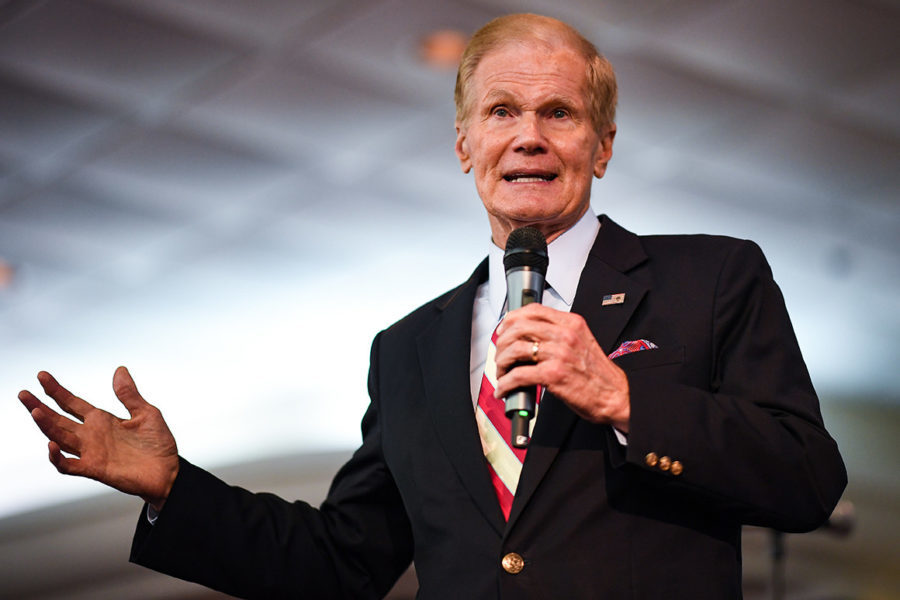 Sen. Bill Nelson formally brought to a close his recount fight in the race for Florida’s U.S. Senate seat and conceded to Republican opponent Rick Scott.

“I was not victorious in this race but I still wish to strongly reaffirm the cause for which we fought: A public office is a public trust,” said Nelson.

Nelson made his public statement shortly after a hand recount of over and undervotes statewide drew to a close.

Scott released his own statement recounting the conversation between the men.

“I just spoke with Senator Bill Nelson, who graciously conceded, and I thanked him for his years of public service,” said Scott.

Nelson’s lengthy statement thanked the people of Florida for entrusting him for decades.

“Well, things worked out a little differently than Grace and I had hoped. But, let me say, I by no measure feel defeated,” he said.

“And that’s because I have had the privilege of serving the people of Florida and our country for most of my life. And I don’t think anyone could have been as blessed. It has been a rewarding journey as well as a very humbling experience.”

But that’s not close enough for any pending litigation to realistically eliminate the gap.

In truth, Nelson’s chances at victory, however slim, seemed dashed once Broward County completed its manual inspection of undervotes. Nearly 25,000 fewer votes were cast in the heavily Democratic county for the Senate race than for Governor, despite the federal race appearing first on the ballot.

Most attribute that to poor ballot design, which put the Senate contest in a column below voter instructions, but Nelson attorney Marc Elias suggested a machine calibration issue left thousands of votes uncounted.

Had that been the case, it should have been remedied in a manual recount of votes. Instead, Nelson picked up just 410 votes in the hand tabulation.

Nelson thanked campaign staff for support through the campaign and the recount process.

“First, I want to say thanks to all of you who rallied to our cause, you walked the precincts, knocked on the doors, made phone calls, and contributed your time and your resources. And with an optimistic heart, I wish to say something else: We may have been heavily outspent in this campaign, but we were never outworked.

“To all Floridians, whether you voted for me, or for my opponent, or you didn’t vote at all, I ask that you to never give up this fight.”

Nelson’s concession signals the close to an 18-year Senate career and a dramatic turnaround in electoral fortunes for the long-time Florida politician.

In the year 2000, as Democratic presidential candidate Al Gore lost by 537 votes to Republican George W. Bush after a historic statewide recount, Nelson won his Senate run over Republican Bill McCollum by 284,747 votes, almost five percent of the vote.

In 2006, he defeated Republican Katherine Harris by more than 22 percentage points, and in 2012, he beat Republican Connie Mack IV by 13 percent.

Both of his previous re-election campaigns took place in strong Democratic years, as did this one, but his decades of experience could not fend off a challenge by Scott, who pumped nearly $70 million of his personal fortune into the Senate race this year.

This marks a third straight statewide win for Scott, this time by his narrowest margin, even as he claimed a majority of votes for the first time.

Scott ran a campaign praised for discipline and for its outreach to Hispanic voters. While the Latino vote nationwide continues to trend Democratic, Scott’s relationship with Puerto Rican and Cuban leaders helped him maintain a strong performance in the Sunshine State.

The Republican Governor took time off the campaign trail to mark the anniversary of when Hurricane Maria made landfall in Puerto Rico, and he tallies endorsements from island officials.

Meanwhile, his campaign aggressively painted Nelson as an out-of-touch pol who overstayed his welcome in Washington.

As Nelson leaves the scene, he outlined policy positions he hopes endure beyond his time in office.

“You must fight to protect the fundamental right to health care and against any attempt to rollback our progress on things like pre-existing conditions. You must fight to preserve the natural wonders of this state, from the Everglades to the Pine Forests to the beaches and offshore waters. Say ‘no’ to drilling — not one rig off our coastline.”

He also alluded to his trip to space as a Congressman in 1986, a journey that earned a spot forever in NASA’s manifest of astronauts.

“As a country, we need to continue to launch rockets and explore the heavens. I have seen the blue brilliance of the earth from the edge of the heavens.  And I will fight on to save this planet, our homes and our cities, from the spreading plague of the greenhouse gases that infect our atmosphere, and play havoc with our weather, and risks the planet our children and grandchildren will inherit.”

While being called the last of the Florida moderates, he touted a record of progressive votes in Washington.

“Every single one of us needs to keep fighting to strengthen Social Security and Medicare, for the generations that are there and to come.  It’s your Medicare, it’s your Social Security; you pay into those programs. They belong to you, and not to the politicians who are plotting to rob your retirement.

“I will continue to fight on and on for the inalienable human rights that are the soul and glory of the American experiment: civil rights, women’s rights, LGBT rights, and the sacred right to vote.”

And he made reference to the recount that marked this dramatic end to his Senate career.

“We must end all forms of voter suppression, make it easier for Americans to vote, and honor the ideal that we are governed by the majority and not by the minority rule.”

As for his future, he left unclear whether he has another political run in him but said he would not bow out of public life.

“Yes, I will continue to fight hard for what’s right, and I will also encourage others to seek common ground with their colleagues on the other side of the aisle.

“Inevitably, at times, that effort will fall short. But we have to try. We have to move beyond a politics that aims not just to defeat but to destroy; where truth is treated as disposable, where falsehoods abound, and the free press is assaulted as the ‘enemy of the people.’

“There’s been a gathering darkness in our politics in recent years. My hope today can be found in the words of John F. Kennedy, who said civility can guide us through that darkness to a safe and sane future.

“Thank you, all. God bless you, and God bless our country.”

“From day one Rick Scott never wavered. He was a great Governor and will be even a greater Senator in representing the People of Florida. Congratulations to Rick on having waged such a courageous and successful campaign!” he tweeted.

“Senator Bill Nelson has led with integrity, humility, courage, and vision – always putting the best interests of Floridians first. From fighting for better schools and health care, to protecting our environment – Senator Nelson has always stood for what is right. Florida is better because of his leadership,” she said.
“We want to thank Senator Nelson for his years of service, and his leadership to our party. The sacrifices he made to serve this state, and our nation, will not be in vain.”

Elias, with the recount behind him, also said kind words about Nelson. “I am incredibly proud of Senator Nelson. Representing him has been an honor. During the recount, the margin narrowed but did not close. Thank you to the election officials for their diligence, and the volunteers and staff who worked to ensure that every lawful vote counted.”

Chris King, the Democratic lieutenant governor candidate this year, said, “Because of Senator Nelson, Florida families enjoy beaches and coasts free of oil rigs, and our children still dream of touching the stars. Thank you, Senator, for your public service.”

Well, things turned out a little differently than we had hoped, but I by no means feel defeated. That’s because I’ve had the privilege of serving the people of Florida for most of my life. It’s been a rewarding journey and a very humbling experience. No one could be more blessed. pic.twitter.com/aGIf5nFcyZ