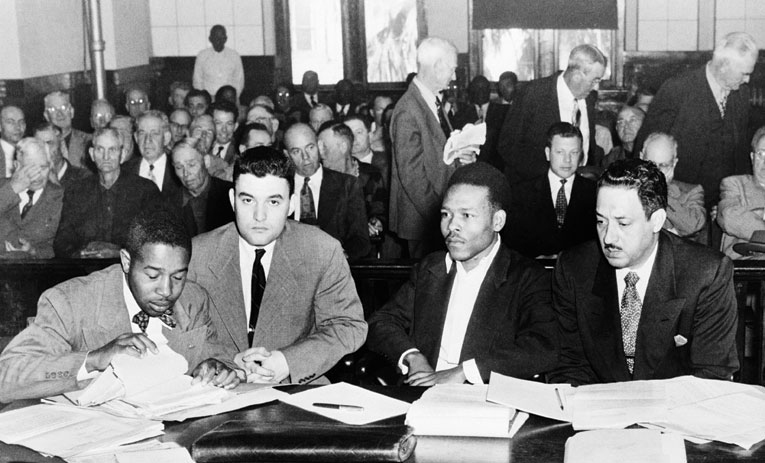 The Groveland Four were pardoned Friday by the Florida Executive Clemency Board.

The unanimous action of the board, the Florida Cabinet, came Friday nearly 70 years after one of the most infamous cases of Jim Crow-era racial injustice began, and just three days after Gov. Ron DeSantis replaced Gov. Rick Scott, who had ignored calls for him to act in the matter.

It came despite reports that DeSantis’ first inclination was to not act on the matter Friday but to just hear reports. He first indicated he may be ready to go forward during a press availability prior to the meeting in which he told the media to come and see what happens.

What happened at the meeting of the Executive Clemency Board was an emotionally fraught lineup speakers, including family members of the Groveland Four, who came to declare their innocence, based on evidence that came to light after their trials.

The lineup also including Norma Padgett Upshaw of Lake County, who, as a 17-year-old, had accused four young black men, Ernest Thomas, Samuel Shepherd, Walter Irvin, and Charles Greenlee of raping her at gunpoint one 1949 night on a country road in Lake County. Upshaw, now 86, spoke publicly Friday for the first time since the trials, and insisted everything she said was true. And she rejected pleas from other speakers, family members of the four, including one who had turned to her and called her a liar.

Yet the four cabinet members, DeSantis, Attorney General Ashley Moody, Agriculture Commissioner Nikki Fried, and Chief Financial Officer Jimmy Patronis, largely set her testimony, and that of several of her family members, aside, focusing on evidence that the law enforcement operations and trials of 1949 and 1951 were wrought with clear evidence of injustice. DeSantis, Moody and Fried all cited the injustice and followed the testimony quickly with a vote to issue pardons.

The pardons were issued not just to the two who had been convicted and imprisoned, Irvin and Greenlee, but also to the two who were killed earlier, Thomas and Shepherd.

“Most of what we are looking at are the actions of the officials, government officials acting on behalf of Lake County and the state of Florida, for what was termed by the leading Supreme Court Justice of his generation, Robert Jackson [who served on the U.S. Supreme Court from 1941-54], [as] one of the best examples of one of the worst menaces to American justice,” DeSantis said.

“You like to think in America no matter what passions or prejudices are on the outside of a courtroom, when you actually get into that courtroom that it’s the law applied to the facts, without passion or prejudice that will decide your fate. I don’t know that there’s any way that you can look at this and think that those ideals of justice were satisfied,” he continued.

“Indeed, they were perverted, time and time again,” DeSantis added. “I think the way that this was carried out was a miscarriage of justice.”

While DeSantis characterized the pardons as an act of belated justice, family members and other advocates of the Groveland Four saw it as long-sought exoneration.

“My father was not there. The evidence, the proof, is in the record that he was not there. He was accused, put in jail, tortured for something that he did not do,” said Charles Greenlee’s daughter, Carol Greenlee, 69.

“Pardon is not the right word. The right word is exonerate, because it never happened,” said Irvin’s cousin Beverly Robinson.

It was Robinson who at one point turned toward Upshaw and her family and accused them of being liars. Robinson did that saying that as an education professor at Lake-Sumter Community College in 1997 she had a student who was a Padgett family member who wrote an essay in her class accusing her family of lying, giving, Robinson said, “a detailed account of what happened”.

“You all are liars,” she said to them.

Upshaw was joined by two of her sons and a daughter in disputing Robinson, and disputing all others who contended the Groveland Four case was corrupted into creating false convictions during the racist Jim Crow era.

Upshaw said she would tell the same story today she told at the trials, that she was raped at gunpoint by the four.

“We thank you for your statement,” DeSantis replied.

Upshaw, who now uses a wheelchair, didn’t speak with reporters but could be heard saying “they had their minds made up” as she left.

When asked afterward if she had in fact made up her mind before Friday’s meeting, Fried said she “had already reviewed all the material that has been presented to me.

“I knew that there was no additional evidence that was going to come to light today,” she added. “I had been briefed on all the different parts (of the case). I’ve been a defense attorney, and I saw no evidence that changed my mind.”

Upshaw’s story had appeared to begin falling apart beginning in the early 1950s. Evidence unearthed and released by the FBI in ensuing years revealed a widespread pattern of what author Gilbert King told the board included “manufactured evidence, perjury, witnesses being hidden from the defense, and prosecutorial misconduct that was rampant,” along with confessions, later renounced, brought about through jailhouse beatings. King wrote the book “Devil In the Grove”giving a detailed historical account of the case, and won the Pulizer Prize for it.

Thomas was killed by a mob before the trials. Shepherd was shot to death by Lake County Sheriff Willis McCall while being transported to a court hearing. Greenlee, a juvenile, was sentenced to life in prison, the maximum a juvenile could get. Irvin was sentenced to death, though Gov. Leroy Collins later commuted his sentence to life. Greenlee and Irvin got out of prison in the 1960s. Irvin died in 1969, Greenlee in 2012.

“The Groveland Four were denied their voices 70 years ago because of a shameful criminal justice system that existed in Florida and throughout the Jim Crow South,” King said. “We are a better state and a better country today, because collectively we no longer tolerate gross perversions of justice like this,” King said.

DeSantis’ read: “For seventy years, these four men have had their history wrongly written for crimes they did not commit. As I have said before, while that is a long time to wait, it is never too late to do the right thing. I believe the rule of law is society’s sacred bond. When it is trampled, we all suffer. For the Groveland Four, the truth was buried. The Perpetrators celebrated. But justice has cried out from that day until this. I would like to thank CFO Patronis, Attorney General Moody and Agriculture Commissioner Fried for their support.”

Fried’s read: “Today’s action marks progress and resolution on an undeniable injustice of the past — I’m proud of my colleagues and thankful for everyone who has worked so hard to help correct this disgrace. And although the action taken today can never fully revise this dark chapter of Florida’s past, it’s my hope that the families of Charles Greenlee, Earnest Thomas, Samuel Shepherd and Walter Irvin can accept this pardon as a sincere attempt to set the record of history straight. I look forward to working with the Clemency Board and the FDLE to ensure a full proclamation of exoneration is obtained to clear the names of each of the Groveland Four.”

Cheers and praise poured in toward the Cabinet afterwards.

“Today is a day that many in our community thought would never come,” Glenton Gilzean Jr., president of the Central Florida Urban League, said in a written statement. “On behalf of the Central Florida Urban League and our community, we are thankful that Gov. Ron DeSantis, Attorney General Ashley Moody, Chief Financial Officer Jimmy Patronis and Commissioner of Agriculture Nikki Fried came together to right this tremendous wrong. To the families of Earnest Thomas, Charles Greenlee, Samuel Shepherd and Walter Irvin, after 70 years, the reputations of your loved ones have been restored. May they finally rest in peace.”

“Today’s news is bittersweet,” declared state Rep. Geraldine Thompson, who has been crusading for the Groveland Four pardons since 2014, and testified Friday. “While we can’t reverse or erase the pain inflicted upon these four young, innocent men and their families, we can ensure that this state continues to move in the right direction by taking a hard look at the justice that is systematically denied and delayed every day to minority and low-income people. I hope today’s pardon is the first of many actions Gov. DeSantis will take to ensure that injustices like this never happen again.”

“I want to thank the Governor and the Cabinet for their swift action today in correcting the historic injustices suffered by the Groveland Four and finally bringing a measure of closure to their families. As Governor DeSantis stated, there can be no doubt that the criminal justice system failed these men. Every Floridian should have the utmost confidence in our elected leaders to protect their civil rights and these pardons reaffirm our commitment to equality under the law for every citizen,” stated Senate Democratic Leader DesignateGary Farmer, who sponsored the 2017 resolution that the Florida Legislaturepassed unanimously apologizing for the Groveland Four case and calling on the pardons the Cabinet approved Friday.

“For almost seventy years, the treatment of the Groveland Four has stood as a stain on the collective soul of our state. Today, we closed the book on a period of racial injustice and discrimination that will allow us to continue to heal the wounds of the actions of past generations. The Governor and the Cabinet should be commended for their principled commitment to righting the wrongs of previous generations and I hope the families of Charles Greenlee, Walter Irvin, Samuel Shepherd, and Earnest Thomas may finally find the comfort they deserve,” declared state Rep. Bobby DuBose, who sponsored the house version of the 2017 resolution.

Jim Rosica of the Florida Politics staff contibuted to this story.

previousWhy isn't Rick Scott being held to the same standard as Alexandria Ocasio-Cortez?