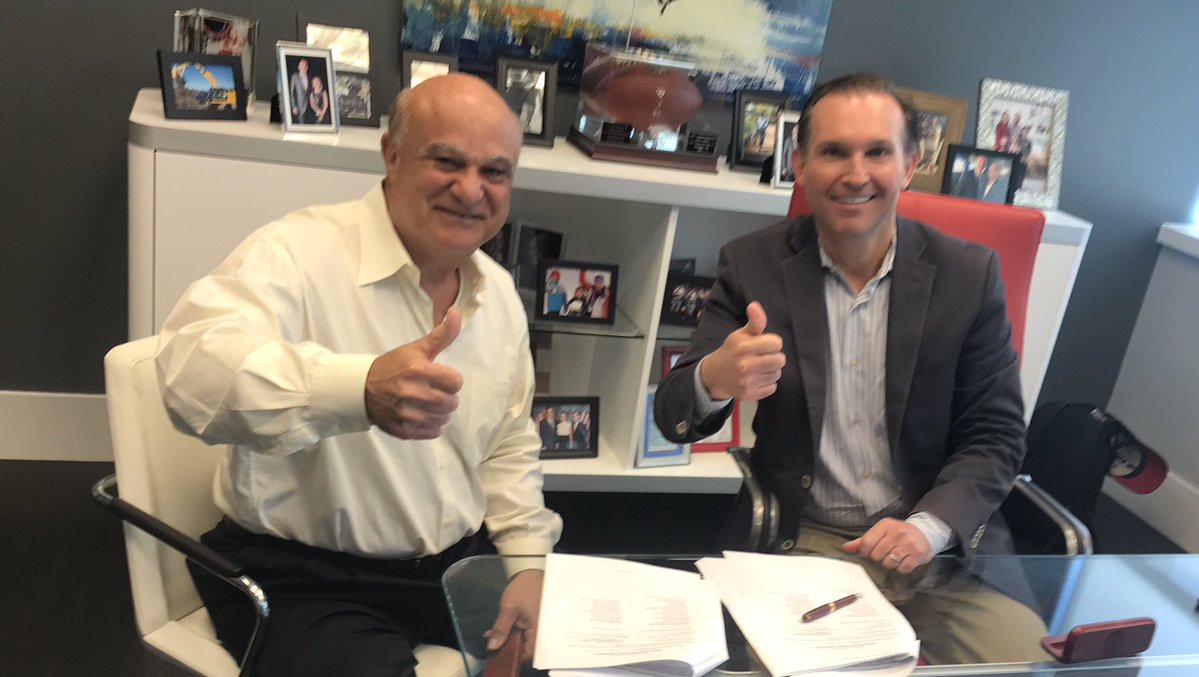 "...Jacksonville can consider an alternate path forward for the location of the Landing,"

Jacksonville Mayor Lenny Curry, buoyed by a second poll in a week to show him with a 35-point lead in his re-election bid, healed a rift with a political enemy Wednesday.

And $18 million of city money will offer the salve.

Pictured: Toney Sleiman, the developer of the Jacksonville Landing.

Sleiman and the city agreed in principle to a deal in which, for $15 million, the developer would surrender rights to the property and terminate the lease. The city would be on the hook for demolition of buildings and tenant relocation costs totaling $3 million more.

But that’s a small price for the end of a project that outlived its initial promise.

The Landing, a riverfront shopping plaza built amid worries that Downtown was dying in the 1980s, bloomed for a short while before protracted decay.

When The Jacksonville Landing was in its heyday, during the Reagan-Bush era, it was a genuine destination.

It had stores you didn’t see in the other malls in Jacksonville, such as Sharper Image (with its then-state-of-the-art videophones) and Banana Republic. People drove there from far-flung Mandarin, as well as Orange Park and the Regency area, to see the new and the now, the latest and greatest, the mall on the river.

The Jacksonville Landing seemed, to those thinking about the issue at the time, as a way to reverse, perhaps, the red tide of retail streaming out of Downtown throughout the Jake Godbold era, those grand department stores never to be seen again in the urban core.

But such did not happen. And attempts to revive the Landing have dominated civic discourse for decades, with the politically connected Sleiman generally on the right side of City Hall.

But not, until now, this one.

Sleiman and Curry feuded since the 2015 campaign when Curry accused Sleiman of making a deal with then-Mayor Alvin Brown: city incentives in exchange for an endorsement.

“Throwing money, nearly $12 million, at special interests while kids are being gunned down in the street because of fewer cops is not simply outrageous it’s disgusting,” said Brian Hughes on behalf of the campaign.

The incentives never came to pass. Curry moved into City Hall, and a protracted period of saber-rattling and serial litigation ensued, including a move to evict Sleiman’s group from the Landing.

Now, with Curry walloping two Republican opponents, one NPA, and two write-ins in two credible polls, it seems Sleiman wants to get on the good foot with the Mayor.

And the word eviction becomes relocation.

“For years, Jacksonville Landing Investments and Sleiman Enterprises have contributed immeasurably to development and job creation in and around Jacksonville,” said Mayor Lenny Curry.

“The Landing has been a fixture in the community much like the Sleiman organization, who stepped in at a time when the property’s future was in doubt upon the exit of the original developer. On behalf of the citizens of Jacksonville, I appreciate their willingness to work with me so that Jacksonville can consider an alternate path forward for the location of the Landing,” Curry added.

“Mayor Curry is having success in Jacksonville and in downtown,” said Toney Sleiman on behalf of Jacksonville Landing Investments. “The JLI team and the entire Sleiman organization want to see that success continue and we are ready to see this process come to a mutually agreed conclusion.”

Sleiman’s support will only help to accentuate what is a stark resource disparity.

Between hard money and Curry’s political committee, the re-election campaign has nearly $2.5 million on hand.

While Brosche’s “New Day” political committee will have spent nearly $265,000 on television by the end of February, the FRSCC will have invoiced $646,660 by Feb. 25 on Curry’s behalf.

The ingredients are there for undecided voters to break for a known commodity over an intraparty challenger who Curry defined for large swathes of voters before she even established an ad buy.

And Toney Sleiman does not want to be sidelined for that second term.