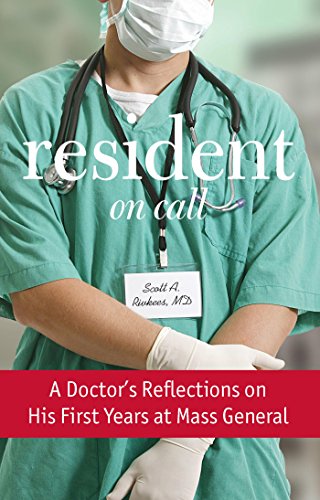 Hospital trysts. Drug abuse. Public exposure. It's all in the book.

Before being tapped as Florida’s surgeon general, Dr. Scott Rivkees documented the sex lives and drug habits of co-workers in a lurid tell-all book.

“Resident On Call: A Doctor’s Reflections on His First Years at Mass General” may never have become a bestseller. But it remains available on Amazon.com. The book came out in 2014, five years before Gov. Ron DeSantis announced Rivkees as his choice for Florida’s top medical officer.

The tome tells a series of anecdotes from Rivkees’ early years as a resident at Massachusetts General Hospital. The most shocking stories involve his colleagues, not Rivkees himself. But included in the tales are stories of break-room sex, drug abuse and a long list of “Cathys,” the women moving in and out of the physician’s life.

The book comes under scrutiny following similar fresh attention on sexual harassment allegations and his claims of being a Nobel speaker. While DeSantis’ office says RIvkees was vetted, he didn’t fill out an application before his selection. But since the Florida Senate refuses to consider Rivkees’ appointment this year, there’s plenty of time for state officials to read the doctor’s work.

Here’s a few choice excerpts from “Resident On Call.”

On sex in the pediatric operating room:

“Pediatric OR3… was home to the night moves of surgical residents, who would sneak in girls from the hospital or girls they met in Boston bars. Trouble would come when the engaged residents were caught in the ORs with women who weren’t their fiancées. Occasionally, housekeeping personnel would catch couples having sex, flipping on the lights to embarrass them after they notified Security.

Perhaps to curb the house officer hanky-panky, there was a strong predilection to select surgical residents who were pious Mormons. Of the fifteen new residents admitted that year, three or four were Mormon. But they got caught engaging in OR sex too.”

On sex at work:

“We each found our unique secret spot for late-night rendezvous. Mine was near the oldest part of the hospital, with walls lined with brown-and-white portraits of the physician leaders and famous scientists of years ago. On the long weekends of call, I would meet a girl from New Jersey who flew in to help make my nights pass more quickly.

Two surgical residents were once discovered around 3:00 a.m. having stand-up sex behind a free-standing poster in a main hospital hallway. The poster was toppled by an inadvertent elbow, leaving them buck naked, scrubs at their feet.”

On the Cathys in Rivkees’ life:

“The girls of Fenway wore a standard uniform of tight blue jeans, long white T-shirts topped with a blue Red Sox jersey, and ponytails sticking out the back of team caps. Some of these girls were the Cathys I courted my first summer in Boston. One Cathy worked at Macy’s, one at the hospital; one was a friend from college, another I met jogging along the Charles. The Cathys recognized that Wags and I chased the Sox and spent our precious free summer days at Fenway. But if a Cathy telephoned before a home stand looking for game company, Wags never asked for a last name, complicating my summer.

Not all the Cathys liked baseball. Some were fonder of the Boston Harbor evening booze cruises on bland fat, white boats where wine and beer were served in small plastic cups that cracked if you laughed too hard. Sitting on the stern of the top deck, one Cathy opened her pocketbook to put on lipstick. All her purse contents spilled out onto the deck below; to her embarrassment, condoms floated down along with the makeup.”

On listening to stories:

“I was at Fenway with a nurse I had met in the EW. Once in an abusive relationship, she talked about the sad things that had happened to her. Episode one: She told me about being thrown downstairs. Episode two: She talked of how her car was once set on fire. Episode three: She described how her ex-boyfriend got her best friend pregnant. Episode four was the story of how he tossed her off a porch. Then my beeper went off.”

On dealing with pediatric deaths:

“Once, tragedy hit one of my patients. A victim of the poor advice given to me by an EW radiologist, a teen fell dead at my feet. I needed to see Sidney. During our meeting he said, ‘You either get past this over the next two days or we’ll have to look into why you can’t.’

Sidney Freedman rounds consisted of us talking about the child deaths, our painful feelings of inadequacy, and our fears of call nights alone. Rather that telling us how to cope, Sidney held a mirror that reflected our ‘whys?’ for us to answer.

On drug thefts in the hospital:

“The number of narcotic pills delivered to the dispensary didn’t match the number that went into the plastic medication cups. New to the floor, we were accused; each of us was questioned, one at a time, by two administrators looking for the drug seeker among us. Three days later one of the floor nurses was nabbed, her locker packed with tablets of codeine and vials of morphine and methadone. But we were the ones accused; we were the ones not trusted.

This was just the start of my encounters with medical narcotics abusers. One of my fellow pediatric residents was caught at the lone hardware store on Beacon Hill trying to copy the EW narcotics cabinet key. The store owner recognized the stamped code on the key and, saying he had to go to the back room to get a different blank, alerted the hospital police. That resident left the program for a month-long detox program.

One surgical resident would order two hundred Percocets for discharge pain management for each of his patients. Saying he was completing the circle of care from admission to discharge, the surgeon would push the nursing staff out of the way, insisting that he alone should give the discharge instructions. ‘After all, I caused the pain, let me fix it,’ he’d say.”

“Working the wards and the EW, we were the hospital’s front line, and we learned the nuances of being hospital public relations officers. Sometimes the public persona of the house officer needed a bit of smoothing. One lesson in public relations started when a pediatric resident muttered, ‘And you can go fuck yourself’ to the mother of a child with a hyphenated last name.”

“I was next to both girls from Maine as I saw Wags walking in our direction. I next heard shouts from the Cardiac Kid’s girlfriend, who was pointing and laughing in disbelief.

‘Ohhhhh, my God! His penis is out!’ she yelled…

Wags, in a hurry to join his girl from Maine, had forgotten to perform the most obvious unconscious act each male does when backing away from a urinal…

Each day in medicine we see what’s normally hidden to lay people: Breasts, penises, and the low-hanging scrotums of aging veterans are daily sights. Care of the nude is a routine business, and the sicker you are, the more modesty fades. But to a girl from Maine, in town to work behind a desk, such a sight in a fine restaurant was no less than bizarre.”

“Dr. Bigelow stood at the end of the bed, asking the young man precise questions that didn’t reveal much. ‘Do you mind if I examine you?’ he asked.

First he examined the head and neck with the deliberation of a stamp collector. Then he inspected the torso, noting freckles in the armpits and dark marks on the back and chest that looked like drops of spilled coffee. But Dr. Bigelow jumped back when the boy dropped his pajama bottoms. Dr. Peacock was smiling and biting his lip, a perfect setup. Front and center was a penis that reached the boy’s knees, the consequence of a growing neurofibroma. Covering the boy back up, Dr. Bigelow said, ‘Thank you. It was a pleasure to meet you.’

Down the hallway, Bigelow and Peacock walked, quietly laughing together. Dr. Bigelow said, ‘I know what he has!’ “