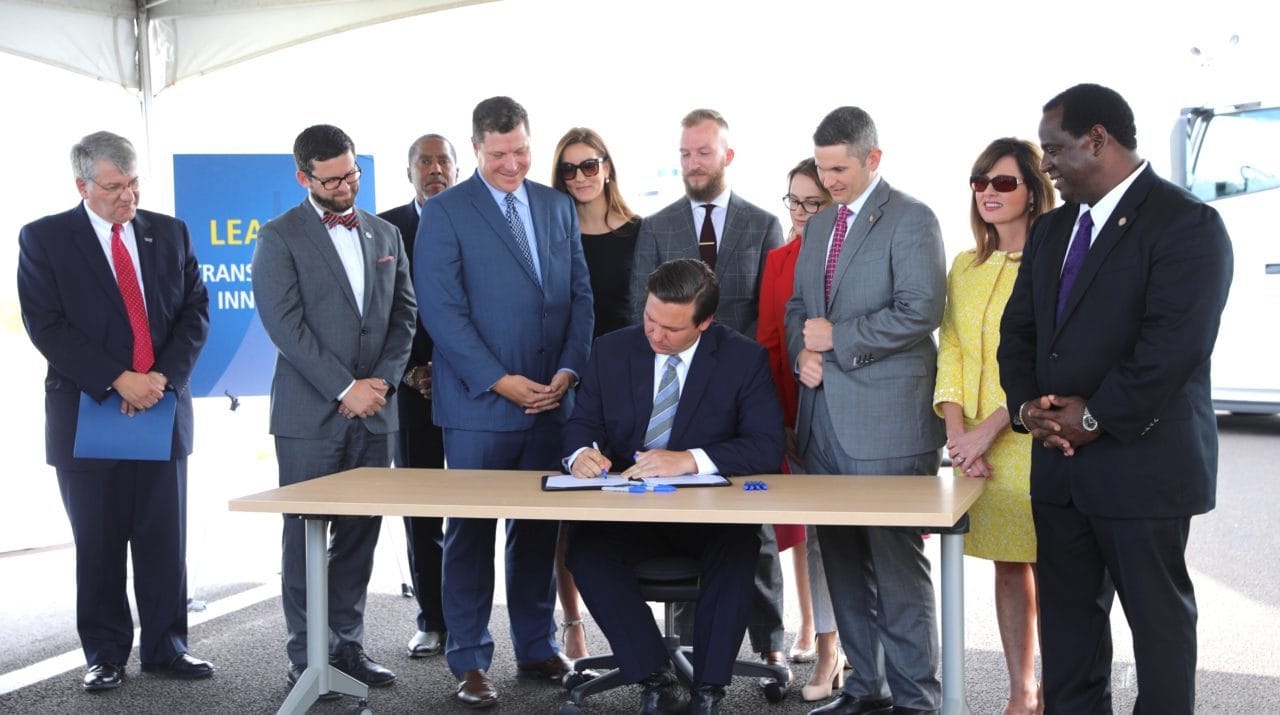 The future of Jacksonville's downtown is going to include autonomous vehicle technology.

The future of Jacksonville’s downtown is going to include autonomous vehicle technology.

To that end, Gov. Ron DeSantis signing HB 311 on Thursday was a boon for the city, asserted the spokesman for the Jacksonville Transportation Authority.

“This bill further advances Florida as a state that welcomes innovators and entrepreneurs, and encourages autonomous vehicle projects such as the Jacksonville Transportation Authority’s Ultimate Urban Circulator,” Cawton said Thursday.

The Ultimate Urban Circulator (U²C) will run down Bay Street, from the Jacksonville Regional Transportation Center (JRTC) to the Sports Complex. Federal grants secured in February from the U.S. Department of Transportation are going to help.

“The JTA is recognized as a national leader in AV deployment, and, with the help of the $12.5 million BUILD Grant from the USDOT, the Authority will begin to implement this technology along the Bay Street Innovation Corridor in the coming years,” Cawton said.

“We believe any measure that encourages innovation and provides easier and greater access to newer and safer technologies, such as autonomous vehicles, is good for our riders, our communities, and our economy. Again, we applaud the Governor and the bill sponsors for this bold step forward in support of transportation innovation in the State of Florida,” Cawton added.

The bill (HB 311) defines autonomous vehicles as any car with hardware and software that make it capable of operating without a driver. The legislation had strong support from major players like Uber, Lyft, Google’s Waymo and General Motors. The Florida Chamber of Commerce also put its lobbying heft behind the bill.

“We here in Florida are pioneering the most exciting innovations in transportation,” said Rep. Jason Fischer, the House sponsor of the legislation.

“This bill on self-driving cars will usher in a new era of smart cities that will not only expand our economy but increase road safety and decrease traffic congestion,” Fischer added.

Fischer, who is politically synced with Jacksonville’s Mayor, has been one piece in a puzzle that could change Jacksonville transportation for the better.

The DOT has come up big for Jacksonville this year. February saw grants for the Bay Street Innovation Corridor: ($12.5 million of an expected $62 million spend) and $12.5 million for the removal of Hart Bridge offramps.

More federal money was rolled out in June when the DOT gave Jacksonville $17.6 million to address train delays.

Per the grant application, “the project makes improvements to three distinct components of the rail system in Northeast Florida.”

Targeted areas: the FEC corridor between its Bowden Rail Yard (northern most rail yard for the system) and the St. Johns River rail bridge; the Beaver Street interlocking; the southern end of the CSX rail yard just north of downtown Jacksonville.

The hopes are that this alleviates choke points, including in San Marco where the “San Marco Train” delays are legend. A 7,000 foot staging track is expected to help with that.

Rail switches and connective track will be modernized. Additionally, upgraded signals and tracks will be placed at the CSX/FEC Beaver Street Interlocking. And expect Centralized Traffic Control (CTC) improvements on over 5.35 miles of FEC track and at all road crossings.

“All freight that comes in and out of Florida needs to cross through Downtown Jacksonville. The project works to alleviate a single point of congestion for freight movement, thus allowing for increased productivity and modern controls to improve safety,” the grant application asserts.

“The relief of this chokepoint is greatly needed, since it occurs in the middle of a medical district that includes a trauma center for Baptist Medical Hospital, Baptist MD Anderson Cancer Center, Wolfson Children’s Hospital and Nemours Children’s Hospital.”

Indeed, the application contends that some delays can be up to three hours.

Jacksonville has been uniquely positioned to connect with the Department of Transportation.

And JTA CEO Nat Ford is very skilled at interfacing with state and federal government for priorities.

Add to that Mayor Lenny Curry backing the President from the Florida primary onward.

In February, Chao lauded the “vision” and the “partnership between the state, the city, and Jacksonville Transportation Authority.”

“We on the federal level love to see a community that’s united, with a vision for the future,” Chao added.

That vision for the future is paying off in terms of federal largesse in the present.

nextTampa businessman Mike Griffin appointed to USF Board of Trustees