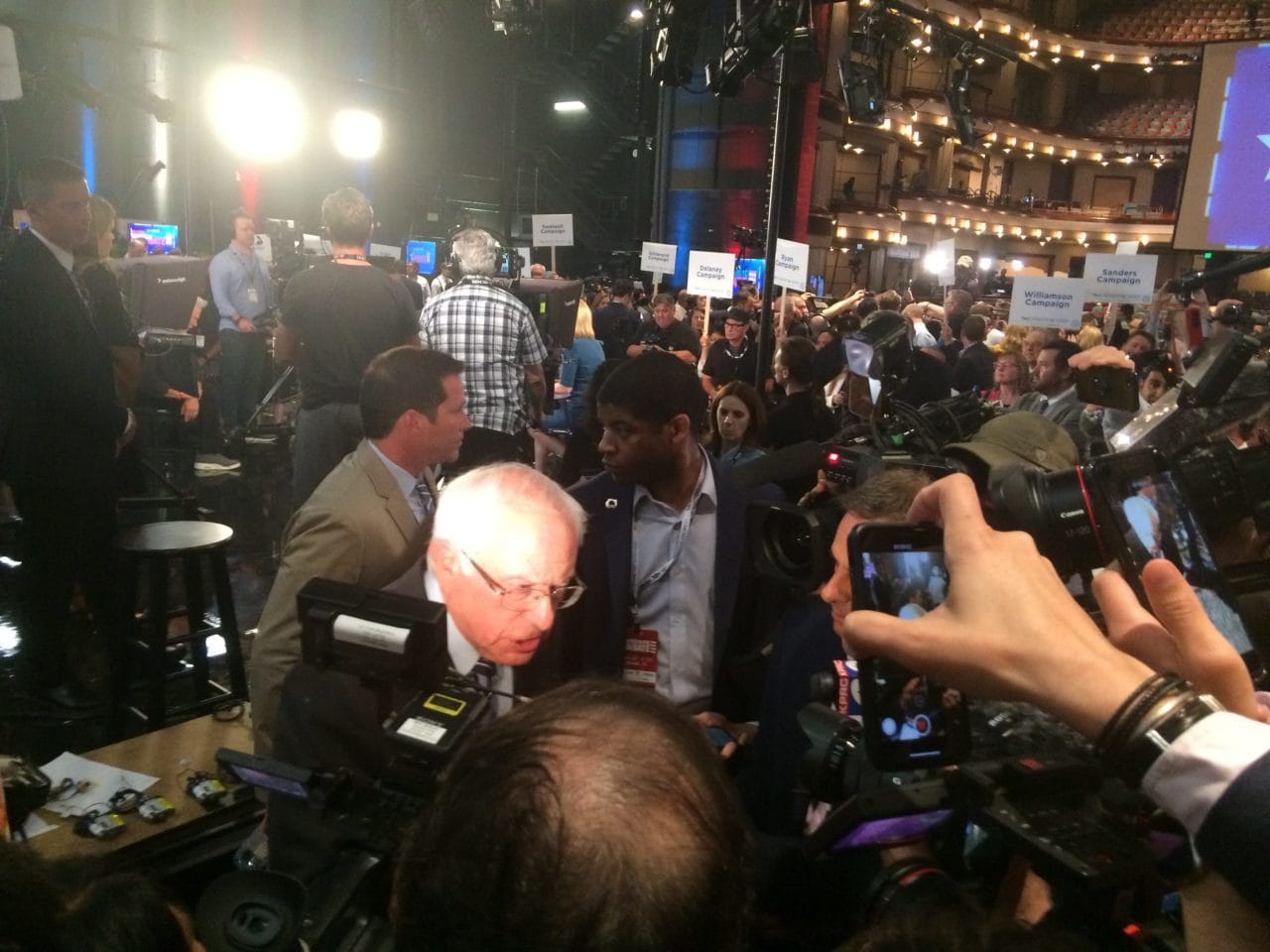 "I would like to hear him acknowledge what was wrong. "

As Democrats took the stage in Miami for night two of their first primary debate, the standout moment had to be Kamala Harris challenging former Vice President Joe Biden over his decades-old opposition to federally mandated busing of minority students.

Harris, who represents California in the U.S. Senate, directly and bluntly challenged Biden on his stance. That interaction reverberated into the spin room, where Harris was asked about the exchange in an interview with MSNBC’s Chris Matthews.

“I would like to hear him acknowledge what was wrong about a perspective on busing that was a perspective that I believe he had at that time,” Harris said.

She also pushed back on Biden’s recent remarks about his work with segregationist U.S. Senators. Biden represented Delaware in the Senate from 1973 to 2009.

Biden cited his work with those Senators as a sign that civility is possible, regardless of an individual’s beliefs. But Harris also confronted him over using those Senators as an example. She reiterated her criticism to Matthews.

“I otherwise have a great deal of respect for Joe Biden,” Harris said. “I do not believe he’s a racist. But his perspective on those Senators was something that was hurtful and it had consequences.”

Biden was among a handful of candidates who didn’t appear in the spin room late Thursday.

He also referenced his tenure as Superintendent of the Denver public school system.

“I know what the history of busing looks like in that community,” Bennet said. “And I know how important it is that that work be supported by the federal government, not just have it be a matter of choice at the local level.”

He reiterated that Biden was wrong on the issue.

U.S. Sen. Bernie Sanders of Vermont was asked whether he believes he stood out amid the various quarrels between candidates, including that of Harris and Biden.

“Well, that’s for people to decide,” Sanders said. “I’m not a great fan of 45-second responses dealing with the huge issues facing this country.”

During his time in the spin room, Sanders worked to expand on the overall message of his campaign: “You don’t talk about this in (the) media, and we don’t talk about it in Congress: Why doesn’t change happen?”

Sanders placed blame at the feet of big entities such as Wall Street, and the pharmaceutical and insurance industries. He argued that making significant policy changes, such as eliminating private insurance and making college free, won’t be easy.

“I will tell you that nobody there, including me, can do it alone,” he said. “We’re going to need millions of people to stand up and finally say to those people, ‘You will no longer continue running this country. We’re going to have a government that represents all of us, not just big-money interests.’ “

Sanders also was asked whether he could win Florida when Andrew Gillum, a candidate Sanders backed, couldn’t. The Senator seemed confident but said it will take work.

“I do believe we can. But everything depends upon growing the voter turnout. It means bringing young people and working people into the political process in a way that we have never seen.”

Sanders was challenged on stage by more moderate Democrats such as Bennet and former Colorado Gov. John Hickenlooper.

Both reiterated those criticisms following the debate. Bennet said Sanders’ push to eliminate private health insurance, a proposal backed by Harris as well, would not go over well in a general election.

Asked whether he worries he’s giving Republicans ammo for the general election by attacking Democrats for embracing socialism, Hickenlooper demurred.

“I just think Democrats have to be very clear and say that we are not socialists,” he said.

Elsewhere, U.S. Sen. Kirsten Gillibrand of New York repeated her push to protect abortion rights, which was a focal point of her time on stage.

When asked whether that would extend to partial-birth abortions, Gillibrand said she would not support a ban.

“The decision-making for reproductive rights should always rest in the hands of women,” Gillibrand said.

U.S. Rep. Eric Swalwell, who sparred with South Bend Mayor Pete Buttigieg over the Mayor’s handling of a recent police-involved shooting, built on those critiques post-debate.

“If someone died and the policy of body cameras was not followed, I would make accountable the chief executive of the police department,” Swalwell argued. “That’s his job as Mayor, and we want to know what he would do as President if a policy wasn’t followed and someone was hurt because of it.

“And I think that’s a legitimate question about leadership.”

And Andrew Yang, who didn’t earn a ton of speaking time on stage Thursday night, said he was nevertheless grateful for the opportunity.

“Millions of Americans found out about me and the campaign tonight,” Yang said.