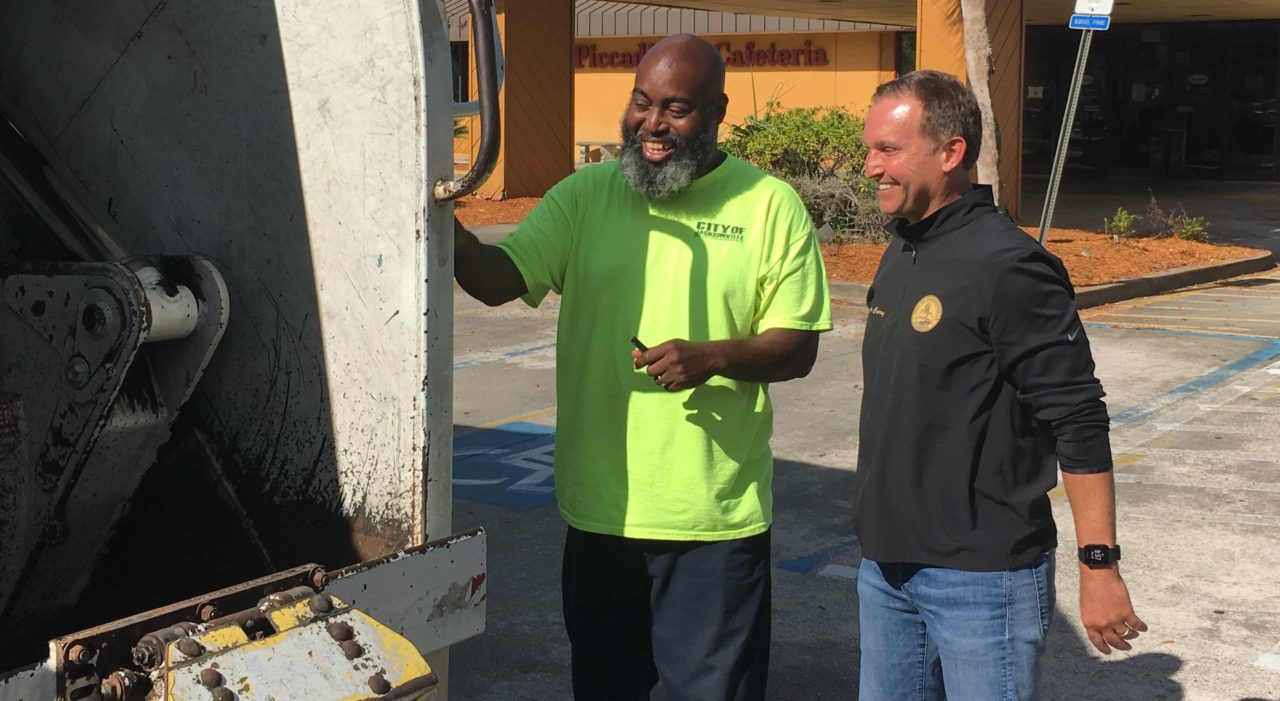 As we reported Monday, a St. Pete Polls survey of Jacksonville voters showed Mayor Lenny Curry (and some of his key priorities) were underwater.

That was still better than one of his key issues: JEA privatization, which is at -55  (15 percent approval, 70 percent disapproval).

Add to that various narrative glitches:

— Dysfunction at the top of the Kids Hope Alliance.

— The optics of former administrator Sam Mousa heading to help the Jaguars in the gargantuan Lot J development deal.

— Some observers contending that a “bunker mentality” may be setting in at City Hall.

Curry, however, isn’t worried about polls, he told us Thursday morning.

“I haven’t seen the poll. I’ve certainly heard folks talking about the numbers,” the Mayor said.

“If those numbers are accurate, they’re certainly an outlier, not what I experience when I’m out in neighborhoods every single day, when people come up to me to talk about the initiatives we’re pursuing.

“I’m going to keep doing what we campaigned on: Working for Jacksonville,” Curry added.

Curry, whose political operation itself often polls, refuted speculation that he has a survey currently in the field: “Not me, not my team.”

That survey includes questions about the Florida Times-Union, the local daily with which the Mayor has had a fractious relationship.

“I couldn’t care less,” Curry said about the city’s paper of record.

Curry defended the idea of Mousa working on the Lot J development project, one that will see over $200 million in city incentives.

“There’s nobody that knows every square inch of Jacksonville, the infrastructure, like Mousa,” Curry said. “His skillset with infrastructure and as an engineer is unparalleled. His record speaks for itself.”

The Mayor also contextualized recent goings-on at the Kids Hope Alliance, which included the city’s chief administrator suspending the CEO of a purportedly independent agency.

“The Inspector General notified us that day, the day the administrative leave happened, that they were conducting an investigation. That’s all we know.

“There were discussions with senior members of my team about appropriate action and the Inspector General,” Curry said, leading up to the decision to put embattled Joe Peppers on “administrative leave.”

“The city acted in the best interest of Kids Hope Alliance and the city of Jacksonville.”

Regarding JEA privatization, Curry did not see the board decision to explore privatization as a foregone conclusion.

“I don’t know if they get to that,” Curry said. “If you look at what they’re doing, they’re doing what I suggested should have been done a couple of years ago, what the market will bear,” and whether a transaction should be pursued.

“The citizens of Jacksonville have the final say. Nothing happens without [their vote].”

Curry noted that the sale could make Jacksonville “debt-free,” but he’s not looking for a “spending spree” if the target of $3 billion can be achieved for a sale.

Finally, Curry addressed the potential for a 2019 vote for a school capital tax referendum.

Despite a Jacksonville City Council committee voting to move the bill to put it on the ballot this year, and rumors of meetings between charter and school board advocates, the Mayor still isn’t sold.

“I laid out what I was looking for,” Curry said, “one or two months ago. I have not had communication with them in a very long time. I am not aware of any deal that they’re brokering and negotiating.”

“Timeline” issues concern Curry, who is not ruling out a veto should the bill clear Council next Tuesday: “If the bill lands on my desk, I’ll assess it.”

Curry talked to us ahead of an event showcasing contaminated recycling, which costs the city over $500,000 a year. It is the administration’s desire to remind people how recycling works, with recycling mistakes by consumers driving up costs and affecting workflow for processors.

Spokeswoman Nikki Kimbleton noted that despite these issues, the recycling program is performing better financially than in recent years.