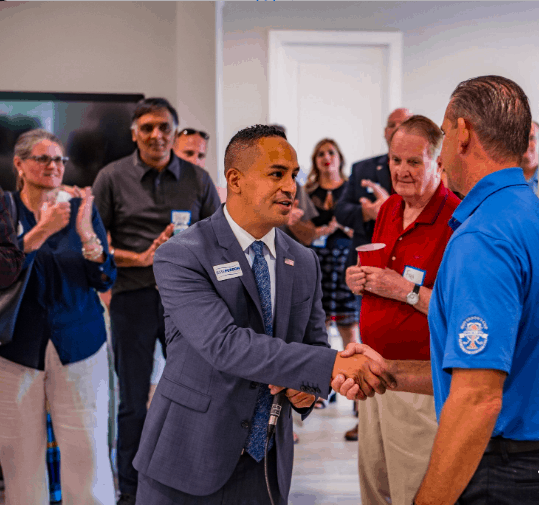 A Bonita Springs candidate for state House was involved in a crash that left one woman potentially fatally injured.

The Florida Highway Patrol said the wreck occurred after Ana Maria Arce Valdes was stopped on the overpass over Alico Road. Her Lincoln Town Car had its flashers on and was behind a disabled Versa driven by Yadira Sanchez. A Jeep Wrangler driven by Purdon then struck the Lincoln, which hit the Versa, as first reported by the News-Press.

All three vehicles were headed south on Interstate-75.

Purdon was leaving a Young Republicans event at Bell Tower Shops, according to a Republican source.

An initial FHP report said the crash is not alcohol-related. It also said both Valdes’ Lincoln and Sanchez’s Versa caught fire in the crash.

Witnesses say one of the women suffered severe burns in the crash.

Valdes was transported to Lee Memorial Hospital in critical condition, the newspaper reports. Authorities confirm she is still alive, but unlikely to recover.

Purdon was uninjured and suffered only a couple bumps and bruises, along with a couple burns. Patrolman ticketed Purdon for rear-ending the Lincoln, which had its blinkers on.

He said in a statement, “You may have seen or heard that I was in a bad accident on 75 last night. Thank you for your calls and support. Join me in sending prayers for everyone involved.”

The same interstate exit was also the site of a fatal car crash involving a former candidate in the same House race.

Peter Cuderman on Dec. 30 was in a crash that left Matthew Paul Clark dead. Cuderman had raised more than $20,000 toward the race but dropped out in April.

That crash happened on the ramp from Alico Road onto Interstate-75. Clark had gotten out of a parked pickup truck pulling a trailer, according to FHP. Cuderman’s vehicle struck a trailer, which then swung into Clark.