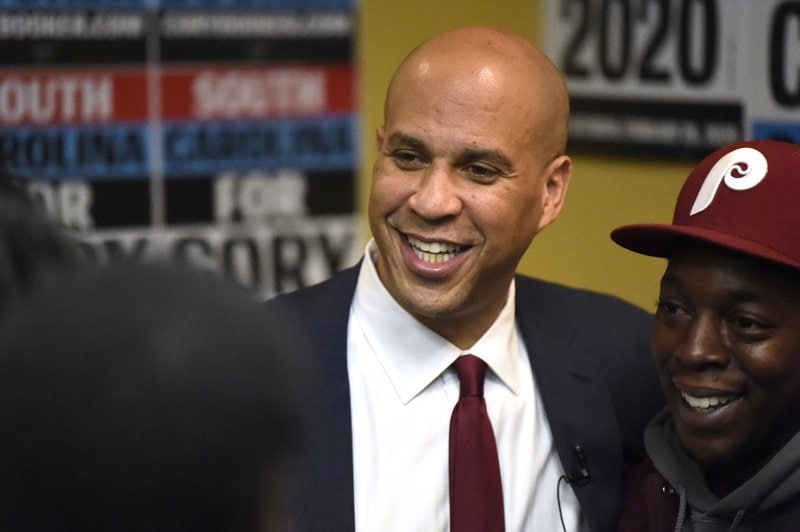 The news of Kamala Harris’ sudden departure from the presidential race came during an all-staff conference call led from Cory Booker’s campaign headquarters in Newark, the New Jersey city that he led for seven years and that propelled him to national fame. Within hours, Booker dictated a message calling Harris “my friend and my sister,” and a directive was issued to show her team respect at a difficult moment.

The campaign also scheduled a high-profile speech in Iowa.

Booker’s aides have been careful to emphasize that the New Jersey Senator isn’t looking to capitalize on the collapse of his Senate colleague’s White House bid. But they’re also aware that for a campaign languishing in the polls, this may be one of their last opportunities to turn things around.

“We have all the kindling on the fire. All it takes is one match, and I think we will take off,” Booker campaign manager Addisu Demissie said in an interview with The Associated Press.

They hope that Thursday’s speech in Des Moines, Iowa’s capital city, could be the spark. With less than two months before the Iowa caucuses open the Democratic contest, Booker plans to talk about what Harris’ departure means for the party. He’s also expected to argue that he’s best positioned to take on President Donald Trump because he can rebuild the multiracial coalition that twice elected Barack Obama, a theme Harris hit last month during what would be her final debate performance.

Booker, who is black, will likely critique the dwindling diversity of the Democratic field. On Wednesday, he blasted a process that led to a field with “more billionaires … than black people.”

It’s a last-ditch attempt by a candidate who has struggled to gain traction — and could face pressure to leave the race if he doesn’t qualify for the next debate this month. Even some of his supporters, such as Iowa state Rep. Jennifer Konfrst, are skeptical about whether he can make it, with just eight days remaining until the qualification window closes.

“The polling threshold is tough,” she said.

The most recent Des Moines Register/CNN poll of likely Iowa caucusgoers, conducted in mid-November, showed Booker with just 3% support, around where he’s been throughout his campaign.

Carol Fowler, a veteran South Carolina Democratic activist, said that Booker recently received a warm reception during an event she hosted for him at her home — but that missing the debate would be dire for his campaign.

“I think any of them, at this point, who don’t get in the debate, it’s hard for them to make a case for themselves for why they should stay in,” she said. “And I think if they don’t make the debate, they won’t be able to raise money to keep going.”

This wasn’t supposed to be Booker’s conundrum. As Newark’s Mayor, he garnered headlines for shoveling snow and saving a woman from a house fire. His narrative as an Ivy League-educated Rhodes scholar with a compelling personal background and rhetorical skills compared to those of Obama only solidified his status as a Democratic rising star.

But if moving to the Senate was intended to bolster Booker’s credentials for an eventual presidential campaign, that hasn’t panned out. Pete Buttigieg, another mayor educated at top universities who also earned a Rhodes scholarship, has instead emerged as the fresh face in the race.

Booker’s also faced challenges raising money during the campaign, posting a middle-of-the-pack $6 million haul in the third quarter after making a last-minute fundraising plea in which he warned supporters he’d have to raise nearly $2 million or drop out of the race. Those fundraising struggles mean Booker hasn’t been able to run paid advertising until this past weekend, when he launched a six-figure digital and radio ad buy.

Within his campaign, there’s an awareness that they’re entering a do-or-die phase. One person said Booker staffers have made it known in recent weeks that they’re considering their next steps in case Booker’s campaign ends soon.

Booker is among several candidates who have quietly begun to reach out to Harris’ donors after her departure, according to a donor with direct knowledge of the outreach. The New York-based donor, who has worked with Booker in the past and had ties to the Harris campaign, reports early signs that Harris’ financial backers in the New York area are more inclined to move toward Joe Biden or Buttigieg. There is a concern, the donor said, that Booker’s consistent message of hope and unity simply doesn’t match the mood of the Democratic primary electorate or Democratic donors, who want a nominee who can take the fight to Trump.

The donor and person familiar with the staffing considerations spoke on condition of anonymity to discuss private conversations.

Demissie said Booker has enough cash to keep his campaign afloat until the caucuses, but warned that “if we want to keep growing our campaign, the answer is no, we need to be robustly funded headed into February.”

He also dismissed critiques of Booker’s message and said that if the senator received as much media attention as some of the top-tier contenders do, he’d be just as competitive.

“Our challenge has always been how do you grab that attention,” Demissie said.

But for some Booker supporters, it’s time for him to be more aggressive. Steve Phillips, a major Democratic donor and longtime Booker friend who ran a recently shuttered super PAC for the candidate, said the main challenge is convincing voters in the early states that Booker can beat Trump. Booker is facing skepticism, Phillips said, in part because he’s black.

“He does need to more explicitly tackle the elephant in the room, which is this electability argument,” he said.

Phillips, who is African American, said that Buttigieg is “subliminally, at least, tied to the picture of the candidate that voters would want.” He suggested that was behind some of Booker’s fundraising struggles — and that the candidate needs to confront those beliefs head-on.

To that effect, another pro-Booker super PAC unaffiliated with Phillips recently began airing a television ad in Iowa directly contrasting Booker’s experience with what they framed as Buttigieg’s lack thereof.

Philip Swibinski, a spokesman for the super PAC United We Win, said that the group sees an opening for Booker among moderates and that the organization has plans to launch ads focused on African American voters in South Carolina as well. The super PAC will hold onto some cash, however, so it can continue to support Booker beyond the debate qualification deadline.

Regardless of what happens in the coming days, Booker’s top aides said they still expect him to be in the race on Feb. 3, when Iowans make their choices at the first-in-the-nation caucuses.