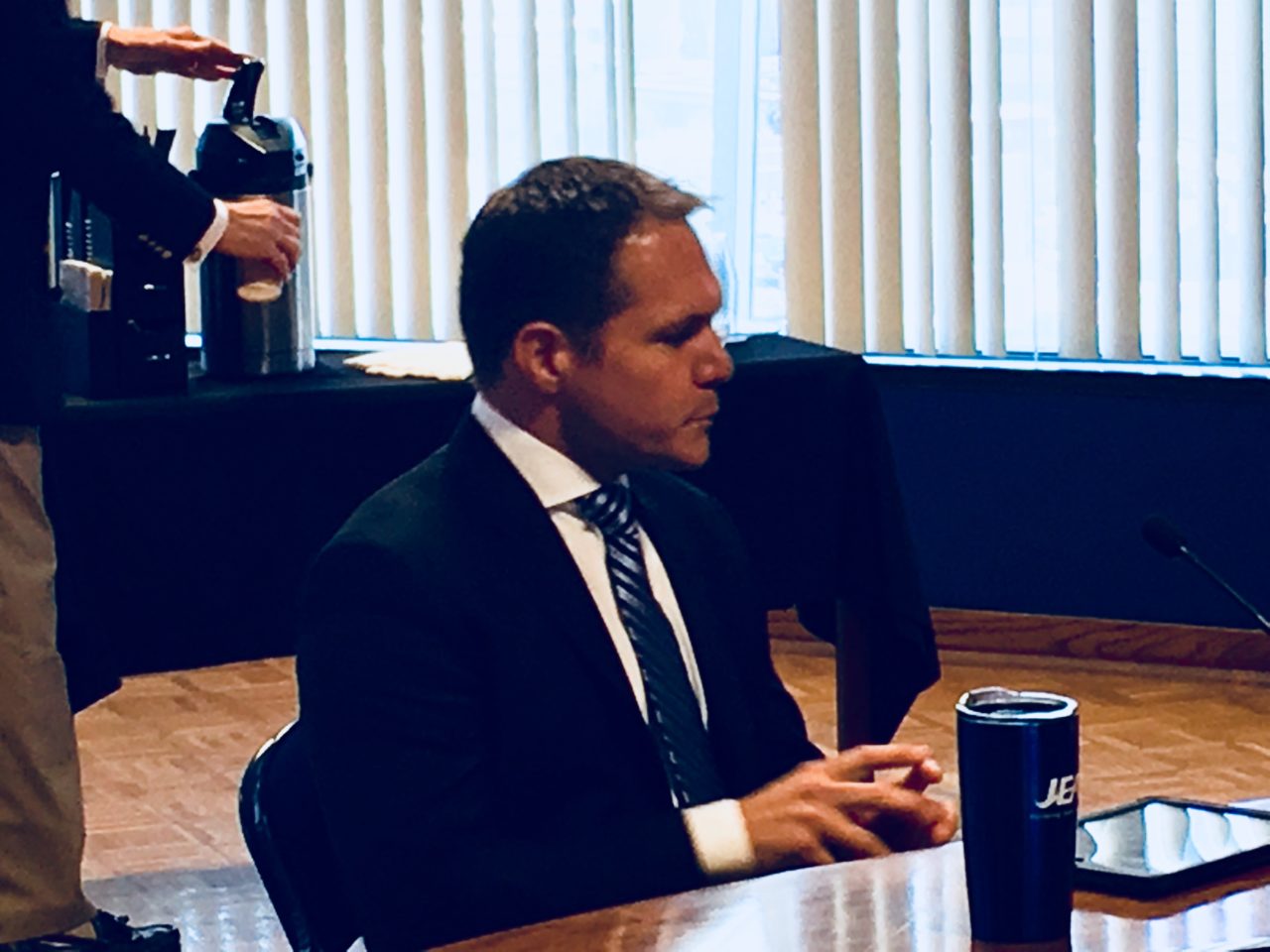 At issue: a controversial performance pay plan that would have allowed people with the money to do so opportunities to buy shares of the public utility and profit personally off the sale.

There were no caps on potential value, and the people best positioned to buy the shares were the well-compensated denizens of the C-Suite.

A context of distrust had already existed: a push to sell the utility, and a unilateral decision by the utility to negotiate with bidders in Atlanta, rather than Jacksonville. And calls for the removal of CEO Aaron Zahn, calls for a grand jury investigation, and a delayed-but-not-dead City Council resolution to stop the sale process altogether.

The hearing, held in a drab and dimly lit standing room only conference room, illustrated in some sense the Lenny Curry machine attacking itself.

Curry has argued in favor of privatization of the utility over the last couple of years, a position that doesn’t poll well when the question is posed to the public. Zahn donated to Curry’s reelection campaign.

However, the two Councilmen who called the meeting (Republicans Rory Diamond and Ron Salem) also are Curry allies, sharing political consultants with the Mayor.

Curry, for his part, said he would “support any action” the JEA Board took regarding Zahn, including firing him.

Multiple Council members shared the sentiment before the meeting.

President Scott Wilson said it was “probably time” for Zahn to go. Former President Aaron Bowman said “the captain goes down with the ship.”

However, the question looming at the end of the four-hour meeting was whether Zahn had done enough to get the benefit of the doubt.

In the end, Diamond called for the resignation of JEA’s CEO and CFO, maligning “legal theft.”

Councilman Salem likewise said the “overwhelming blame” should go to executives for bamboozling the board into accepting a plan that was not fleshed out.

Mea culpa: Zahn showed up promptly at 1 p.m., and offered a brief opening statement, in which he took responsibility for the plan but did not resign.

“I made an error in judgment. The motives of the Long-term Employee Plan at inception were pure but the moment JEA’s Board contemplated recapitalization, I should have recommended that a Long-Term Performance Plan would be better timed after a final decision was made on JEA’s future,” he said.

Zahn did not resign but is “sorry for anything I have done to cause a lack of trust in my team or me.”

Underpaid?: The questions, driven by Councilman Diamond, probed the evolution of the performance unit plan.

Zahn could not recall when the first statement was made about the so-called “PUP plan,” proposed at a “targeted” annual cost of $3.4 million a year. Neither could JEA CFO Ryan Wannamacher.

Diamond countered that “zero calculations” had been provided, and Salem wondered if calculations on a whiteboard or legal pad had been made internally.

Zahn, who had never run a public utility of any size prior to the rise to the pinnacle of the eighth largest in the country, illustrated the need for a plan with a personal anecdote.

He noted that his pay was “well below market” compensation, but he would not commit to saying he was “underpaid.”

“At some point, PUP was chosen,” an exasperated Diamond asked. Zahn attributed the idea to consultants at Willis Towers Watson.

Whose idea?: Councilman Salem asked if Zahn put the plan on the July 23 agenda, and the CEO disclaimed ultimate responsibility, saying the whole “senior leadership team” was involved.

“Board members got the packet late Friday and were not briefed,” Salem asserted, adding that it was pretty much “the last item on the agenda.”

“Board members didn’t have any feel for the cost of this plan … they were not briefed,” Salem said. “No figures, for this specific plan.”

“Many of them angry about it to this day,” Salem added.

Salem read the minutes, which said Zahn had “complete discretion” to change the plan. However, Zahn said that “while the minutes may reflect that,” plan administration was a delegated authority.

“A lot of times we do resolutions and copy and paste language … the board asks that the CEO do this,” Zahn said, again attributing the performance scheme and the sale push existing at the same time as an “error in judgment.”

As a CEO, he should have “pulled back … made a recommendation that it not be approved,” he said.

Payoffs for execs?: Zahn could not name another public utility with a similar scheme. Salem said the proposal, with $10 shares, was “simply a plan for the higher-paid people.”

“That’s absolutely incorrect,” Zahn said, “while there may be a document that says that.”

Provisions to buy “floating” units of the scheme, abandoned by involuntarily terminated employees, were also considered.

Board member Kelly Flanagan, CFO for the Jacksonville Jaguars, said she believed the plan was to cost $3.4 million.

“No one at that board meeting or staff discussed the value of recapitalization for the PUP,” Diamond noted.

“At the time, we had no idea if recapitalization would move forward,” Zahn added, even as invitations to negotiate were approved at the same board meeting as the performance scheme.

“The formula is spitting out numbers much larger than anticipated,” Salem read from an internal August email about the value of the PUP.

CFO Wannemacher said he had responded to that email, but if such existed, it was not provided in public records given to Council.

“I have a running list of about 38 missing documents,” Diamond said.

Council President Wilson asked the documents be provided to the Council’s lawyer also.

Diamond continued to press, noting that under optimal conditions, $1.6 billion of the sale price could have gone to employees who’d had the foresight and capital to buy $10 shares.

Questions to Wannamacher and others about whether documents had been provided to the City Council Auditor regarding details of the scheme were not answered conclusively.

As late as November, JEA claimed it was a “draft plan,” even though it was passed in July.

The justification as that “legal work” was still be done.

Zahn played coy when asked about emails that referred to Michael Munz and Melissa Stone, two high-powered consultants, each of which has been contracted to help with JEA’s external messaging needs.

Was it legal?: JEA VP and Chief Legal Officer Lynne Rhode asserted meanwhile that as of Sept. 13, the plan had been “fully vetted” by lawyers, “without a single legal impediment.” However, a memo from General Counsel Jason Gabriel said that wasn’t the case.

Gabriel, in testimony, said the plan was JEAs, not OGCs.

“It was conceptual … presented as an employee incentive plan,” the city lawyer said, noting concerns about “outstanding issues” expressed as the plan developed.

“There was a bit of an internal debate on the legality of it,” Gabriel said.

Zahn said that he had advised that “if it needed to be killed, let’s kill it.”

However, ultimate last rites for the scheme were deferred.

“It did take me until the 14th to write an email … saying we’re not going to move forward,” Zahn said.

“I’ve owned the mistake and said we should pull it in July,” Zahn added later, saying the delay meant the “optics were terrible.”

Conclusions: Diamond, wrapping up his portion of the program, said he was “trying hard to believe” JEA’s narrative.

“If you look at what’s missing, which is a lot, [it’s clear] that recapitalization is everywhere … over and over … It was baked into the cake every step of the way,” Diamond said.

“The other thing that’s hard to believe is that no one did the math,” the Councilman added, drawing a picture of “instant millionaires, all over Jacksonville.”

Diamond was irked by a lack of cap of profits and the disregard of the City Council Auditor’s Office over the course of months.

“I don’t see crimes here … I see legal theft. A group of executives who know this thing is going to be sold,” Diamond says. “It’s legal. But it’s wrong.”

“I don’t see how a CEO can continue in that job. How a CFO could continue … I have more questions after today than I do answers,” Diamond said, calling for a special committee.

Zahn, for his part, would not resign. The board will have to terminated him

Other Council members, including LeAnna Cumber (whose husband, Husein, a former board member, had called for Zahn to be fired with cause), were “shocked” by the “extreme secrecy” of the performance unit plan scheme.

Purchasers were forbidden from disclosing they had an interest in the plan, per an agreement.

“NDA’s were flying,” Cumber said. “Why does everything need to be kept so secret?”

Randy DeFoor noted that the documents provided were concerned primarily with “marketing” the bonus plan, devoid of “concern for the community.”

DeFoor grilled Kerri Stewart, a former Curry chief of staff who now works for JEA, for writing a memo saying “Aaron is putting the plan on hold.”

Stewart and Zahn couldn’t get their stories to align.

“Our general counsel said very clearly this is illegal … the arrogance is deafening,” DeFoor said.

Councilman Garrett Dennis asked if JEA execs used WhatsApp or other modes of communication to exchange information out of public view. All said no.