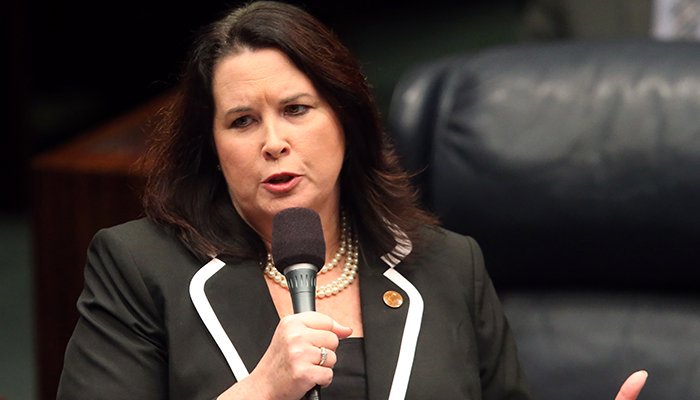 SB 404 would require minors get consent from one of their parents before obtaining an abortion. The Senate Rules Committee approved the bill 9-7. And Senate President Bill Galvano told reporters the bill will make the list of special orders next week and head toward a Senate vote the following week.

Florida already requires a parent be notified before a minor obtains an abortion, which Stargel acknowledged has been working. But Stargel said consent would foster more discussion within the family.

“I will say that the difference between what we have today … the subtle difference is consent involves the parent in the conversation of coming to a decision of what is the best thing to do and that they would agree upon that and consent upon that,” she said.

One change adopted Wednesday would raise the penalty for aborting infants born alive from a first-degree misdemeanor to a third-degree felony, punishable by up to five years in prison and a $5,000 fine. That amendment would also restructure the consent requirement into the current notification language, similar to Vero Beach Republican Rep. Erin Grall’s HB 265.

And the committee adopted an amendment by Senate Minority Leader Audrey Gibson to hold the judicial review process in a judge’s chamber. Stargel agreed a private setting would be less intimidating for minors than making their motion in front of the bench.

Stargel initially filed the bill last Session, but this year’s version adds a judicial bypass option to address concerns raised by the Florida Supreme Court. But during debate, Plantation Democratic Sen. Lauren Book argued protecting survivors of rape and incest is not as simple as a judicial bypass.

“I think that this can be very dangerous, and there are unintended consequences that will come from a measure such as this,” she said.

And Gibson said the bill doesn’t give parents any right they don’t already have from the current parental notification provision.

“Once a parent or parents are notified, if they choose to be engaged with their minor child, they have that right. We don’t have to tell them to do that,” she said.

“This bill isn’t about protecting our children, it’s about putting up new barriers to the most vulnerable people in our society and is an attack on abortion rights,” Rizzo said.

But in Galvano’s view, parents must be involved in a minor’s “substantial and permanent decision” to obtain an abortion.

“Parents are responsible for not only the medical care of their children, but also their emotional and spiritual well-being,” the Bradenton Republican said. “The serious and irrevocable decision to end a pregnancy involves undergoing a significant medical procedure that results, in many cases, in lifelong emotional and physical impacts.”

Senate leadership fast-tracked SB 404 through early meetings. Last week, on the second day of the Session, the bill passed the Senate Judiciary Committee on a 3-2 vote.

In a Wednesday morning statement, Agriculture Commissioner Nikki Fried weighed in. She argued most minors already ask their parents before obtaining an abortion and families should not be forced into discussion.

“Interference in women’s health choices has long been opposed by doctors, struck down by judges, and rejected by voters – but today’s Florida Legislature has chosen to fast-track yet another unconstitutional restriction on reproductive freedom. As a woman, I find this both outrageous and ridiculous,” Fried said.

“Let’s be clear about these bills – they’re not only a political charade devoid of empathy and reason, but a precursor to exterminating a woman’s right to choose in Florida altogether,” Fried added. “I urge all lawmakers who value freedom – in all its forms – to vote no on SB 404 and HB 265.”

After the bill’s adoption, Galvano praised Stargel for her “diligent” work in a statement. He added that the bill shows the importance of parental rights and combating infanticide in a statement.

“Today, as we mark the 47th anniversary of the legalization of abortion, I am pleased to see the Senate send such a strong statement of support for protecting innocent human life,” Galvano said.

“The fact that Republicans chose to vote on SB 404 on the anniversary of Roe v. Wade shows their true motives are to end abortion rights in the Sunshine State,” Rizzo said.

But there was no significance to the timing, Galvano said. And Stargel denied knowing it was the anniversary.

A coalition of pro-abortion advocates held a press conference outside the House chamber to honor Roe v. Wade’s anniversary. That group will include the Florida Alliance of Planned Parenthood Affiliates and its legislative manager, Laura Hernandez.

“We say keep your hands off of our rights,” she said. “We have seen what happens when the government attempts to infringe on the rights of people.”

Because of a medical emergency, which temporarily halted the hearing, committee Chair Sen. Lizabeth Benacquisto held public testimony to a handful of witnesses from both sides.

HB 265 is also ready for a vote in its respective chamber. But the Legislature will need to settle minor distinctions between the House and Senate versions before sending the measure to the Governor.