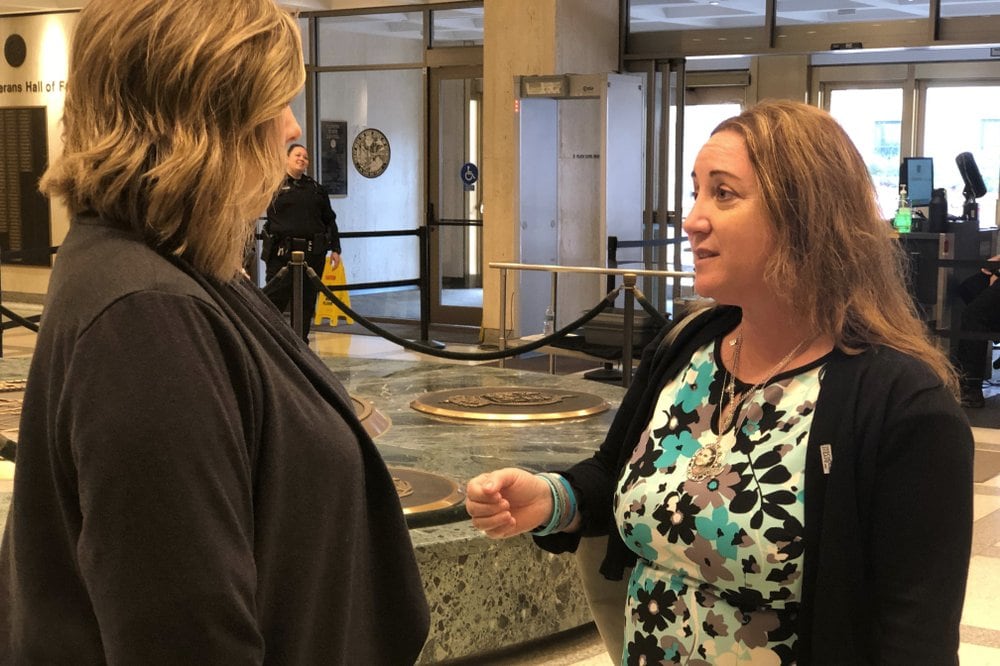 Linked over their grief and their efforts to bring about change.

For months, Laurie Giordano had been telling the story of her son to anyone who would listen — of how her Zach, a strapping 16-year-old football player, should never had collapsed in the sweltering Florida heat nearly three years ago. He died days later.

For weeks, Giordano has been driving six hours each way to meet with lawmakers in the state Capitol to push them to act, to understand the unbearable grief of a parent trying to bring meaning to a child’s death.

At the Capitol in Tallahassee, Giordano crossed paths Thursday with Lori Alhadeff, who lost her 14-year-old daughter Alyssa in the Parkland school shooting. Both spoke about how tragedy and loss is motivating them to lobby for legislation meant to save other children and other parents from suffering.

Giordano and Alhadeff are linked over their grief of losing children and working to get lawmakers to make schools safer, albeit in different ways.

Alhadeff was back to urge lawmakers to require panic buttons at schools to more quickly summon for help. That was one of many school safety measures spawned by the shootings on Feb. 14, 2018, at Marjory Stoneman Douglas High School that killed 17. The bill, known as “Alyssa’s Law,” requires each public elementary, middle, and high school campus, including charter schools, to put in place a mobile system to alert authorities of emergencies.

And Giordano was again at the Capitol to take a seat at the public gallery overlooking the Senate floor, where lawmakers unanimously approved a bill renamed the “Zachary Martin Act.” The legislation would require public schools across Florida to do more to prevent heat-related injuries and deaths.

For a few minutes, they spoke about their children and their shared mission. Giordano admired the pendant hanging from Alhadeff’s neck that bears Alyssa’s smiling face.

“I don’t know how everything went down in your tragedy, but I just kept thinking that help was on the way,” Alhadeff told Giordano about that fateful day in February 2018.

“And help was not on the way,” Giordano interrupted, finishing Alhadeff’s thought.

Another Florida mother suffering a loss, Denise Williams, roamed the Capitol Thursday to begin lobbying for a new law in the name of her daughter Terissa Gautney, who died on a school bus in 2018.

Since losing their daughter, Williams and her husband have been pushing school boards and seeking the help of lawmakers to require life-saving training for school bus drivers and better communications equipment on school buses.

She drove 250 miles (400 kilometers) from her home in Clearwater to the Capitol, describing the trip as a spur-of-the-moment decision. She sat watching the Senate and House conducting business, and she took in whatever she could to plan out her next steps to bring about change.

“I came here to see what I could do,” Williams said.

Williams would later crossed paths with Aldaheff at the Capitol. She said she wanted to learn from Alhadeff, who is now a member of the Broward County School Board.

“Our children were lost in a traumatic situation, and my heart breaks for any other mother. And I can feel the pain that they feel,” Alhadeff said of Williams and Giordano. “Even if it was different kinds of tragedies, it’s still the pain of losing a child.”

Giordano’s son died in the summer of 2017 after collapsing in the Florida heat during practice.

Her son, she said, would still be alive if life-saving equipment were at the sidelines during practice — perhaps a water-filled tub — to immediately cool down his body.

“I’m exhausted, but it’s OK. Once this is over, I’m going to collapse for a week,” Giordano said while waiting for lawmakers to take action on her bill.

“A six-hour drive is a long time to be alone with your thoughts,” she said, “that’s when the emotions is really hard. That’s when the tears flow.”

If passed by Legislature and signed by Gov. Ron DeSantis, public schools would be required to have a tub or other large container filled with cold water at the sidelines during all games and practices. Schools also would be required to have defibrillators to resuscitate stricken athletes. The proposed law would also require schools to train personnel on how to recognize signs of heat-related ailments, including potentially deadly heat strokes, and to take life-saving actions.

But even at the brink of success, Giordano said there is little comfort.

“I still cry every day,” she said. “There is no consoling. No, it doesn’t get better.”