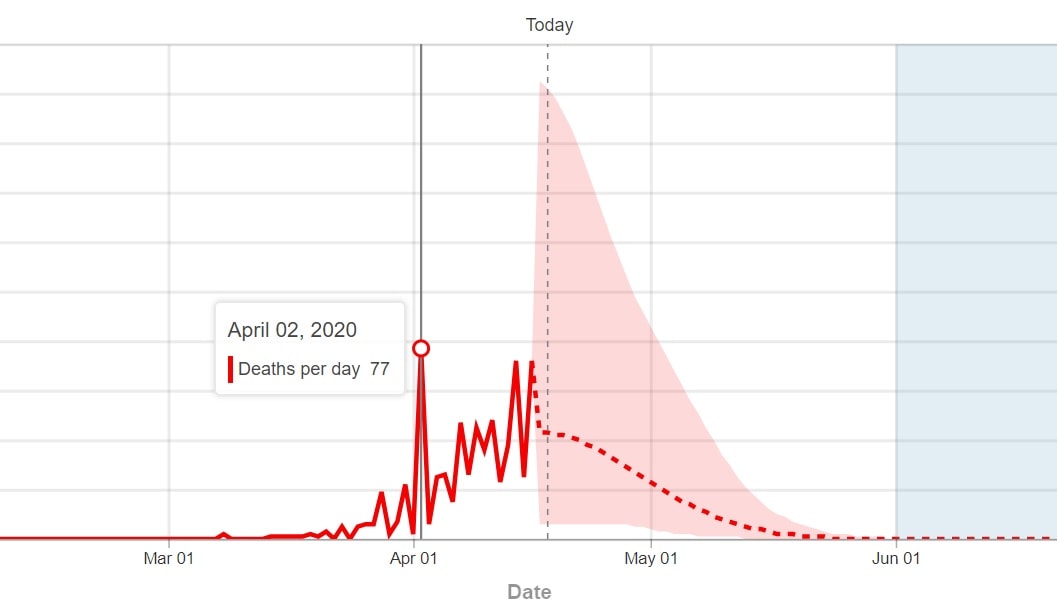 On April 2, 77 Floridians died, looking like the peak of the outbreak.

Florida has passed the projected peak in daily fatalities and hospitalizations from the novel coronavirus, according to one influential model.

The model, by The Institute for Health Metrics and Evaluation, suggests the state passed the peak in new deaths on April 2, when 77 people died, and that the final death toll will be 1,363 after an update Saturday. On Monday, the model’s prior update guessed 4,748 Floridians would die by the end of the outbreak with 128 Floridians dying per day at a peak on May 6.

Florida also passed the peak need for hospital resources on Tuesday, when it believed the state needed 1,535 hospital beds. The state has been prepared with 20,184 beds.

On Tuesday and on Thursday, 72 people died and it’s possible 185 people could still die based on the most grim outlook. But the most likely scenario suggests fewer than 43 people will die per day between now and the end of May, when the model expects new fatal cases to disappear.

Surgeon General Scott Rivkees told reporters the state was “essentially at a plateau” in the curve of daily new cases on Monday.

The White House has referenced the model, made in association with the University of Washington School of Medicine. After this and other models showed the number of coronavirus cases continuing to rise, President Donald Trump changed his tune on extending the initial advisory for Americans to stay home.

As of Saturday morning, 25,269 people have tested positive for COVID-19 in the state and 740 Floridians have died. DOH confirmed 14 fatalities since Friday evening, though officials will release a second report Saturday evening.

Additionally, 3,649 Floridians have been hospitalized during the course of the pandemic. Although the peak need is likely in the past, the state could still need up to 5,229 hospital beds.

New York and California have also passed their likely peaks in daily deaths, likely 837 and 96 respectively. However, those states reached that hopeful peak on Thursday.

A task force on reopening Florida, assembled by Gov. Ron DeSantis, met for the first time Friday. And the day before, Trump released the White House’s guidelines or “Opening Up America Again.”

Lawmakers and business leaders have called for a data-driven approach to reopening the economy, and health officials, including Rivkees, have cautioned social distancing and other precautions could be the new normal until a vaccine is developed, possibly months or years down the line.