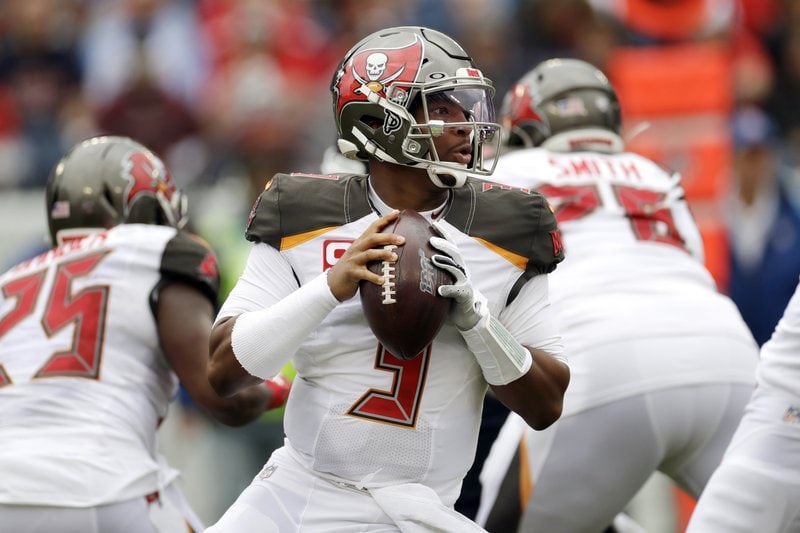 Quarterback first to have 30 touchdowns and interceptions in same seasons.

The Saints and quarterback Jameis Winston are working on a contract proposal to make the former Buccaneers starter a backup to Drew Brees in New Orleans, a person familiar with the situation told The Associated Press.

Winston and the Saints are in “advanced” talks, the person said, speaking to The Associated Press on condition of anonymity Sunday because negotiations were ongoing. The person declined to say whether there was any agreement on either the length of the contract or financial terms.

Yahoo Sports first reported the Saints’ interest in signing Winston as a backup.

Meanwhile, the Saints have announced that dynamic reserve QB and utility player Taysom Hill has a new two-year contract.

Winston is coming off a season in which he led the NFL with 5,109 yards passing and ranked second with 33 touchdown passes, but he also led the NFL in interceptions with 30. That made Winston the first QB in NFL history to have at least 30 TDs and 30 interceptions. Tampa Bay allowed Winston, whom it drafted first overall out of Florida State in 2015, to enter free agency and replaced him with former Patriots QB Tom Brady.

Now it appears Winston is open to going from five-year NFL starter to being Brees’ understudy in hopes of rebuilding his credentials as a prospective franchise quarterback. Teddy Bridgewater recently did just that, serving as Brees’ backup for two seasons before the Carolina Panthers signed him last month to replace their longtime starter, Cam Newton.

Winston was a two-year starter at Florida State, where he won the Heisman Trophy and led the Seminoles to a national title as a freshman in the 2013 season.

In five seasons with the Buccaneers, he has passed for 19,737 yards and 121 touchdowns while throwing 88 interceptions. But while he was productive statistically, that didn’t amount to winning. The Bucs went 28-42 in games Winston started.

Winston also became known for making news off the field. He was suspended for the first three games in 2018 after the NFL investigated allegations by a female ride-share service driver that the quarterback made unwanted sexual advances.

The driver never reported the matter to authorities but did notify her employer, Uber.

During college, Winston was accused of raping a fellow student at FSU but was never charged. The university in January 2016 settled a Title IX lawsuit with Winston’s accuser for $1.7 million over its handling of the allegations.

Winston also was implicated in a shoplifting case involving about $33 in crab legs and crawfish.

Saints coach Sean Payton has said throughout this offseason that he intended to have three active quarterbacks on game days so that Hill may continue in a multifaceted role that has helped the Saints go 13-3 the past two regular seasons.

A person familiar with the contract told the AP that the deal for Hill, who was a restricted free agent and turns 30 in August, is worth $21 million, with $16 million guaranteed and up to $1 million in incentives. The person spoke on condition of anonymity Sunday because financial terms have not been announced.

On Instagram, alongside a photo of himself and his pregnant wife, Emily, Hill wrote: “I am humbled and grateful that my wife, future son, and I get to continue living our dream in the city we love, with the people we love!”

Hill has emerged as a potent option for the Saints in a variety of roles on both offense and special teams. He has lined up as not only a change-of-pace, read-option QB, but also as a running back, tight end or receiver. Hill serves as the up-back on punts and has successfully executed fakes. He also has blocked a punt and even dabbled in returning kickoffs when needed.

Hill has rushed 64 times for 352 yards and three TDs in the past two seasons. During that span he also has caught 22 passes for 238 yards and six TDs while competing six passes for 119 yards.

Brees has referred to Hill as a “unicorn,” saying he’s “never seen anybody like him that can do all the things that he can do.”

nextRob Bradley: How to smartly, safely reopen Florida for business