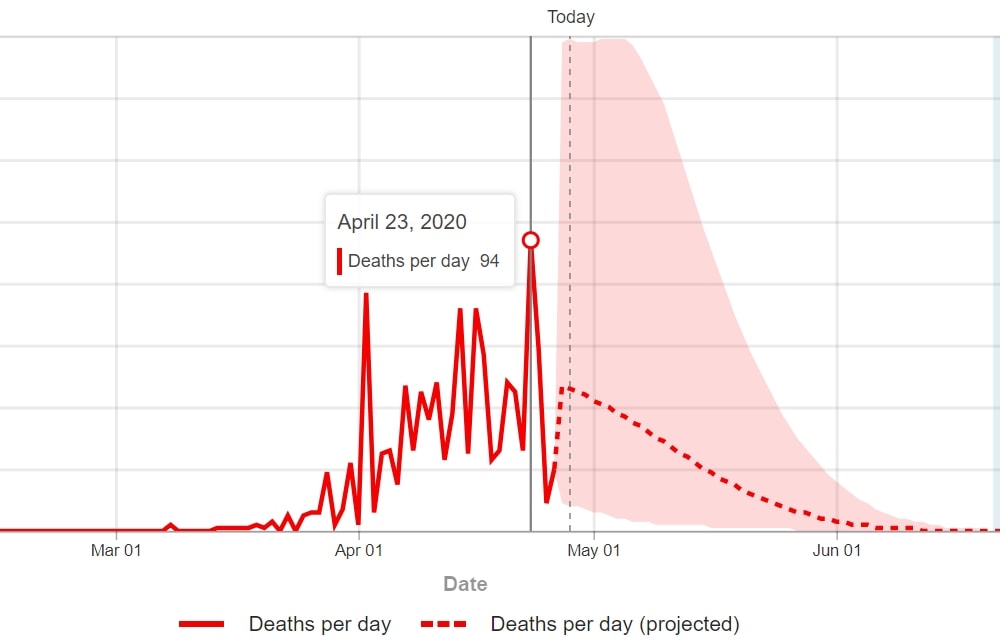 Florida is still past the peak of COVID-19 daily deaths, according to an influential model.

An influential COVID-19 model added 377 deaths to its anticipated final death toll for the current outbreak in Florida in a late Monday update.

The new total, 1,914, is far from the 6,766 predicted before Gov. Ron DeSantis‘ stay-at-home order began. That new toll is also 551 more than the 1,363 deaths estimated in an outlook from earlier this month.

While 1,914 deaths is the most likely outcome based on The Institute for Health Metrics and Evaluation (IHME) model, as few as 1,165 or as many as 4,697 Floridians could die based on the model’s uncertainty intervals. As of Tuesday’s report from state health officials, 1,171 Floridians have died.

The model still agrees the state has passed the peak in daily deaths, but that peak occurred later than previously thought. It now shows that 94 people died on Thursday when the previous peak was 77 deaths on April 2.

However, according to state health officials, only 44 people died on Thursday. By the state’s data, the peak occurred on April 17, when 48 people died.

IMHE did not immediately respond to inquiries on the disparity.

“Health care workers are extremely busy caring for COVID-19 patients, so they may fall behind on reporting deaths,” according to IMHE’s FAQ section. “Once health care workers catch up on their reporting, however, it may appear as though there has been a spike in daily deaths.”

Thursday’s report confirmed 60 deaths, but some of those deaths may have been confirmed the day before, after the previous snapshot taken the evening before. Additionally, others may have died after the Thursday evening report.

According to the model’s trend line, Florida may still be seeing deaths well into June, but by late June, the state could start a “containment strategy.” However, DeSantis is expected to make an announcement Wednesday on reopening the state. His current stay-at-home order expires Thursday.

On Tuesday in Washington, DeSantis and Florida were extolled as role models in the path forward by President Donald Trump.

Florida is ready to move forward, DeSantis said, in a “data-driven” way.

The Governor has faced criticism from Democrats for not including more health officials on his Re-Open Florida Task Force, which has several private sector leaders and elected officials on its top panel but only one health expert.

Nearly 33,000 people have tested positive for COVID-19 in the state.

The White House has referenced the model, made in association with the University of Washington School of Medicine. After this and other models showed the number of coronavirus cases continuing to rise, Trump changed his tune on extending the initial advisory for Americans to stay home.

previousUnemployment: Application flow picks up with state system back on line