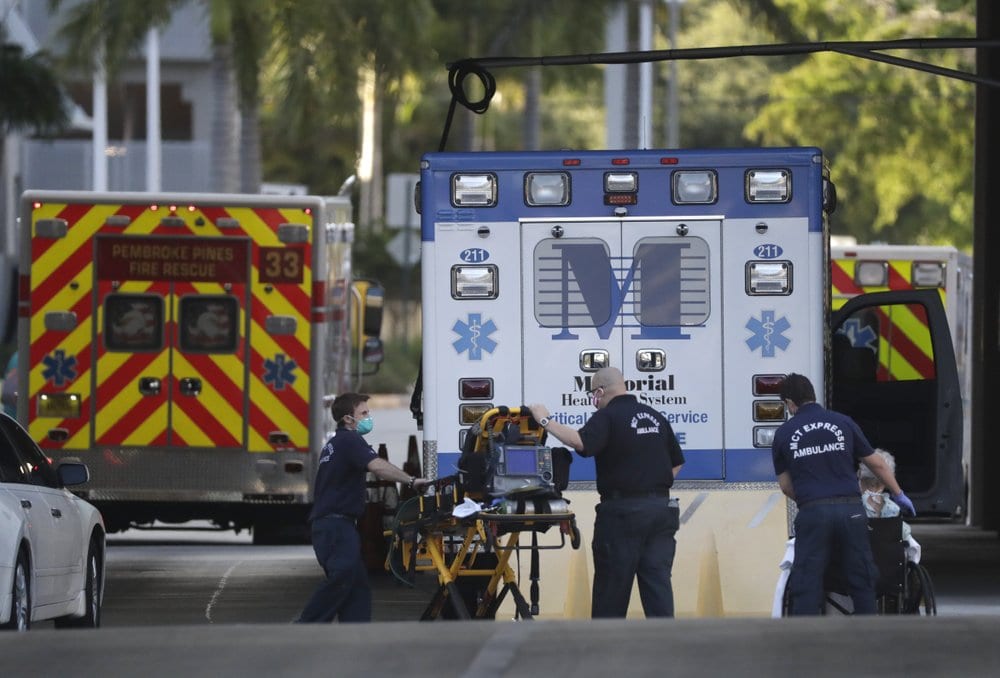 Crews return to their ambulances, Tuesday, May 12, 2020, at Memorial Regional Hospital in Hollywood, Fla. Emergency room visits have dropped by almost 50% across Florida since the coronavirus pandemic began as hospital officials on Tuesday warned that patients suffering from heart attacks and strokes are delaying or refusing care because they are afraid of going to the hospital. (AP Photo/Wilfredo Lee)

Among the mysteries of the novel coronavirus is why younger people who have contracted the disease have strokes.

To that end, Sen. Marco Rubio is working across the aisle with Minnesota Democratic Sen. Amy Klobuchar to find out.

The Senators contacted the Centers for Disease Control and Prevention to explore the correlation between the disease and strokes in people middle-aged and younger, a “possible trend of increased stroke risk among younger and middle-aged Americans who are, or previously were, infected with coronavirus (COVID-19).”

These medical episodes, the Senators note, are serious — “the deadliest type of stroke that impacts movement, speech, and decision-making.”

“With over 1 million confirmed COVID-19 cases in the United States as of May 13, even a relatively low prevalence of stroke in this particular patient population could lead to a significant increase in the number of stroke patients in our country,” Klobuchar and Rubio warn.

“Increased incidence of stroke amongst younger COVID-19 patients is particularly concerning because typically about two-thirds of people typically hospitalized for stroke are over the age of 65, but most of these recent strokes amongst patients with COVID-19 are not traditionally high-risk populations.”

One theory as to why strokes may be affecting younger populations centers on the inflammation caused by the virus, which thickens the blood. Studies in China and New York have both jibed with that theory, and Rutgers University is attempting a similar survey in New Jersey.

Strokes among the young are particularly dangerous, according to an April study, because of social isolation and reluctance to make hospital visits. Hospital visits for stroke symptoms are down 40% since the pandemic began, reflecting that anecdotal evidence.

In addition to asking the CDC to explore the stroke/coronavirus connection, Klobuchar and Rubio “urge the CDC to quickly alert the public and medical professionals about the possible correlation between COVID-19 and strokes.”