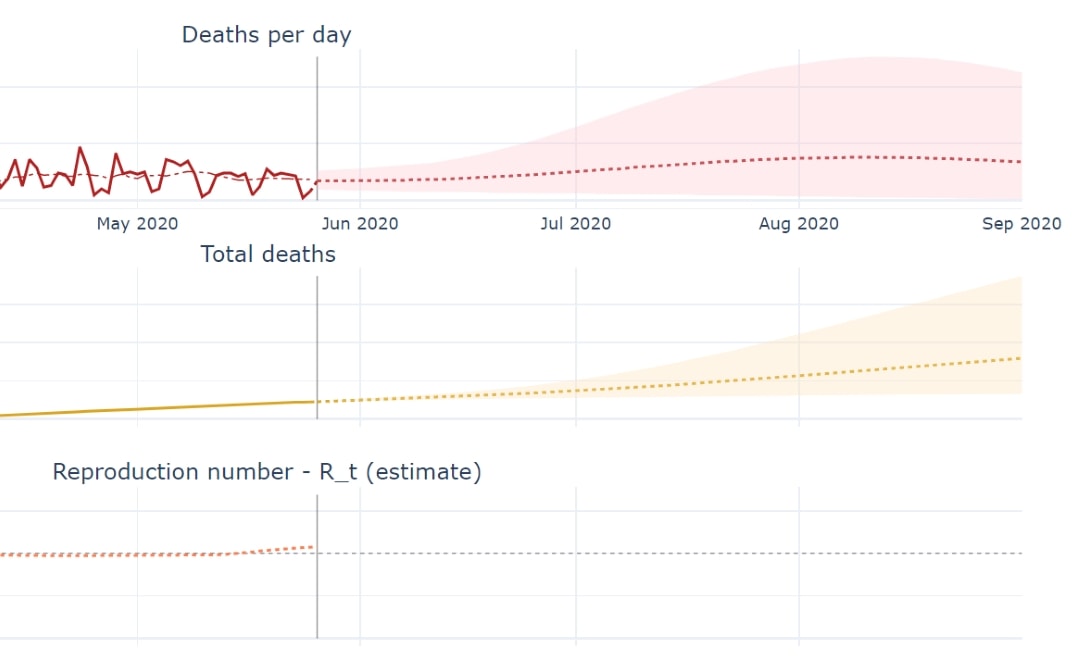 The model is one of 16 monitored by the U.S. Centers for Disease Control and Prevention.

Florida could see a 40% increase in the total number of deaths throughout the month of August in a second COVID-19 wave predicted by one model.

That model, produced by MIT graduate and independent data scientist Youyang Gu, suggests the state could reach 76 deaths per day by mid-August. On Tuesday, he updated the model to extend to Sept. 1 instead of Aug. 4, where it ended under previous iterations.

Currently, an estimated 36 people die per day in Florida, according to the model, which uses machine learning on top of a classic infectious disease model. It also includes predictions for the United States, the other states and territories, more than 60 other countries and 14 U.S. counties.

One included breakout is Miami-Dade County, which is suggests could have a 21% increase in deaths over the same period with seven to nine people dying daily.

However, the model’s upper and lower bounds suggests the state could see 253 deaths per day in mid-August or continue a downward trend throughout the month with daily deaths in the single digits throughout. As for Miami-Dade, it leaves room for as many as 29 deaths at a mid-month peak or zero at the same point.

As few as 3,270 Floridians and 922 Miami-Dade residents would be dead by September under the model’s best-case scenario.

“Note that our projections are not set in stone,” Gu tweeted Tuesday. “My hope is that people will use our projections and take actions to actively reduce the spread of the virus. There is still time to impact the future.”

The model attempts to estimate the reproduction number, the average number of new people infected by one infected individual, over past months. For Tuesday, it pegged that count at 1.07 statewide — meaning the number of daily infections would be growing — and 0.98 in Miami-Dade, with both growing.

As for daily infections, that peak could come in mid-July statewide, when an estimate 10,112 people, including those not tested, would be infected daily. Gu’s model estimates 5,000 people were infected Tuesday.

In Miami-Dade, a peak of 1,224 daily infections could happen in mid-July, up from 989 Tuesday.

Nationally, deaths would peak at 1,320 in late July under its likeliest projection. As for new infections, it estimates 176,299 new cases around the second week of July.

The U.S. Centers for Disease Control and Prevention aggregates Gu’s model as one of 16 models used in its national COVID-19 forecast.

But the model makes a series of assumptions, generalizing each state’s coronavirus response, which Gov. Ron DeSantis has derided about other models. Nuances, such as nursing home policies,

“How do you model Florida moving to Phase One with 64 counties and then not with, say, Miami-Dade,” he said earlier this month. “I have not seen any appreciation for any of that.”

But as of late, the model has been more or less accurate, even underpredicting the pandemic’s impact to Florida. On May 1, Gu’s model predicted 2,150 Floridians would be dead by Tuesday. According to the Department of Health, 2,259 residents had died by Tuesday morning.