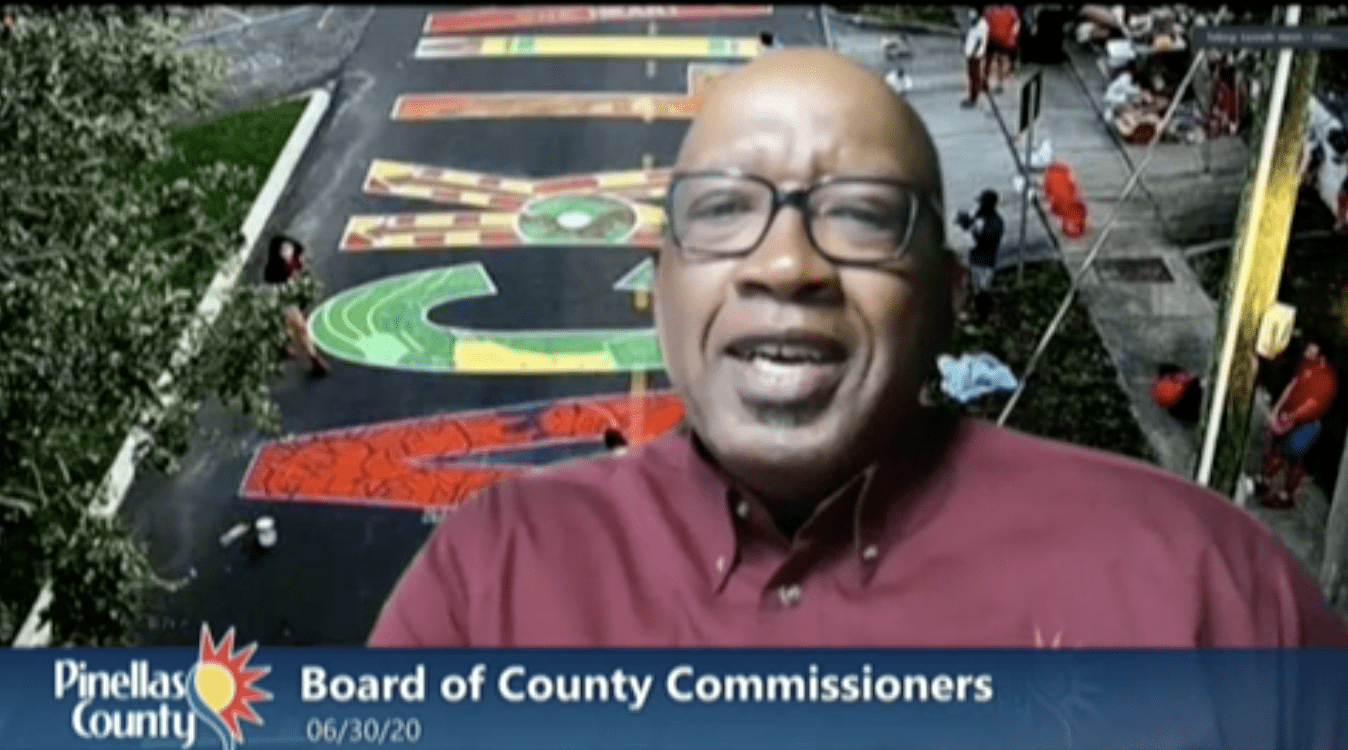 Peters said she's heard from constituents who were offended by the image.

For the past couple of weeks, Welch has appeared in virtual meetings in front of an image of the Black Lives Matter street mural in South St. Pete in front of the Carter G. Woodson African American History Museum.

Peters said she’s received emails from constituents who are offended by the image.

“I have no problem with the artwork behind him personally, I don’t. But the bottom line is once you start one person having a sign and that is in fact a sign, even though it’s artwork – now what’s to say I’m not going to put up a piece of artwork about, abortion, just for an example,” she said Tuesday.

Peters had previously asked staff about the issue and, on Tuesday, brought it up at the end of a meeting discussing the local state of emergency and CARES Act funding related to the ongoing COVID-19 crisis.

She suggested creating some sort of “rule book” outlining policies and procedures for commissioners, a document that does not currently exist.

Welch was the only Commissioner to take issue with the entire premise. None of his colleagues weighed in on the debate over his Black Lives Matter background, but each said they’d be willing to consider a guiding policy document, noting past troubles with new Commissioner on-boarding.

Still, the controversy centered on Peters’ desire to have Welch remove his background.

“I know you’ve got a problem with my Black Lives Matter background,” Welch said to Peters, noting he has not received complaints and that the mural has received “worldwide acclaim.”

He compared displaying it at meetings to wearing a lapel pin supporting a certain cause.

“In 2020 in the world that we’re living in we need to speak out on issues,” Welch said. “This is a Zoom background and I will continue to use this Zoom background because I feel that strongly about it.”

No official action was taken.

The issue comes as racial tensions, though subsided since earlier this month, continues to spur protests over police brutality and racial injustice.

But the issue, among some, still remains controversial, as evidenced by the continued prevalence of people arguing all lives matter.

“It is just shameful that Commissioner Peters has an issue with a few letters of our BLM street mural being used as Commissioner Welch’s background. Her judgment is way off and her politics are clearly out of step with who are in Pinellas and St. Pete. Really unbelievable,” Kriseman wrote.

It is just shameful that Commissioner Peters has an issue with a few letters of our BLM street mural being used as Commissioner Welch’s background. Her judgment is way off and her politics are clearly out of step with who are in Pinellas and St. Pete. Really unbelievable. https://t.co/uh1H4QzPZw