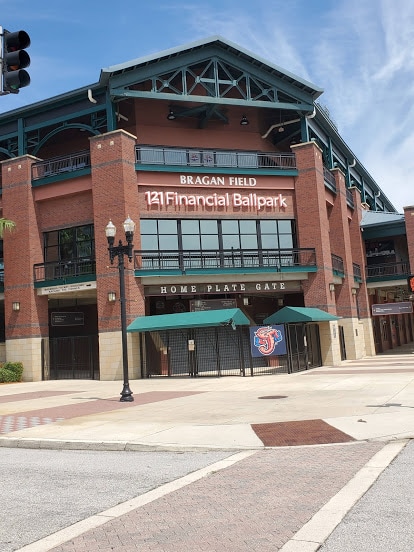 While 123 Financial Ballpark is quiet now due to the coronavirus outbreak, the Jacksonville Jumbo Shrimp don't know when baseball games will return to the stadium. Photo by Drew Dixon.

Minor League Baseball won’t happen in Florida or anywhere else this year due to the coronavirus outbreak.

MiLB went through the formalities Tuesday and announced what many had presumed academic: that the farm clubs, meaning Single A clubs through Triple A, are cancelling their seasons. MiLB dashed any hope for a season late Tuesday.

“These are unprecedented times for our country and our organization as this is the first time in our history that we’ve had a summer without Minor League Baseball played,” said Minor League Baseball President and CEO Pat O’Conner. “While this is a sad day for many, this announcement removes the uncertainty surrounding the 2020 season and allows our teams to begin planning for an exciting 2021 season of affordable family entertainment.”

The Minor League Baseball farm system was founded in 1901.

In Florida, there are nine Minor League operations. Most are Single A franchises and those farm clubs are in cities where Major League teams hold spring training such as Jupiter and Fort Meyers among others.

Two Minor League franchises are Double A with one being the Jacksonville Jumbo Shrimp and the other the Pensacola Wahoos.

Jumbo Shrimp officials were predictably disappointed Tuesday. That franchise had ambitiously announced they had hoped to start the season June 15 after postponing opening day in April.

“We are incredibly disappointed and crushed to not have a Jumbo Shrimp baseball season at 121 Financial Ballpark in 2020,” said Jumbo Shrimp Executive Vice President and General Manager Harold Craw. “We still look at ourselves as leaders in part of the safe reopening of Jacksonville, and safety for our fans and staff will always be our top priority. Thanks to the trust instilled by the community, we are providing alternative affordable and fun outdoor and socially-distanced events at 121 Financial Ballpark. We will hopefully await Jumbo Shrimp baseball to return in 2021.”

The Jumbo Shrimp held a screening of Frozen II on the center field video screen as part of  a family night at the downtown stadium May 30 then held Father’s Day weekend events and plans an Independence Day celebration Friday night complete with a baseball film on the video screen and fireworks to complete the night.

Jumbo Shrimp officials said fans who purchased tickets will get credit for 2021 games. This is the first time there hasn’t been professional baseball in Jacksonville since 1969.