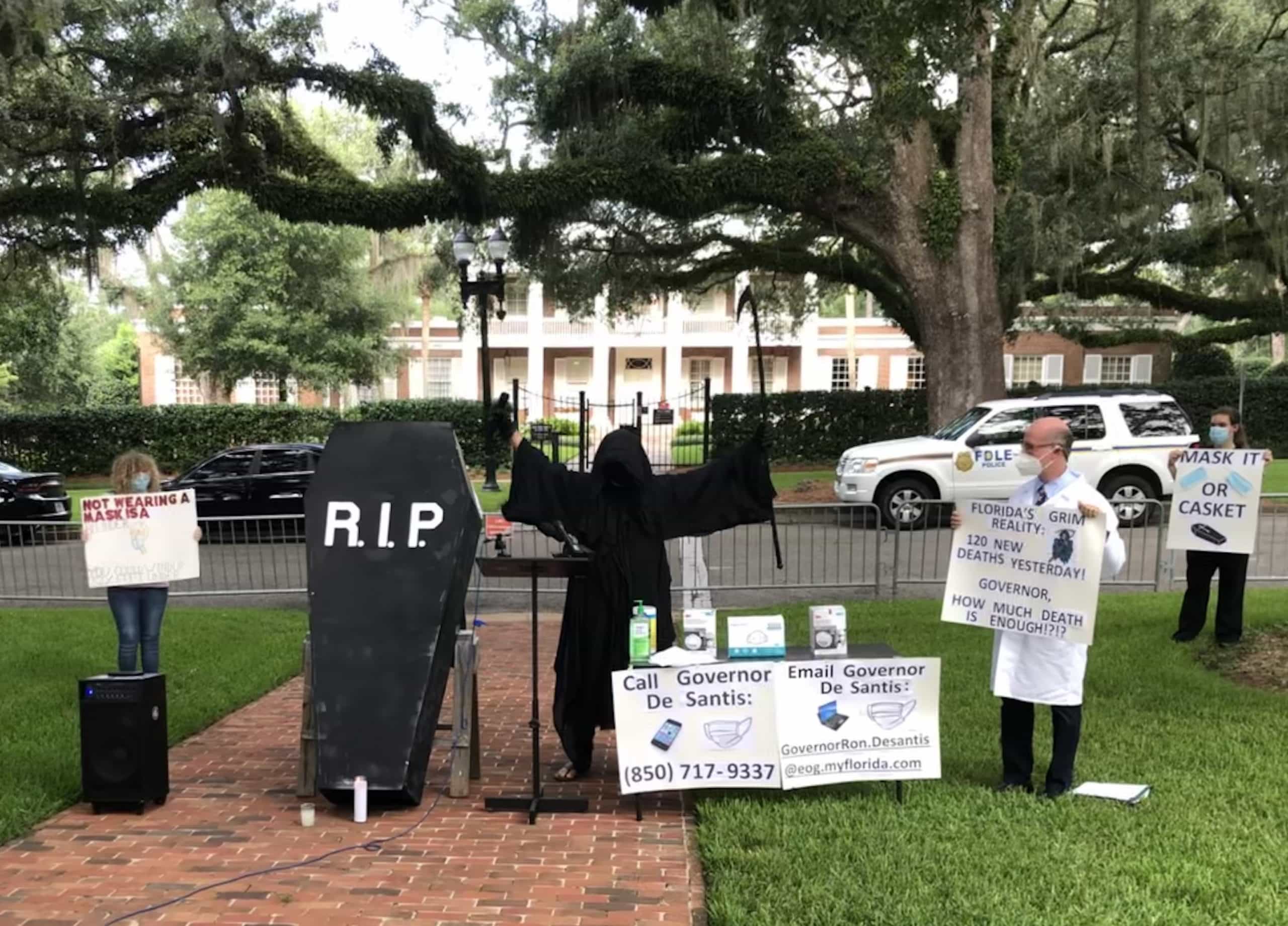 Attorney Daniel Uhlfelder, dressed as the Grim Reaper, raises his scythe alongside doctors to compel Gov. Ron DeSantis to issue a statewide mask mandate on July 10, 2020. Photo by Jason Delgado.

The Grim Reaper joined a handful of Florida doctors at the Governor’s Mansion on Friday to urge Gov. Ron DeSantis to issue a statewide mask mandate in public places.

Armed with a graveyard cross and coffin, the group called for DeSantis to listen to the advice of scientists, doctors and physicians amid the resurgence of COVID-19 cases in the Sunshine State.

“The Governor is taking us in the wrong direction and has ignored the advice of doctors and scientists and even his own Surgeon General who advises that we all wear masks,” said Florida Physicians for Social Responsibility Board Member  Dr. Ron Saff.

“Physicians heard the footsteps of the Grim Reaper approaching several months ago when Governor DeSantis stacked his ReOpen Florida Task Force with business leaders rather than medical and pandemic experts, and the task force recklessly decided to reopen Florida for business prematurely and without mandating masks,” added Dr. Saff.

While mask mandates have been issued at the local level in some jurisdictions, Dr. Donald Axelrod argued that anything less than a state order is insufficient.

“In Florida, the Governor is making a similar mistake as the leader of our government at the federal level,” Dr. Axelrod said. “While wearing of face coverings is proven to reduce spread of COVID-19, in Florida the Governor is leaving it up to local governments to mandate masks. In municipalities without mandates, those choosing not to wear face coverings are infecting those that are.”

The Physicians for Social Responsibility has started a petition to compel DeSantis to issue a mask mandate. Thus far, the petition has over 1,000 signatures from physicians across the state.

Additionally, the group is encouraging Floridians to call and email the Governor’s office to demand action.

Howard Kessler, a local physician and president of Florida’s Physicians for Social Responsibility, said the novel coronavirus needs to be treated as a “very deadly and serious virus.”

“It is not a hoax, and it is not a political issue – it is a health issue,” Kessler said. “COVID-19 should not be trivialized or discounted. It has already killed over 130,000 Americans in just a few months and kills about 50 people every day in Florida.”

As of Friday, state health officials reported 844 more patients hospitalized with COVID-19, the most reported in a 24 hour period. With those new hospitalizations, 17,602 Floridians in hospitals have tested positive for the novel coronavirus. That more than doubles the previous record of 380 new hospitalizations set Thursday.

Attorney Daniel Uhlfelder, who is more commonly recognized as the Grim Reaper, spoke out against the Governor’s decision to reopen Florida public schools in August.

Uhlfelder alleged that DeSantis is “trying to kill our children” and told the press he has a direct message for the Governor.

“Our children are not your tribute,” Uhlfelder said.

Since early in the pandemic, Uhlfelder has traveled to beaches and cities across the state in protest of states’ responses to COVID-19. Dressed as the Grim Reaper, Uhlfelder has made international headlines by speaking out against reopening Florida and its beaches, all while donning the costume and wielding a scythe.

“I’m doing this because our Governor is a derelict Governor,” Uhlfelder said. “He is not taking this seriously, forcing me, an educated family man to travel this state and fix his mess in a costume.”

“Our Governor is cowering to President Trump and special interests and he’s killing us. I’m not gonna stop. If I have to wear this costume till I pass out in Key West, I will because I love Florida and I care about Florida.”