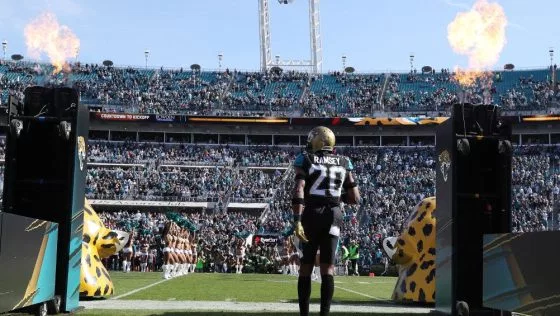 Jalen Ramsey is one of many players who made Jacksonville love its Jaguars again.

In a harbinger of troubled times in the age of coronavirus for the NFL in Florida, the Jacksonville Jaguars announced Friday they will drastically reduce attendance capacity at games this year.

The team’s website posted a major announcement detailing how the franchise will limit stadium attendance to 25% capacity for 2020 games at TIAA Bank Field this season.

“In compliance with state and local authorities and following CDC [Centers for Disease Control and Prevention] social distancing guidelines, TIAA Bank Field will be able to seat approximately 25% of its capacity at each Jaguars home game in 2020,” said Chad Johnson, senior vice president of sales and service for the Jags.

TIAA Bank Field has always been a sizable stadium and vacant seats are not unusual for the Jaguars who have struggled in the win column for most of the past decade. But a radical reduction of attendance means the stadium could be a lonely place on NFL Sundays.

The venue holds about 67,000 fans. Under the Jags’ planned reduction, that would allow about 16,000 fans into the stadium.

The team acknowledged details for stadium stipulations for fans are still being reviewed. But there’ll be additional announcements for fans as the season unfolds.

“Alongside our stadium partners and national and local healthcare experts, we have and will continue to work diligently to develop new protocols to ensure our team can return to the field with a clear focus on winning and our fans can return to the stadium with peace of mind,” Johnson said.

There are already plans in place to deal with season ticket holders which include:

— All season tickets will be returned, and funds paid to date will be credited to accounts. Any payments scheduled for July have been canceled. Season ticket members will have the opportunity to apply credited funds towards the purchase of tickets this season or in 2021.

— Full cash refunds will also be made available upon request.

— The Jaguars are working with Ticketmaster to develop a new seating chart that allows for six feet of distance between unaffiliated parties. In early August, a new season ticket plan for 2020 will be introduced to existing season ticket members first. Access to tickets will be based on a variety of factors including account tenure. Based on demand, some single-game tickets may become available to the general public at a later date.

All fans attending games will be required to wear face masks or coverings in order to get into the stadium.

The first home preseason game for the Jags is scheduled for Aug. 29 against the Washington Redskins. The regular season home opener is slated for Sept. 13 against their AFC South division rivals the Indianapolis Colts.

The Jaguars’ development is the latest in a multitude of impacts on the sports world due to COVID-19. The Ivy League scrapped all college sports for the fall and the Big 10 NCAA athletic conference already announced all sports games will be limited to conference opponents only this fall.