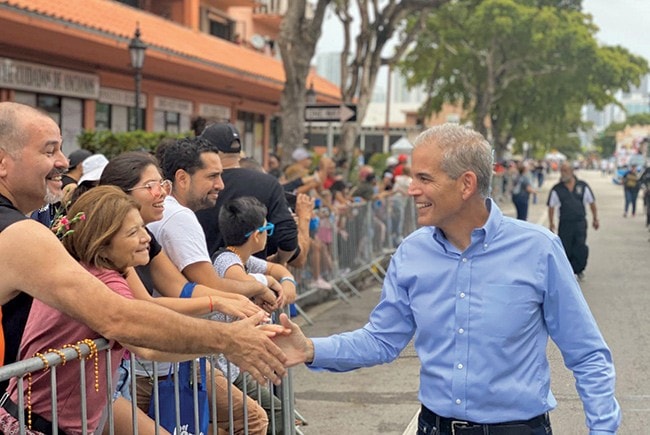 Alex Penelas racks up endoirsements as he heads to the primary.

The most populous county in Florida has one of the most crowded fields of contenders to become its next Mayor — as well as a potentially historic decision.

Daniella Levine Cava — who, if elected, would become the first woman Mayor ever in Miami-Dade Country — is trailing Penelas in some polls, but she is standing as the most formidable fundraiser out of the roster of the County Commissioners.

The candidates are running to replace Carlos Giménez, who was term-limited and is now running for a congressional seat.

In the event no candidate receives 50%  of the vote on Tuesday, a high likelihood, given this congested race, the top two candidates will advance to a runoff election on Nov. 3.

The next Mayor will wield unprecedented economic power, as Miami-Dade’s budget came in just shy of $9 billion in the 2019-2020 fiscal year, and the future of transportation in the county is sure to be one of the most pressing issues of the election.

Penelas implemented a half-penny tax for transportation in 2002 during his previous mayoral tenure, and a 2015 study of its efficacy noted that municipalities had received $469,401,331 in proceeds by the end of fiscal year 2014 and spent nearly half of that amount — $213,247,780 — on transit and transportation-related activities.

The Riders Alliance — a non-profit organization advocating for safer streets and better public transportation, rated Penelas the highest of the candidates in the mayoral field, but Levine Cava was a close second. Both Bovo and Suarez were dinged for supporting the Kendall Parkway and the expansion of some highways.

The Miami Herald reported that Penelas, Levine Cava, Bovo and Suarez all said they would not raise taxes in a recent debate.

Levine Cava earned the nod from the Service Employees International Union, one of the state’s largest unions, and she has said she will champion equal pay for women and increasing the living wage.

Penelas has been firmly in control of the fundraising race, and he earned a late endorsement from Miami-Dade County Commissioner Audrey Edmonson on Thursday.

What does the polling say? That depends on who you ask.

The Levine Cava campaign has floated a few internal polls that show her campaign competitive heading into Tuesday.

The Penelas campaign has also shown its own polls indicating his prominence in the race and verifying findings in Cava’s polls. And a third-party poll viewed by Political Cortadito indicated that Bovo may qualify for the runoff.

Bovo, who represents District 13 on the County Commission, is a former Representative from District 110 who has earned the endorsement of Lt. Gov. Jeanette Nunez, Miami Lakes Vice Mayor Nelson Rodriguez and Sweetwater Commissioner David Borrero. Bovo has raised more than $500,000 during the campaign.

Suarez, the Commissioner from District 7, previously served as Miami Mayor. Gimenez preceded Suarez in District 7, and Suarez is hoping to be able to succeed him in office once again.