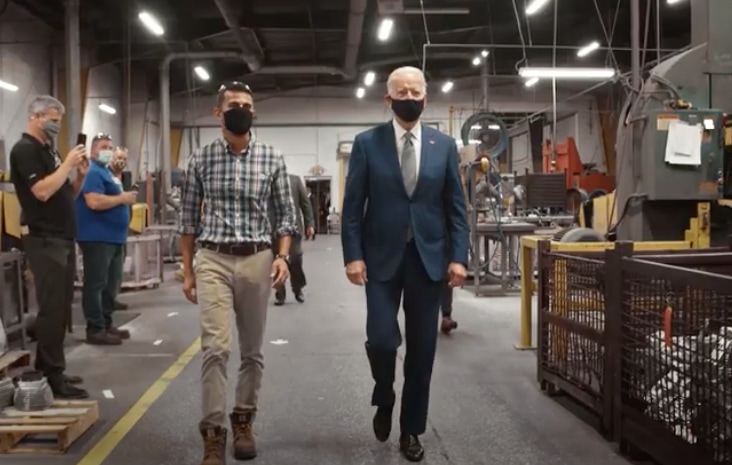 The campaign announced Friday morning it is launching five new commercials — three of them 60 seconds in length. They’ll run nationally on cable networks and on broadcast television and streaming and other digital platforms in the 16 states Biden has identified as targets, starting with Florida.

The ads all go after President Donald Trump directly on issues, including the coronavirus crisis, comments about military, support for farmers, manufacturing jobs, and the economic divide between Wall Street and Main Street.

The campaign did not announce how much money it was putting behind the ads, but Biden has been burning $40 million to $60 million a week in recent weeks, an amount that has been increasing, particularly as it keeps adding states to its list of targets. Florida has been on that list from the start.

In “Laser Focused,” a 60-second spot, Biden seeks to characterize Trump as someone focused only on the stock markets, while Biden is focused on working families. It also blames Trump for the economic collapse that occurred during the coronavirus crisis, saying it occurred because of his failures to get the pandemic under control and to help working people.

In “More Important,” a 60-second spot, retired Army Sgt. 1st Class Paul Cruz of Florida talks about his duties conducting military funerals. He expresses how offended he and other service members and veterans were by reports that Trump referred to them as “suckers and losers.” He calls Biden “a unifier” who understands what military personnel and their families go through because he sent his own son to serve.

In “Failed the American Farmer,” a 6o-second commercial, a Pennsylvania farmer says he voted for Trump in 2016 and that he “made a mistake.” He said the past three years under Trump’s trade policies were the toughest he’s ever experienced. He said Biden is someone with compassion and a real plan.

In “American Grit,” a 30-second ad, Biden vows to support American manufacturing. He promises to impose a tax penalties on companies that avoid paying U.S. taxes by moving businesses and jobs overseas. He promises to reward companies for creating “good-paying jobs here at home.” And says he would do it with “American grit, American determination, and American union workers.”

previousSunburn — The morning read of what’s hot in Florida politics — 10.9.20