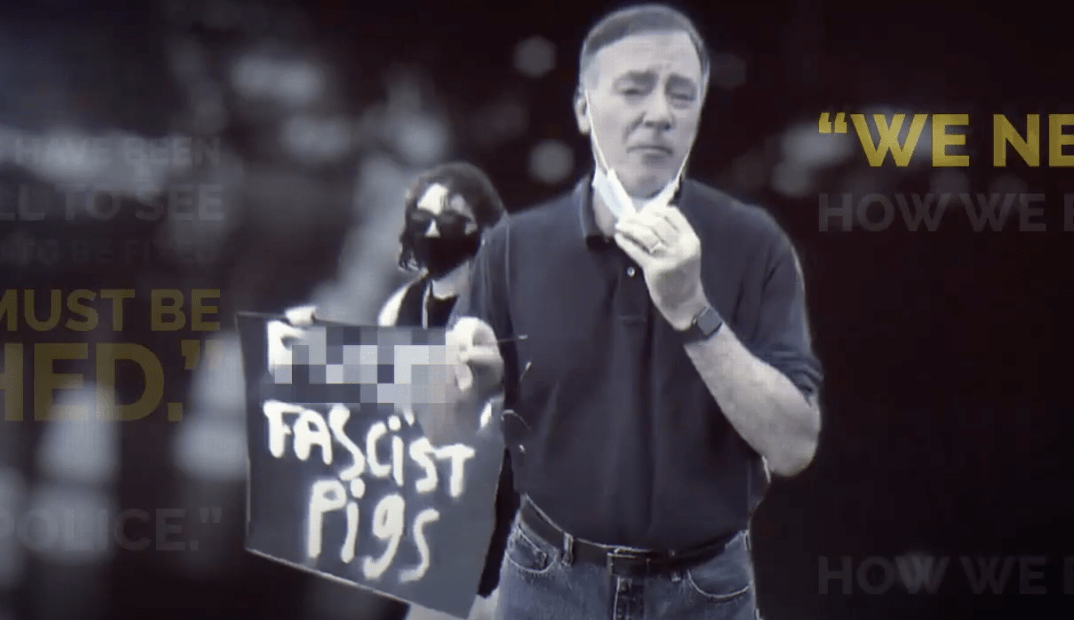 The ad claims Cohn would raise taxes and make communities less safe, but Cohn's campaign is firing back.

Scott Franklin is launching a new add attacking his opponent in Florida’s 15th Congressional District over a bevy of conservative beefs roiling elections up and down the ballot this cycle.

Franklin, a sitting Republican Lakeland City Commissioner, blasted his Democratic opponent, former investigative journalist Alan Cohn, over things like defunding the police and raising taxes — all topics sure to rile up the conservative base and which Democrats, including Cohn, have directly refuted.

At one point, the ad shows an image of Cohn removing a mask with another image behind him of a protester with a sign that reads some blurred expletive and “fascist pigs” under it. The image shows as the narrator describes Cohn as marching “with radicals.”

Cohn’s campaign fired back against the ad, specifically its imagery meant to tie him to anti-police demonstrators.

“Clearly millionaire Scott Franklin is getting desperate as we approach Election Day, by not only lying about Alan’s positions on health care and taxes, but going so far as to photoshop and alter a photo of Alan to falsely suggest he was holding an offensive sign,” Cohn campaign manager Kevin Lata said in a statement. “Voters in Florida’s 15th Congressional District deserve better than these treacherous lies.”

The original photo used in Franklin’s campaign is a screen shot from a protest, which shows Cohn on a sidewalk.

While Cohn has called for police reforms to eliminate police brutality, racial profiling and systemic racism, he has not directly called for defunding police. On the contrary, he’s directly said he does not support the concept.

That particular line is being employed in numerous conservative campaigns, with Republican candidates using it as a tool to paint Democratic rivals as would-be officials who would make communities less safe.

Meanwhile, Cohn’s campaign announced Wednesday a new endorsement from the League of Conservation Action Fund, a group that works to elect pro-environment candidates.

“Alan Cohn understands the urgency of the climate crisis and will put the safety of Florida communities over the interests of corporate polluters, listening to the experts and trusting the science,” said LCV Action Fund Senior Vice President of Government Affairs Tiernan Sittenfeld. “We are proud to support him for Congress because we know he will take bold action on the climate crisis, fight to restore the Clean Water Act and work to permanently ban offshore drilling and fracking — unlike his opponent who will continue to support Donald Trump’s toxic agenda.”

Franklin is leading in the polls. A recent poll from the Democratic Congressional Campaign Committee shows Franklin leading by three points at 42% to 39% with 19% of surveyed voters still undecided. That’s an improvement for Cohn who had been lagging seven points behind Cohn in a previous poll.

While Franklin has the lead in a slightly Republican-leaning district, Cohn’s campaign is optimistic, pointing to its own internal poll showing that when given information about Franklin’s support for President Donald Trump’s tax package, the lead shifts to a one-point advantage for Cohn.

Democrats are fighting hard for the district, which the DCCC adding Cohn to its Red to Blue program, while Republicans are fighting to keep the seat after Franklin beat incumbent Ross Spano in the GOP primary.