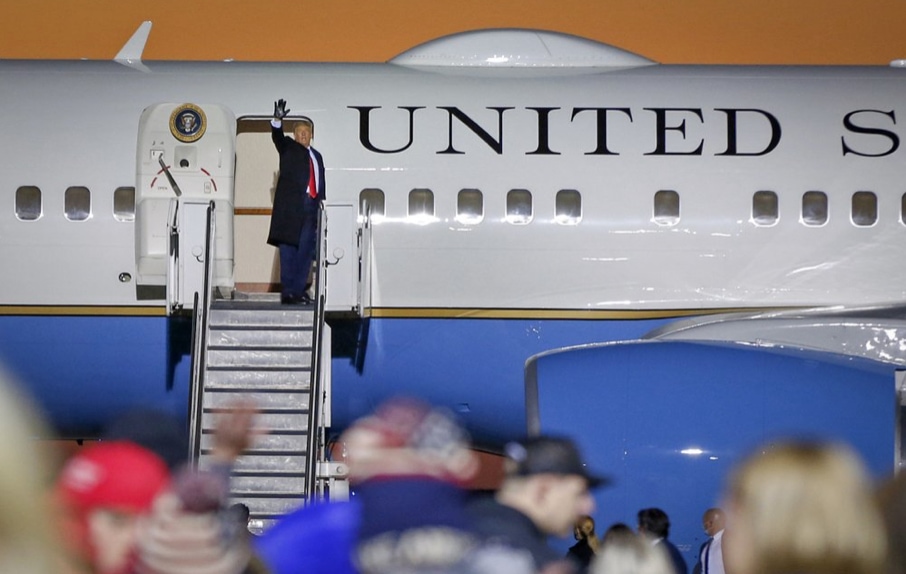 Trump likely cannot win without Florida, but Biden can.

President Donald Trump and Democratic challenger Joe Biden each has a path to the 270 Electoral College votes needed to win the White House. Biden’s is appreciably wider.

The former vice president is competitive in all the battleground states Trump carried in 2016 and has put a handful of traditional Republican states, including Georgia and Arizona, in play. That has Trump scrambling to defend a wide swath of territory and putting the incumbent’s hopes for reelection on two of the most populous swing states, Florida and Pennsylvania.

Biden can win an electoral majority most simply by carrying the three states where Trump stunned Democrat Hillary Clinton in 2016: Michigan, Pennsylvania and Wisconsin.

Those states were carried by Democrats for decades before 2016. They would give Biden 279 electoral votes, as long as he wins all the other states in Clinton’s column. Under this scenario, Biden would not need to win any other states Trump won in 2016.

The three northern industrial states have been Biden’s sharpest target for advertising dollars. He spent almost $150 million — 30% of his total national ad spending since June — in the three, according to Kantar/CMAG’s review for The Associated Press.

The fiercest struggle among the three is in Pennsylvania. Biden has had a slight advantage in most polls, while some suggest Trump remains within striking distance. Biden, who was born in Scranton, claims some favorite-son status in the state. Trump’s hopes have been boosted by Biden’s recent call for phasing out fossil fuels, though Biden has said he would not ban fracking.

If Biden loses Pennsylvania, it would require him to find 11 electoral votes elsewhere.

Once reliably Republican Arizona, offering exactly 11, and North Carolina, with 15, are states Trump won four years ago that are well within Biden’s reach.

Democrats are particularly bullish about Arizona, last carried by a Democrat in 1996. Trump won the state in 2016 by 3.5 percentage points, the smallest margin in 20 years, and this year, the Democrats’ Senate candidate, former astronaut Mark Kelly, is running a strong race.

The Arizona alternative supposes, as most of Biden’s paths do, that he also wins Nevada, last carried by a Republican in 2004. Trump has campaigned in the state, though Democrats say they are comfortable with their prospects there.

The race for North Carolina appears tighter, but there is recent precedent for a Democrat carrying the state. In 2008, Barack Obama was the first Democrat to take it in 32 years. Although he narrowly lost there in 2012, as did Clinton in 2016, waves of college-educated newcomers are swelling its booming suburbs, a boost to Biden’s chances.

Should Biden win Michigan, Pennsylvania and Wisconsin, and either Arizona and North Carolina, he would capture at least 290 electoral votes.

Biden made two stops in Georgia this past this week and on Friday had his first fall campaign visit to Iowa. He’s spent almost $5 million but hasn’t visited Iowa since the state’s caucuses in February. Biden has campaigned lightly in Ohio but has spent almost $7 million in advertising. Surveys and operatives in both parties said the two states were very close heading into the campaign’s final weekend.

Oh, and remember Florida? The perennial battleground offers 29 electoral votes and is, per usual, exceedingly close.

There’s one more big prize on the table: Texas. Democrats have been eyeing the state for years, but this is the first year in decades where it may really be within reach for the party.

The state’s new battleground status highlights not just Trump’s struggles in the suburbs, which are booming outside Texas’ major cities, but also his weaknesses in nearly every state with a diverse electorate.

“Biden has more of an opportunity to win by a larger electoral number than Trump does,” said Republican pollster Glen Bolger, who is surveying in several battleground states but not for Trump’s campaign. “It doesn’t mean Trump can’t win.”

Trump’s rally Thursday in Florida was his third campaign trip to the state this month, underscoring why Florida is so important to his reelection. He plans to return before Tuesday’s election.

His stop Thursday was in swing-voting Hillsborough County, where Clinton beat him by about 41,000 votes. Hillsborough is next to — and shares a media market with — Pinellas County, the most populous county in the state to flip from Democratic in 2012 to Republican in 2016.

Trump won some counties in the surrounding area by more than 60% of the vote, and his campaign hopes it can further run up the score with first-time and less regular voters in these places.

Even if Trump nets Florida and holds battlegrounds he won in the South and Southwest, he would still be short of 270 electoral votes.

The president is wagering much on Pennsylvania as the best chance of moving within striking distance of that threshold. After a trio of rallies this past week, Trump was set to hold four more in the state on Saturday.

He’s been making stops across Pennsylvania, from counties outside Philadelphia, the largest metro area, to the rural northwest corner of the state.

Among his upcoming stops: Bucks County. It was once Philadelphia’s most GOP-heavy suburb but has been trending Democratic and is an example of the obstacles Trump is facing. He lost the county by less than 2 percentage points in 2016 and has seen his standing in the suburbs steadily erode since then.

Trump’s argument to Pennsylvania voters was recharged after Biden, during their Oct. 22 debate, called for phasing out fossil fuels. That created an opportunity for Trump in a state with a robust natural gas industry.

“Biden’s plan to abolish the entire U.S. oil industry — you saw that?” Trump noted at a rally last week in Lansing, Michigan, recalling Biden’s call for phasing renewable fuels in and fossil fuels out over time. “Will cripple our nation and send us into an absolute deep depression.”

Even if Trump wins Florida and Pennsylvania, he would still be short of the magic number if he can’t carry most of the states he won in 2016.

He could nose ahead in Ohio, long one of his strongest states, but would still need to cobble together a series of states he won in 2016, such as Iowa, and some he lost narrowly and continues to trail.

That more complicated path would include flipping Minnesota, Nevada and New Hampshire. That, however, would defy political logic for an incumbent to lose in places won four years ago and win in places lost back then.

Grasping for every vote he can, Trump has even campaigned in Maine and Nebraska, where electoral votes are awarded by congressional district and to the overall state winner. A week ago, Trump was in Levant, Maine, near the hub of the state’s GOP leaning north, Bangor, hoping to hold the single electoral vote in its 2nd District, and in Omaha, Nebraska, on Tuesday, hoping to hold that metropolitan district’s single vote.