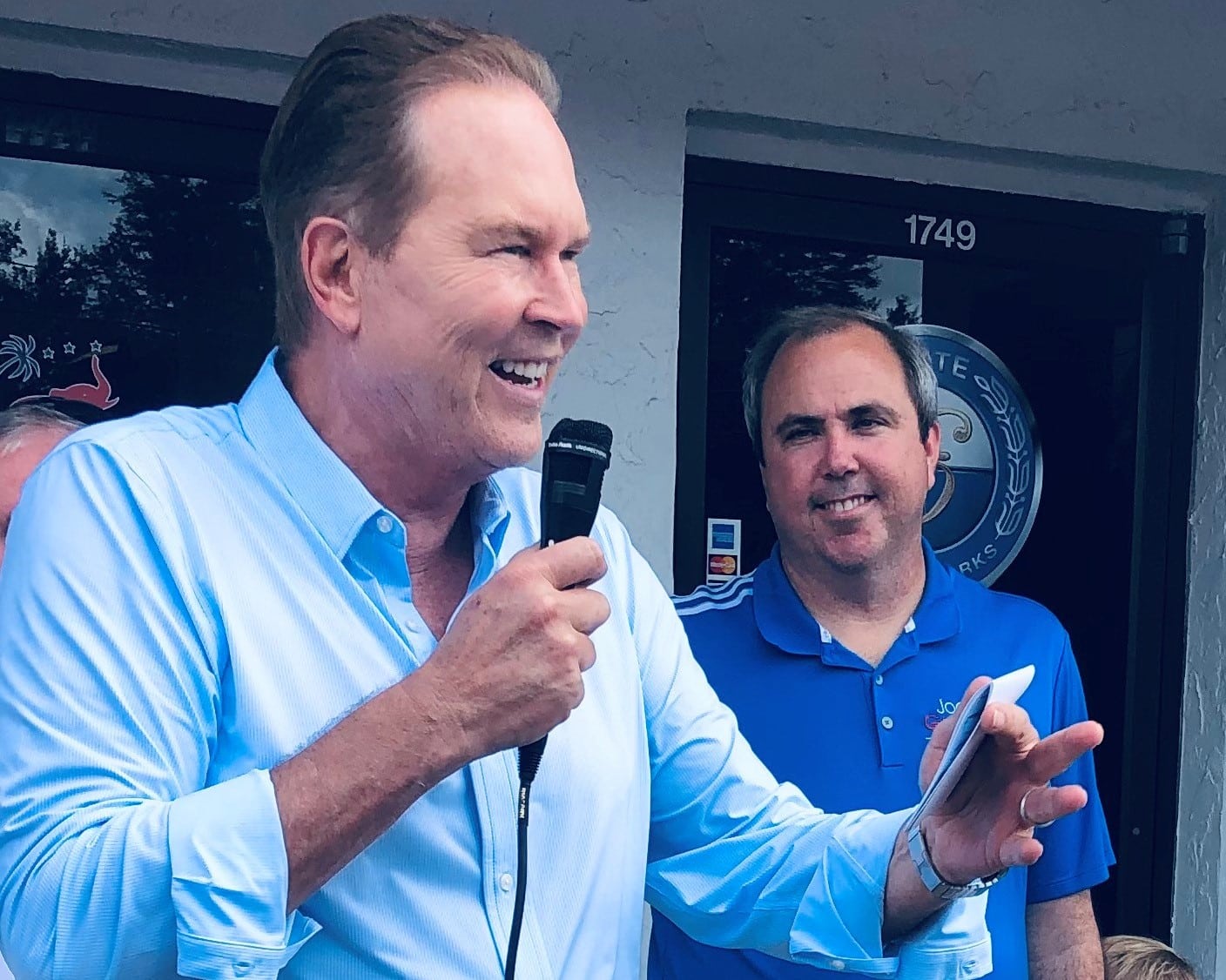 The region remains a hotbed of political activity heading into the new year.

Southwest Florida has always boasted its own strident politics. The region this year hosted Florida’s most expensive Congressional primary, one of its hottest statehouse contests and saw redistricting norms turned on the ear — all as leaders waded the pandemic-tinged morass of 2020. So who drove the news in the contentious election cycle? Here’s the top 10 newsmakers of the region, in alphabetical order.

Through 14 years in Congress, the Longboat Key Republican has always been more workhorse than show horse. After arriving into office after a contested 2006 election where he won by a mere 369 votes, he’s also never fully escaped the notice of Washington Democrats certain Florida’s 16th Congressional District remains a battleground. He fended off his best-funded challenger yet this year as state lawmaker Margaret Good took up the Democratic banner. But Buchanan turned on a reliably efficient campaign machine that kept his opponent on defense while amplifying his record of achievement in the House. With a foundation message about 22 measures introduced that became law — half of those while Democrat Barack Obama was President — the incumbent made a double-digit victory look easy even as national pundits labeled the race one of Florida’s hottest contests. Now he returns to Washington with a plum spot on the Ways and Means Committee, a co-chairmanship of Florida’s Congressional Delegation, and reason to believe the Florida Legislature will make his next go at office a little easier post-redistricting.

Two years after losing a razor-thin contest for Agriculture Commissioner, the former state lawmaker found his way back into public office as Lee County’s new Property Appraiser. But while that election seemed a foregone conclusion — he faced only write-in opposition in the General Election in the deep red region — he also unseated Republican State Committeeman Chris Crowley the same day and increased his voice in GOP politics substantially. That gives the Lehigh Acres Republican a platform to run for state chair, now or in the future. It’s a prospect that crossed many a mind when he put out a manifesto demanding a different approach to mid-terms, especially when that Agriculture Commissioner post pops back up in 2022. One thing that needs to change, by Caldwell’s reckoning? There needs be a much stronger friendship between the Governor’s mansion and state party. And it looks like he’s not afraid to make some enemies to make that point.

Though her name didn’t appear on any ballot, the Democratic Environmental Caucus of Florida president had plenty at stake on the ballot. The Lee County Democrat played a greater role than anyone in Florida in recruiting Democrats to file in nearly every state legislative race on the ballot. Christensen’s strategy of running Democrats didn’t result in any flipped seats, though the chief goal always seemed to be driving Democratic turnout. Now, Christensen wants to run the Florida Democratic Party, where she believes a focus on candidate support can reset progressives’ focus after a dismal cycle. And one important result of leading Team Little Guy in 2020 was the development of a network of activist-candidates who owe more to Christensen than they do to anyone in the consultant class. She’s still an underdog for the party post compared to former Miami Mayor Manny Diaz, but has quickly ascended to be a statewide political player in a short time.

News that U.S. Rep. Francis Rooney would retire unleashed a wave of Republican candidates. Sophomore state legislator Donalds, though, was the one to emerge from the field. Ultimately coming out on top in a nine-person primary with 22.6% of the vote, he bested fellow lawmaker Dane Eagle by a mere 774 votes out of 103,915 cast. His victorious field operation received a significant lift when Donalds landed the support of the conservative Club For Growth, which invested millions into Florida’s 19th Congressional District. Donalds coasted through the General Election over Democrat Cindy Banyai and will head to Washington as one of few Black members within the House Republican caucus. He’s also become a fixture on Fox News as part of the so-called Freedom Force, a group of conservative freshman promising to fight socialism in the Democrat-led chamber. You can also count on Donalds to be a major voice for school choice and education reform, while also bringing a network of support among conservative advocates for criminal justice reform.

The Cape Coral Republican didn’t punch a ticket to Washington as he’d hoped to do this year, but he still managed to leave the race in Florida’s 19th Congressional District looking like a winner. Shortly after the Republican primary, Gov. Ron DeSantis tapped Eagle as the new leader for the Department of Economic Opportunity. While always a position of notoriety, Eagle took the reins during unprecedented challenges for the agency as it rebuilds an unemployment system that crumbled under the pressure of claims driven to record heights by the pandemic. The hire brought to a close a nearly eight-year stint in the House, where Eagle rose to the position of Republican Majority Leader. That his time in leadership, which included passage of major education reforms and record investment in Everglades restoration and regional water projects, seems a footnote on 2020 shows just what a raucous year it’s been for Eagle, who also saw his first child, Ronin, arrive this year.

The Sarasota Democrat started the year with a reputation as one of the state party’s brightest stars. She left it having lost one of Florida’s most watched Congressional contests. In part a victim of incumbent Republican Buchanan’s incredible opposition research operation, she took a drubbing in the press as past votes fed negative coverage, most notably when it came out she cast the only vote (apparently mistakenly) in the Florida Legislature against a childlike sex doll ban. But it may be wise not to write off Good. She did raise nearly $3.5 million, a record amount for a challenge against Buchanan, even greater than the $3.1 million raised by Democrat Christine Jennings in 2006 when the Sarasota area seat was open. Many at the close of the election questioned Good’s decision not to seek reelection to her state House District 72 seat, though after Republicans flipped five House seats including that one, it’s not foregone Good would have won reelection there. But one certainty in politics is there’s always another election two years away. The question may be what office Good seeks then.

Balancing the dual identities of collegial Senator and Donald Trump’s most reliable surrogate can be taxing, but this accountant knows how to work the numbers. In the weeks leading into the General Election, the Republican Party of Florida chair could be spotted in every corner of the state, driving golf carts through the Villages or getting name-dropped by the President onstage at South Florida rallies. The result? Trump lost reelection but won Florida, one of just three states where the President improved his lead compared to his 2016 performance. Most credit Gruters with the success, enough so a once-uncertain second term as state chair now seems a foregone conclusion. Meanwhile, the Sarasota Republican easily disposed of a challenge to his own reelection to the Senate back at home. Since then, he led the Electoral College in casting its votes in Tallahassee, including participating himself for the second time, and he has served as a cheerleader for the President as he continues to challenge Joe Biden’s national win. Just when electioneering seemed done, Senate runoffs in neighboring Georgia brought Gruters attention to the Peach State. Next on the plate? Chairing the Education Committee. He also wants to convince Florida to charge online sales tax at the point of sale after a year when online commerce spiked.

The question at the start of the election cycle when McFarland’s name first entered political conversation was most frequently “Who’s Fiona McFarland?” But it didn’t take long for the Naval reservist to introduce herself to the region and make clear she was a force ready to be unleashed. The daughter of President Trump’s first deputy national security advisor, McFarland tapped into a national fundraising network as she ran for a statehouse seat in swingy House District 72. She was originally prepared to challenge Good, who stepped down from reelection in 2019 to challenge Buchanan. She ended up defeating long-time elected office holder Donna Barcomb in a sometimes bitter Republican primary, then rallied the divided party back together again to defeat Democrat Drake Buckman and flip HD 72 red. That victory proved sweet revenge to Republicans, who lost the seat in 2018 in a nationally watched Special Election. But with amicability and smiles, McFarland won with a mandate for common sense solutions. The young mother now heads to Tallahassee tasked with an appointment to a committee on pandemic and emergency response.

A master of Tallahassee politics in the bubble, Rodrigues started 2020 as the unstoppable force ascending into an open Senate District 27 seat. The path wasn’t quite as clear as expected, with fellow House member Heather Fitzenhagen making a last-minute entry into a Senate primary. Rodrigues’ response was to raze the earth, with a significant assist from the Florida Republican Senatorial Campaign Committee. He ended up handily winning the primary and on Election Day in the heavily Republican district. He’s also among those Florida lawmakers to survive a bout with COVID-19, one that left him hospitalized for the day of his swearing in. But not long after, the Estero Republican was back on his feet and stepping in during the Electoral College vote for one of those individuals who couldn’t make it because of health concerns. Now it’s time for the former House Majority Leader to make his way through the upper chamber, where he arrives with a rolodex of state lobbyists already familiar with his nameplate.

When close friend Gruters landed in the role of Republican Party of Florida chair last year, Ziegler was cut off from a position he coveted for years. But he’s more than made the most of it. The Sarasota County Commissioner won the Vice Chair post for the state party and has worked as closely with Gruters as any No. 2 in memory. That became most clear as he rode shotgun with Gruters on a massive door-to-door ground effort leading into the November election. He also has played a more behind-the-scenes role revolutionizing digital outreach for Republican campaigns in Florida and beyond. Back home, a controversial redistricting effort by the county commission that Ziegler opposed left his future in public office uncertain, though nothing stops the county from going through reapportionment again. Indeed, there’s a better argument to draw new lines after the Census than there was to do so in 2019, so Ziegler may yet come out ahead. Regardless, he’s positioned now as a solid successor to Gruters whenever the current state chair feels like stepping down.

previous'It's not too late': Florida Democrats plead with Rick Scott to back bigger virus relief payouts