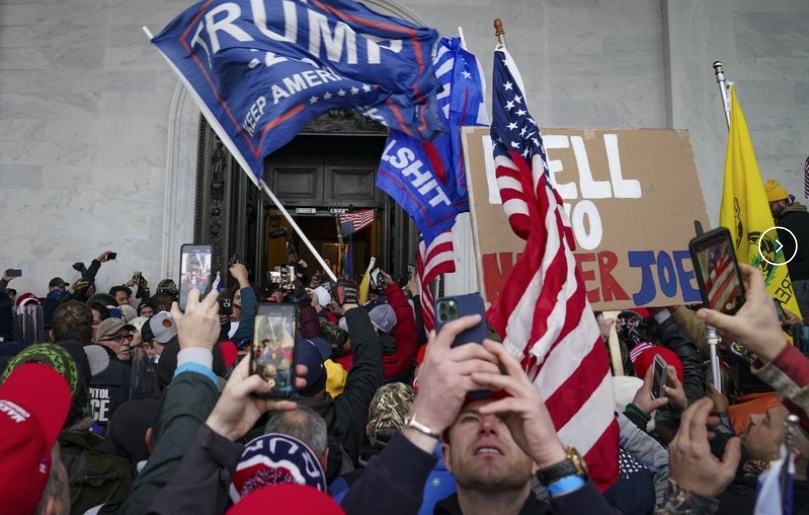 When a selfie culture tries a terrorist insurrection.

One of the defining images of the Capitol siege was of a man dangling from the balcony of the Senate chamber. Clad in black and with a helmet over his head, he might have been hard to identify even after he paused to sit in a leather chair at the top of the Senate dais and hold up a fist.

But Josiah Colt made it easy. He posted a video to his Facebook page moments later, bragging about being the first to reach the chamber floor and sit in Nancy’s Pelosi’s chair (he was wrong). He used a slur to describe Pelosi and called her “a traitor.”

A little later, the 34-year-old from Boise, Idaho, posted again. This time, he sounded more anxious. “I don’t know what to do,” Colt said in a video he’d soon delete but not before it was cached online. “I’m in downtown D.C. I’m all over the news now.”

Turned out, the revolution was televised after all, or at least the ugly attempt at one made Wednesday by Donald Trump supporters. Since many were part of the selfie culture, they couldn’t resist sharing their activities with the world, and therefore providing evidence to law enforcement investigators and prosecutors.

Colt was far from the only one documenting the insurrection from within last Wednesday in Washington. Many in the mob that ransacked the Capitol did so while live-streaming, posting on Facebook and taking selfies, turning the seat of American lawmaking into a theater of real-time — and often strikingly ugly and violent — far-right propaganda.

“This extremist loop feeds itself. The folks who are watching and commenting and encouraging and sometimes giving some cash are supporting the individual on the ground. And he’s supporting their fantasies,” says Oren Segal, vice president of the Anti-Defamation League’s Center on Extremism.

“Selfie culture,” Segal says, “has become so much part of the norm that it’s almost second nature when you’re carrying out a terrorist insurrection.”

Taken together, the fragmented feeds from Wednesday’s incursion form a tableau of an ill-conceived insurrection — as full of “I was here” posturing for social media as of ideological revolution — and one that was given far more latitude than most peaceful Black Lives Matters protests were in 2020. In hundreds of images, the fallacy of a far-right brand of “patriotism” was laid bare.

The modern Capitol had previously been besieged before only in Hollywood fiction. Marauding aliens in “Mars Attacks!” Ensnarling ivy in “Logan’s Run.” Blown to bits in “Independence Day.” But the imagery of last week’s siege offered something far more banal if no less chilling: a warped cinema verité of right-wing extremism with waving Confederate flags and white-power poses in Capitol halls.

Though many involved Wednesday in Washington were Trump supporters without designs on violence, the visuals illustrate that some were clearly there to summon mayhem if not outright bloodshed. The call to the Capitol drew many of the right’s extremist factions — some of whom helped lead the charge.

The white nationalist Tim Gionet, known online as “Baked Alaska” and a participant in the “Unite the Right” rally at Charlottesville, streamed live from congressional offices, gleefully documenting the break-in for more than 15,000 viewers on the streaming platform Dlive. The service, ostensibly for gamers, has grown into an attractive tool for white nationalists. Nick Fuentes, a leader of the white supremacist “Groyper Army,” streamed on Dlive from outside the Capitol. He later tweeted that the siege was “awesome.”

Journalists documenting the chaos, and in some cases suffering attacks from violent protesters, captured the storming of the Capitol. But the pervasive self-documentation of the rioters told another story: the on-the-ground culmination of an online alternative reality fueled by QAnon conspiracies, false claims of fraud in the election and Trump’s own rhetoric.

“In their minds they had impunity. I’m having trouble understanding how these people could believe that. At the same time, I can see that it’s of a piece with the Trump family,” says Larry Rosenthal, chair of the Berkeley Center for Right-Wing Studies and author of the upcoming “Empire of Resentment: Populism’s Toxic Embrace of Nationalism.”

“They’re going to be prosecuted,” he says of those involved, and “they have provided the evidence.”

Federal law enforcement officials have pledged an exhaustive investigation into the rampage that left five people dead, including Capitol Police officer Brian D. Sicknick. They are relying in part on the social media trail many left behind. “The goal here is to identify people and get them,” Ken Kohl, the top deputy federal prosecutor in Washington, told reporters Friday.

Among those arrested so far is Richard Barnett, who was photographed sitting in Pelosi’s office with his feet on her desk. Outside the Capitol, he proudly clutched mail he said belonged to Pelosi. The 60-year-old Barnett, from Gravette, Arkansas, faces up to a year in federal prison for three charges including theft of public property.

Also arrested was Derrick Evans, a newly elected Republican from Delaware, who had posted video on social media of himself clamoring at the Capitol door. “We’re in! Keep it moving, baby!” Evans shouted in a packed doorway ofTrump supporters. Inside the Capitol, he chanted: “Our house! Our house!”

Evans deleted the videos, but federal prosecutors said they found them on Reddit. If convicted, he faces up to 1 1/2 years in federal prison for two misdemeanors: entering a restricted area and disorderly conduct.

Others have been fired for participating in the mob. The Texas company Goosehead Insurance fired its associate general counsel, Paul Davis, after he posted an Instagram video complaining about being tear-gassed while trying to break into the Capitol. Maryland’s Navistar Direct Marketing said it fired an employee who was seen inside the Capitol. He hasn’t been identified, but photographs showed a man with an easily visible employee badge from the company around his neck.

Colt landed on the Senate floor; despite his remarks, photos suggested he had actually sat in a chair reserved for Vice President Mike Pence, who is president of the Senate. Colt issued an apology begging forgiveness for his prominent role. “In the moment I thought I was doing the right thing,” he said.

Jessie Daniels, a professor of sociology at Hunter College whose books include “Cyber Racism: White Supremacy Online and the New Attack on Civil Rights,” expects many of the images from the Capitol breach will reverberate online as far-right propaganda. The woman who died trying to break through a Capitol door, Ashli Babbitt, will be made a martyr.

“She’s going to be on all the posters, trying to get people radicalized,” Daniels says.

For those who have been tracking and researching how the far right operates online, the live streams of well-known activists like Gionet were especially telling. Gionet streamed Wednesday from within the Capitol, interacting with his followers as he went. When the number of viewers ticked over 10,000, he cheered, “Shoutout to Germany!”

Inside congressional offices, Gionet, who has been banned from Twitter and YouTube, filmed himself making a mock phone call to the Senate. “Yeah, we need to get our boy, Donald J. Trump, into office,” he said. One user cautioned him about leaving fingerprints on the phone.

Gionet profited by his exploits. Megan Squire, a professor of computer science at Elon University who has studied Dlive, estimates Gionet made $2,000 in donations while inside the Capitol.

Scrutiny has intensified on the role social media platforms like Facebook and Twitter, which both suspended Trump in the days following the riot. For those who have tracked far-right fringes, a reckoning for social media in its role in giving extremists platforms is long overdue. Before the Capitol siege, Squire had observed no mechanism for reporting questionable content on Dlive. “Their approach to content modulation is basically nonexistent, which is why these guys love to be there,” she said.

On Saturday, after mounting pressure, Dlive suspended several accounts, including those of Gionet and Fuentes, saying they were “found to be inciting violent and illegal activities.”

Following neo-Fascists from one platform to another, some have said, is an inevitably helpless game of catch-up. Daniels disagrees.

“There’s a lot of evidence that deplatforming people who are harmful from these platforms is effective,” Daniels says. “The pushback from tech people is that it’s whack-a-mole, that if they’re not here, they’ll go somewhere else. Fine. Let’s play whack-a-mole. Let’s do this. Let’s chase them off of every platform until they go away.”