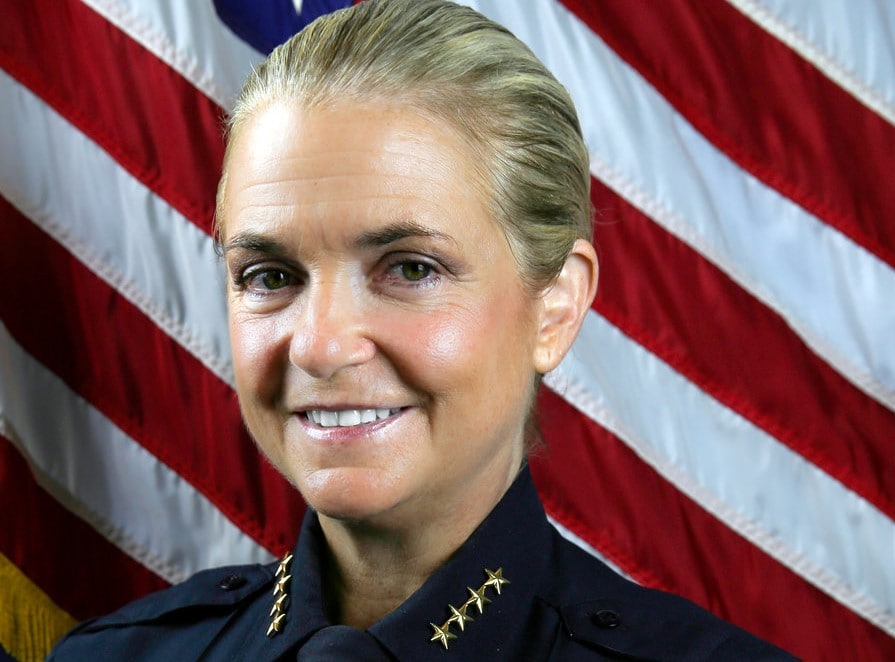 Bernadette DiPino had come under fire for an insensitive joke about a homeless man.

Sarasota Police Chief Bernadette DiPino has submitted her resignation effective Friday at 5 p.m. The departure of the city’s first female police chief came after a complaint had been filed saying she joked about tasing a homeless man outside the opera.

City Manager Marlon Brown announced he had accepted the chief’s resignation and would begin the process of finding a replacement.

“I’d like to express my sincere thanks to the chief for her eight years of service to the City of Sarasota,” Brown said. “Through her leadership and dedicated efforts with community policing she helped reduce crime by nearly 40% and strengthened trust between residents and officers through extensive community outreach initiatives from the Citizens Police Academy to Coffee with a Cop and family movie nights on the SPD lawn.  SPD has many initiatives ahead, including the implementation of body worn cameras, and I will immediately begin the process of appointing an interim chief of police.”

“It’s been my privilege to serve as the Chief of Police for the City of Sarasota. I am proud of my 35 years of honorable service as a law enforcement officer. We have accomplished so much in the last eight years. I am proud of the hard work and dedication of our civilian and sworn staff. Being a fourth-generation law enforcement officer, I am looking forward to the opportunity to continue to serve the law enforcement field in another capacity. I have made many friends and developed so many positive relationships here in Sarasota, it will be hard to say goodbye … I believe I am leaving the Sarasota Police Department in good standing for the next chief. This has been a bittersweet decision, but I know the men and women of the Sarasota Police Department will continue to keep the City of Sarasota a safe place to live, work, and play.”

On Dec. 30, the city received an anonymous complaint detailing a November incident in which a homeless man with known mental health challenges showed up on bicycle at an outdoor musical performance and began mocking singers and police officers, according to ABC 7.

“While walking into the building and in front of at least a half dozen officers the chief of police ask the group if she could borrow someone’s taser, motioning to the mentally handicapped individual,” the complaint alleges.

DiPino earlier this week acknowledged as much in a letter to officers.

“As I was walking towards the building I looked at the officers and I saw on their faces and I knew what I was feeling, that this was just more disrespectful treatment during a year filled with some horrible things being said about Police,” she said. She made the comment about using a taser as a joke, and most received it as such, DiPino wrote.

“Upon reflection I wish I would have just told the officers how sorry I was that they had to experience this type of disrespect. For me this incident is a stark reminder that as the police chief and a leader I must use and choose my words carefully,” she continued.

“Chief DiPino has been a devoted public servant to this city, and we appreciate her many contributions to the safety and wellbeing of our community,” he said. “We wish her the best on her future endeavors.”

previousJoe Henderson: When the Super Bowl begins in Tampa, drink a toast to Tom McEwen