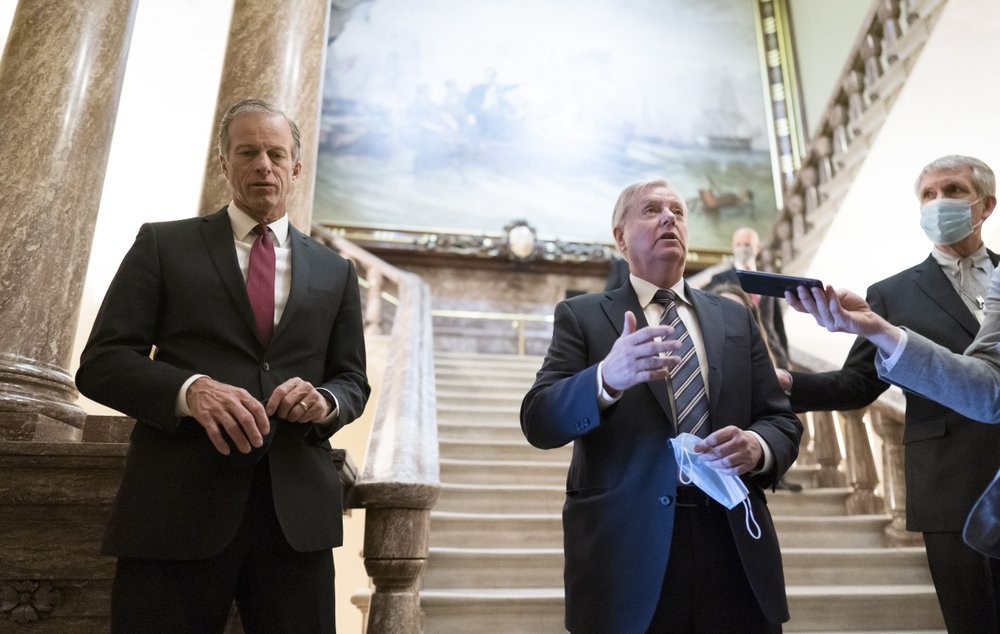 Nearly 10 million jobs have been lost and some 11 million households face evictions.

Republicans have one goal for President Joe Biden’s $1.9 trillion COVID-19 relief package: erode public support for the rescue plan by portraying it as too big, too bloated and too much wasteful public spending for a pandemic that’s almost over.

Senate Republicans prepared Saturday to vote lockstep against the relief bill, taking the calculated political risk that Americans will sour on the big-dollar spending for vaccination distribution, unemployment benefits, money for the states and other outlays as unnecessary, once they learn all the details.

Reviving a page from their 2009 takedown of President Barack Obama’s costly recovery from the financial crisis, they expect their opposition will pay political rewards, much like the earlier effort contributed to the House Republicans’ rise to power.

It’s a tested strategy but comes at an uncertain, volatile time for the nation. Americans are experiencing flickers of optimism at the one-year anniversary of the deadly outbreak as more people are vaccinated. But new strains of the virus and a still shaky economy could unleash another devastating cycle of infections, lockdowns and deaths. More than 500,000 Americans have died.

So far, public support for Biden’s approach to the pandemic is high. Overall, 70% of Americans back the Democratic president’s handling of the virus response, including 44% of Republicans, according to a new poll from The Associated Press-NORC Center for Public Affairs Research.

Biden and Democrats warn that now is not the time to let up on aid, and that it’s better to risk doing too much than too little. They say the costs of paring back the rescue risk stalling out the economic recovery, as many believe happened in 2009.

“When the house is in flames, you don’t argue about how much of the fire to put out,” said Washington Democrat Sen. Patty Murray during Friday’s session.

“You do whatever it takes until the crisis is over,” she said. “And you do it as fast as you can.”

The debate in Congress reflects a fundamental divide in the country over how to contain and crush the pandemic and get the nation back to normal.

Nearly 10 million jobs have been lost and some 11 million households face evictions. While Democratic leaders generally side with health professionals supporting social distancing restrictions and easing into school and workplace reopenings, congressional Republicans have been more eager to conduct business as close to usual as possible.

The U.S. is not alone in confronting the daunting dilemma that holds serious ramifications about the size and scope of aid that’s needed to prevent further economic catastrophe.

Senate Republican leader Mitch McConnell, who is leading his minority party toward the “no” vote, said Biden’s 628-page bill is a Democratic “wish list” doesn’t meet the moment because the pandemic is lifting and the economy is ready for a “roaring recovery.”

“We are already on track to bounce back from the crisis,” he said.

Republicans argue Congress has already approved historic sums to counter the pandemic and worry the big spending will overheat the economy, spiking inflationary fears, though economists are mixed on those concerns. They have an opening with voters who the polling shows are skeptical of Biden’s handling of the economy.

McConnell expressed similar optimism last spring when he hit “pause” on new spending after approval of the initial round of aid. Around that time, then-President Donald Trump pledged that Americans would be all but back to normal by Easter Sunday.

But as Texas announced this past week it would seek to end face-mask wearing requirements, one of the key strategies public health officials say helps stop the spread of the virus, familiar political fault-lines and anxieties are resurfacing. Texas was among the first states to reopen in May, loosening restrictions at the start of the pandemic’s second wave that coursed through summer.

Jason Furman, the former chairman of Obama’s Council of Economic Advisers who now teaches at Harvard, agrees that parts of Biden’s package are too big, suggesting the $350 billion to states and cities could be reduced or have stricter guardrails against waste. But he said the bigger economic danger is in not doing enough.

Vaccines alone are not enough to ensure a healthy economy, he said. Households are struggling and businesses are confronting changing consumer habits and spending. The Biden package offers $1,400 direct payments to individuals, phased out for those earning $80,000 a year.

“If you add up the financial needs of households and the shortfalls facing states the American Rescue Plan overfills these,” he said by email. “But no legislation is perfect and, as I said, if the downside is families get a little more money in one particular year that is much less bad than if Congress fails to act.”

As Biden embarked on a go-it-alone partisan strategy, relying on Democratic votes for passage, Republicans are in fighting mode.

Senate Republicans forced an all-night reading of the bill Thursday, delaying the start of debate.

On Friday, senators launched an overnight session on amendments, most from Republicans, designed in part to change the bill, but also to highlight costly expenditures and less popular provisions. By early Saturday, most were failing.

Democrats’ own amendment, to reduce extra jobless benefits from $400 a week to $300, was splitting their ranks and causing further delays, before it eventually was accepted.

“The human mind can’t really contemplate what a trillion is,” he said, before launching into examples. He suggested a stack of $1 bills would extend the distance half way to the moon.

GOP Sen. Mike Braun of Indiana said by the time they’re done they hope to turn public opinion around.

“We’re going to expose every ugly detail of it,” he said.

The White House is well aware of the challenges ahead. Many of Biden’s staff members are veterans of the 2009 battles.

Press secretary Jen Psaki said Friday that at the time they didn’t do enough to explain to the American people the benefits in ways “that people would be talking about at their dinner tables.”

Republished with permission from The Associated Press.
Post Views: 949

previousReport scrutinizes social media posts of Matt Gaetz, others ahead of Capitol riot