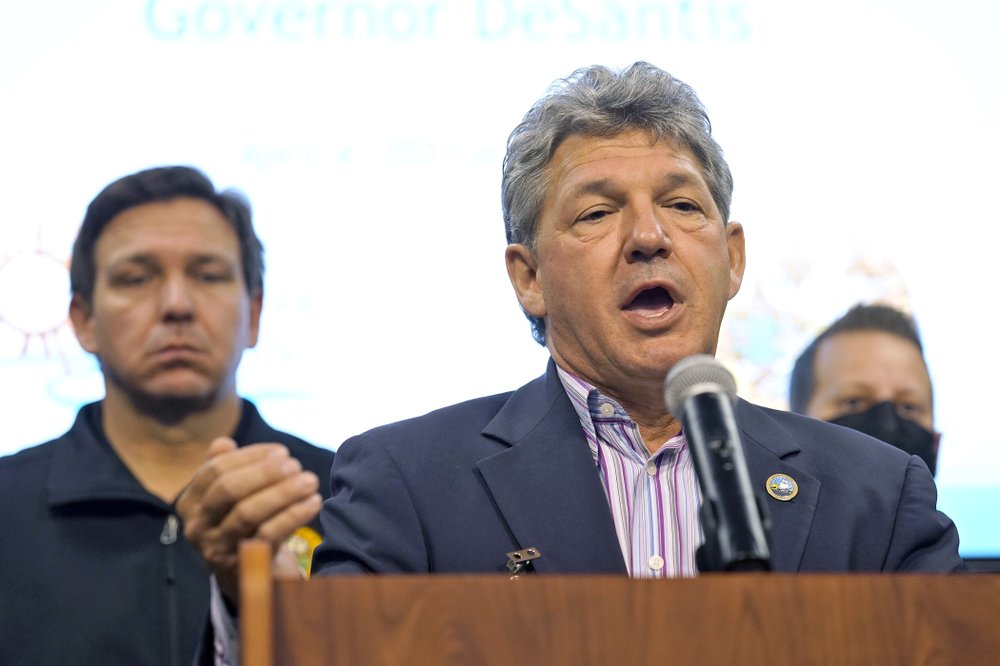 The pressure has lightened as officials pump tens of thousands of gallons into Tampa Bay.

Florida Gov. Ron DeSantis said Sunday that crews are working to prevent the collapse of a large wastewater pond in the Tampa Bay area while evacuating the area to avoid a “catastrophic flood.”

Manatee County officials say the latest models show that a breach at the old phosphate plant reservoir has the potential to gush out 340 million gallons of water in a matter of minutes, risking a 20-foot-high wall of water.

“What we are looking at now is trying to prevent and respond to, if need be, a real catastrophic flood situation,” DeSantis said at a press conference after flying over the old Piney Point phosphate mine.

Authorities have closed off portions of U.S. Highway 41 and ordered evacuations of 316 homes. Some families were placed in local hotels. 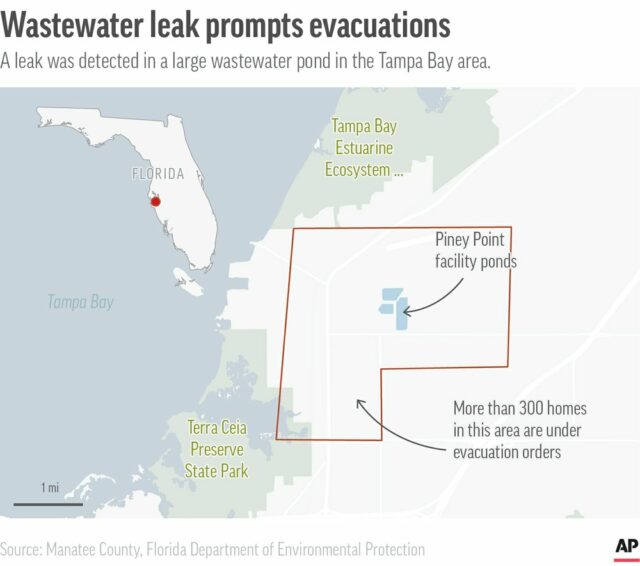 Manatee County Sheriff’s officials began evacuating about 345 inmates from the first floor a local jail about 1 mile away from the 77-acre pond on Sunday afternoon. Manatee County Administrator Scott Hopes said models show the area could be covered with 1-5 feet of water, and the second floor is 10 feet above ground.

Officials first announced they would move people and staff to the second story and put sandbags on the ground floor, but Sheriff Rick Wells later said moving all the inmates to the second floor posed a security risk.

County officials say well water remains unaffected and there is no threat to Lake Manatee, the area’s primary source of drinking water.

The Florida Department of Environmental Protection says the water in the pond is primarily salt water mixed with wastewater and storm water. It has elevated levels of phosphorous and nitrogen and is acidic, but not expected to be toxic, the agency says.

Crews have been discharging water since the pond began leaking in March. On Friday, a significant leak that was detected escalated the response and prompted the first evacuations and a declaration of a state of emergency on Saturday. A portion of the containment wall in the reservoir shifted, leading officials to think a collapse could occur at any time.

Hopes, the county administrator, said Sunday that with new state resources, crews will be nearly doubling the amount of water being pumped out of the pond and taken to Port Manatee. Currently about 22,000 gallons of water are being discharged per minute, and Hopes said he expects the risk of collapse to decrease by Tuesday.

Early Sunday, officials saw an increase of water leaking out, but Hopes says it seems to have plateaued. The water running out on its own is going to Piney Point creek and into Cockroach Bay, an aquatic preserve in Tampa Bay north of the facility.

“Looking at the water that has been removed and the somewhat stability of the current breach, I think the team is much more comfortable today than we were yesterday,” he said. “We are not out of the critical area yet.”

Hopes said he could not rule out that a full breach could destabilize the walls of the other ponds at the Piney Point site.

“The radiologicals are still below surface water discharge standards. So, again this is not water we want to see leaving the site,” he said.

Officials said the federal Environmental Protection Agency is sending a representative to be at the command center in Manatee County. The agency did not immediately respond to a request for comment.

Calls to the owner of the site, HRK Holdings, for comment went unanswered Saturday and Sunday.

The ponds sit in stacks of phosphogypsum, a solid radioactive byproduct from manufacturing fertilizer. State authorities say the water in the breached pond is not radioactive.

But the EPA says too much nitrogen in the wastewater causes algae to grow faster, leading to fish kills. Some algal blooms can also harm humans who come into contact with polluted waters, or eat tainted fish.

Environmental groups urged the federal government this weekend to step in to halt sending more wastewater to the existing gypsum stacks and halting the creation of more phosphogypsum, which is left behind when phosphate rock is mined to produce fertilizer.

“We hope the contamination is not as bad as we fear, but are preparing for significant damage to Tampa Bay and the communities that rely on this precious resource,” Justin Bloom, founder of the Sarasota-based nonprofit organization Suncoast Waterkeeper, said in a statement.

previousSeetha Raghavan: When flying is truly out of this world