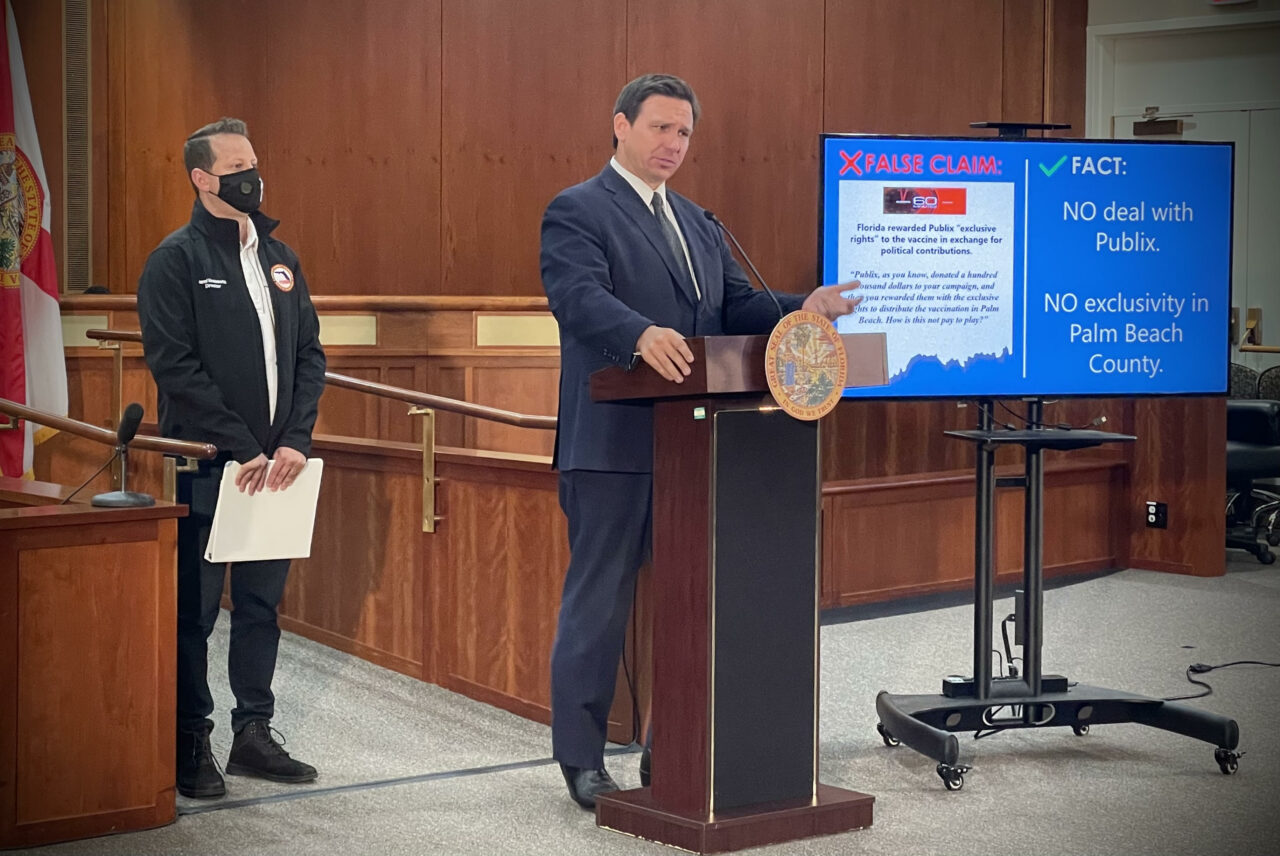 The Governor said of naysayers, he'd 'hit ‘em back right between the eyes.'

Gov. Ron DeSantis called in back-up as he took another lap to defend himself against a heavily criticized 60 Minutes segment that implied a pay-to-play scheme in the state’s vaccine rollout.

“This is one of the biggest face-plants of corporate media,” DeSantis said.

In a visual presentation to media called “FACTS VS. SMEARS”, DeSantis laid out his case against the CBS report, this time with Division of Emergency Management head Jared Moskowitz, a Democrat, by his side.

The detailed presentation amped up the Governor’s rebuttal, as did his use of the word “malicious” to describe the report. When the Governor’s spokeswoman was asked after the press conference if DeSantis planned to take legal action against the news magazine show, she said simply, “stay tuned.”

The story, which aired Sunday, tied Publix’s $100,000 donation to the Governor’s campaign to the state’s vaccine rollout. The Governor selected Publix as the main distributor of vaccines in Palm Beach County in late January.

DeSantis contends other pharmacies were helping the state in other ways, but were not ready for a large-scale vaccine rollout like Publix.

At the press conference, Moskowitz reiterated previous statements he has made that the news story is false, which he said he told to 60 Minutes producers prior to the segment airing.

“It’s verifiably false because I know that decision was made in my office. I’m the one making the phone call, and I tried to go to Walmart first. So, the whole Publix pay-to-play thing is garbage,” Moskowitz said.

Publix called the notion that it received special access “absolutely false and offensive.”

CBS issued a statement standing by its report.

The Governor maintained the state has made an “impressive” vaccination effort.

“If they’re going to come down here and smear our efforts, or smear me, or smear great companies in my state, I’m going to hit ‘em back right between the eyes here,” DeSantis said.

After the press conference the Governor’s spokeswoman said DeSantis was vaccinated yesterday, but she declined to give any further details.