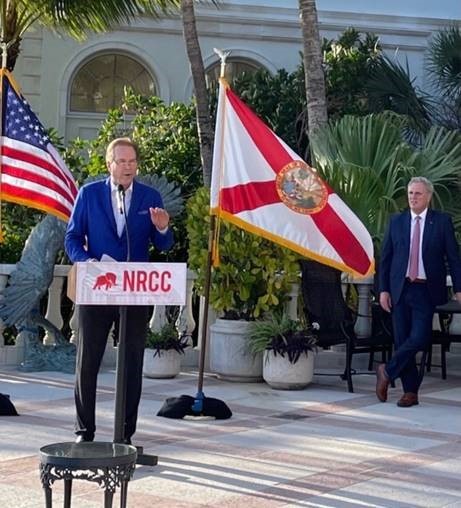 A fundraiser in Longboat Key on Thursday brought in $750,000 for national Republicans’ efforts to retake the U.S. House.

“The huge success of this event shows the enormous support for retiring Speaker Nancy Pelosi and returning control of Congress to Republicans,” Buchanan said. “The left’s radical policies, from opening the borders to defunding police to expanding the Supreme Court with liberal justices, are turning off voters across America.”

The event took place a day after Democratic President Joe Biden delivered his first address to a joint session of Congress.  It also comes when Democrats hold just a six-seat majority, and Republicans feel an appetite to take back control of the House chamber. Historical trends favor the party out of power in the mid-terms following presidential elections.

The event included appearances by other House members from Florida and across the country. Minnesota Rep. Tom Emmer, chair of the NRCC through the 2022 cycle, buttered up guests at the event. From the Florida delegation, GOP Reps. Byron Donalds of Naples, Scott Franklin, of Lakeland, and Greg Steube of Sarasota, all attended. So did Missouri Rep. Billy Long, Illinois Rep. Darin LaHood, Texas Rep. Ronny Jackson, Alabama Rep. Gary Palmer and Pennsylvania Rep. Glen Thompson.

The event took place days after the first GOP Conference retreat of the year in Osceola County. McCarthy told POLITICO last week Florida has been a popular place to hold gatherings.

In part, this is a good state for events because it is a family destination, but also because of a concentration of donors. Longboat Key itself has been a popular retirement destination for numerous executives, many of those strong Republican donors.

This is the second time just this year McCarthy has visited the Key for fundraising. He also attended the kickoff for Buchanan’s reelection campaign on Super Bowl weekend.

Democrats the last two election cycles targeted Buchanan. Most recently, he faced Democrat Margaret Good in 2020. And while he beat her by a decisive 11 percentage points, the contest was expensive.

It’s possible some of the money raised this weekend could help Buchanan in the future if he faces a serious challenge this year, but as one of the wealthiest members of Congress, the NRCC even in past cycles has directed its resources elsewhere.

The fundraiser more significantly shows Buchanan’s support for and from the NRCC and House leadership. McCarthy at the event heaped praise on Buchanan, calling him a leader on tax reform and thanking him for the role he played in passing tax cuts under former President Donald Trump. He also noted Buchanan’s leadership of the Florida delegation.

That could play a role as Buchanan faces a primary challenge this year from former Sarasota City Commission candidate Martin Hyde, he just spoke at an event last week headlined by Gen. Michael Flynn, a former national security advisor to Trump.

Democrats Jan Schneider and Benjamin Miranda-Padilla have also filed against Buchanan this cycle.