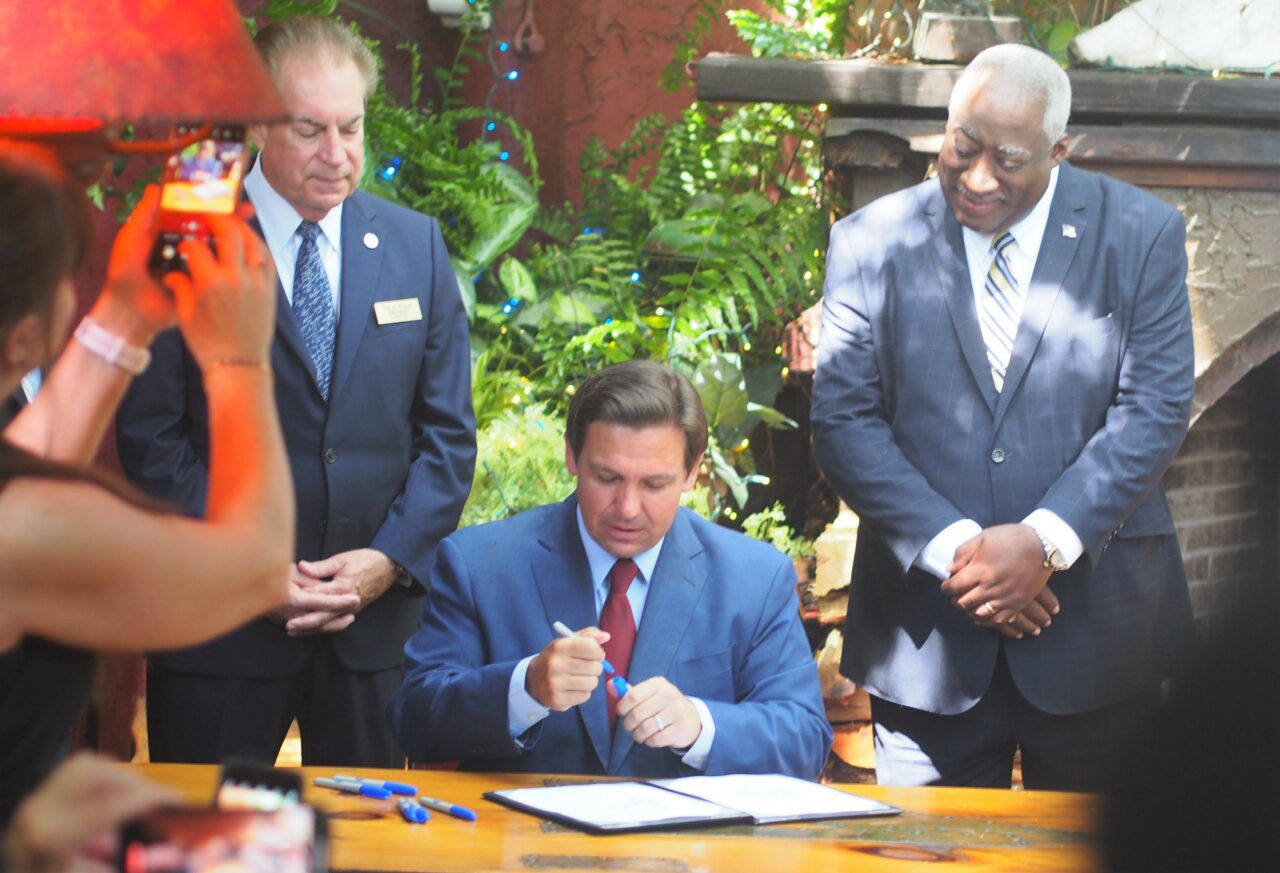 The biggest veto item is the Emergency Preparedness and Response Fund.

He vetoed a record $1.5 billion in spending. However, $1.35 billion of that comes from the latest round of the federal COVID-19 relief plan.

It marks the first budget worth more than $100 billion. However, a $100 billion budget likely won’t be sustainable for the coming years, legislative leaders say.

Unlike last year, when the pandemic led to a historic $1 billion in budget cuts. This year’s one-off increase is largely because of the pandemic and associated spending.

“I think the budget really reflects a state government that is meeting the core concerns of Floridians,” DeSantis added.

The budget ultimately leaves close to 10%, $9.5 billion, in reserves. That includes more than $1.2 billion in revenues collected above the mid-Session revenue estimates.

“You would have said that a year ago — no one would have believed that that would have been possible, and yet here we are,” DeSantis said, speaking at a restaurant in New Smyrna Beach.

With an April revision to the state’s general revenue projections that gave lawmakers $2 billion more to play with for the current and coming fiscal year, lawmakers say Florida is in a better place than it looked in August. Back then, the state was looking at a $5.4 billion shortfall over the two-year period because of the pandemic.

Speaking in Zephyrhills, House Speaker Chris Sprowls said the state a year ago was looking at “financial Armageddon.”

DeSantis had always predicted a rosier fiscal outlook than state economists. Meanwhile, the Legislature stayed conservative with its budget until the final stages of budget negotiations, when DeSantis said lawmakers “eventually came around.”

“They had been given a lot of forecasts that said that it was going to be very bad,” DeSantis said. “I was just like, look, I have confidence” before the April estimates came in.

He credited lawmakers with spending conservatively and responsibly. But he also credited resisting lockdowns and prioritizing vaccinations to the 65 and older population with keeping the state’s economy afloat.

“We were also the landing spot for a lot of people that wanted to escape the insanity and come and get their mental — get recharged from escaping these lockdowns,” he said. “We served as kind of the de facto West Berlin through a lot of the balance of this for the United States, and I think it’s benefited a lot of people throughout the country.”

Of the $1.35 billion in cuts from American Rescue Plan funds, $1 billion comes from the proposed Emergency Preparedness and Response Fund, one of the Governor’s own priorities. However, late federal guidance on how states could spend the relief dollars threw a wrench in that plan.

“If we were to go forward with it, we were going to run into (the) risk of having the feds come after us for it,” DeSantis said.

DeSantis added that the veto ensures the federal money is available for other uses approved by the Legislature. Among other things, the Republican-controlled Legislature tapped federal money to provide $1,000 bonuses to first responders.

“If we were to go forward with it, we were going to run into (the) risk of having the feds come after us for it,” DeSantis said.

He also vetoed about 150 line items pitched by individual lawmakers out of about 700 included in the budget.

The Legislature could revisit the trust fund next year, DeSantis added.

“Each month it got much better, and a lot of that credit goes to our Governor for making sure we were opened up,” Simpson said.

Lawmakers had expected Florida to get around $10 billion in American Rescue Plan relief. Florida only looks to get $8.8 billion.

“They do whatever they can to hurt states like Florida, and to help states that were locked down,” DeSantis said.

The American Rescue Plan was one of President Joe Biden‘s priorities. DeSantis has lamented the deal since its inception.

“It was a crass example of freeloading off the hard work of others he doesn’t want to acknowledge because he doesn’t agree with their politics. Shame on the governor,” they said in a statement. “When the President and Congressional Democrats stepped up to the plate, there were no political litmus tests. There was only the question of how to help. And how to do so quickly.”

DeSantis, who has been viewed as a possible contender for the 2024 Republican presidential nomination, said reopening Florida was not only beneficial for the Sunshine State but for the nation as a whole.

“Had we not lead the way we lead, you would not have seen a lot of these other states coming and following Florida’s lead as well,” he said.

Since the Legislative Session ended in April, DeSantis has traveled the state to tout highlights from the plan, including an additional $50 million to continue raising teacher salaries to a base minimum salary of $47,500 annually. Lawmakers wrote that additional allocation into their budget after beginning with a $500 million expenditure last year.

DeSantis also approved $1,000 bonuses for teachers, principals and first responders, one of his major asks of the Legislature from the federal funds.

The progressive group Florida Watch called the spending plan a “missed opportunity” to help more than just teachers and first responders with $1,000 bonuses as a reward for work during the pandemic.

“While children throughout our state are crammed into crumbling classrooms and portables, Republicans in Tallahassee refused to spend more than $3 billion that could have been used on much-needed maintenance projects in public schools,” Florida Watch Executive Director Josh Weierbach said in a statement. “Instead, they raised taxes on every Floridian by $1 billion a year. They also turned away billions of dollars by refusing to become the 39th state to expand Medicaid, which would lower the cost of care for all Floridians and extend access to quality and affordable health care to over 800,000 workers.”

Among other budget bills delivered to DeSantis’ desk Tuesday was a measure (HB 5011) to terminate the Lawton Chiles Endowment Fund, created in 1999 to fund tobacco-related health programs. The state must liquidate the remaining $958 million in the fund by the end of the coming fiscal year.