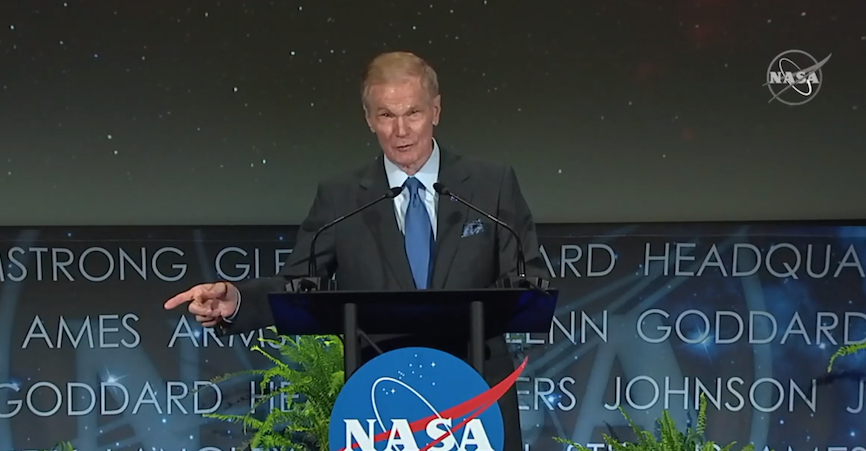 With assists from actor William Shatner and a host of scientists and space agency leaders, new NASA Administrator Bill Nelson pledged exploration of the frontier of space and to provide new visions of Earth.

Nelson was sworn in as NASA Administrator May 3 after he served 12 years in the Senate and 19 years in the U.S. House. He grew up on family ranches in Brevard County around what became Kennedy Space Center, and he went into space as a Congressman-astronaut aboard Space Shuttle Columbia in 1986, leaving space and NASA always among his priorities.

His first address to the space agency was stretched to 36 minutes by several videos, including one narrated by Shatner — the actor forever best known as Capt. James T. Kirk of Star Trek’s Starship Enterprise. Nelson ‘s message was as much about inspiring bold visions of exploration and the pursuit of knowledge, as it was about detailing any specific NASA  programs.

“We’re on track to do so many more amazing things for the country and the world, because that’s what NASA does,” Nelson said. “It’s just a little agency but its value is immense. That total value is hard to quantify.”

Still, he offered updates and even some breaking news about specific programs.

The Mars Perseverance rover is ready to move to its next exploration site on Mars.

In the fall, NASA will finally launch the James Webb Space Telescope, the next generation of telescope capable of “seeing” so deep into space it will capture light that is more than 13 billion years old within a few hundred million years of the Big Bang.

The long-delayed development of the agency’s next big rocket, the Space Launch System, will have the rocket ready for launch in its first test mission late this year.

Starting in 2023, NASA is launching a new set of five integrated satellites to study Earth’s climate and environment, “from the bedrock to the atmosphere,” and to track extreme weather, including hurricanes.

The Artemis mission to return to the moon will follow in the mid 2020s, first with a new lunar rover, then with NASA’s commitment of landing the first women astronauts and astronauts of color on the lunar surface.

NASA will continue to support and promote commercial space businesses such as SpaceX, Boeing, and Blue Origin. Nelson even said he expects to rely on commercial space rockets to place some equipment on the moon.

A Mars human mission in the 2030s, and eventually a martian colony, remain in longterm plans.

Nelson also announced NASA is planning two missions to Venus, the hot, cloudy, mysterious neighbor planet that Earth has not probed in 30 years. One mission, DaVinci+, will be looking for evidence of ancient oceans. The other, VERITAS, will map the Venus surface and reveal the planet’s inner workings.

Yet Nelson ticked through these as if they were tactical milestones in America’s greater quest to explore the cosmos.

“America has always had a frontier. In the beginning of the country, that frontier was westward. Now that frontier is upward and it’s out into the cosmos. It is part of our DNA to be explorers, adventurers. That’s in our DNA as Americans and we will continue to push the boundaries of space exploration,” Nelson said.

Shatner did not cite the final frontier that he famously espoused in Star Trek, but he did set the stage for Nelson’s broadest vision.

“We do it because NASA has realized that the universe, which extends billions of light years in all directions, is meaningless unless — unless what? Unless there are observers and caretakers of that stunning interstellar display. The universe demands to be noticed, to be seen, and duly noted,” Shatner offered. “The purpose of life on Earth is to see, to know, and to tell what the cosmos has to offer.”