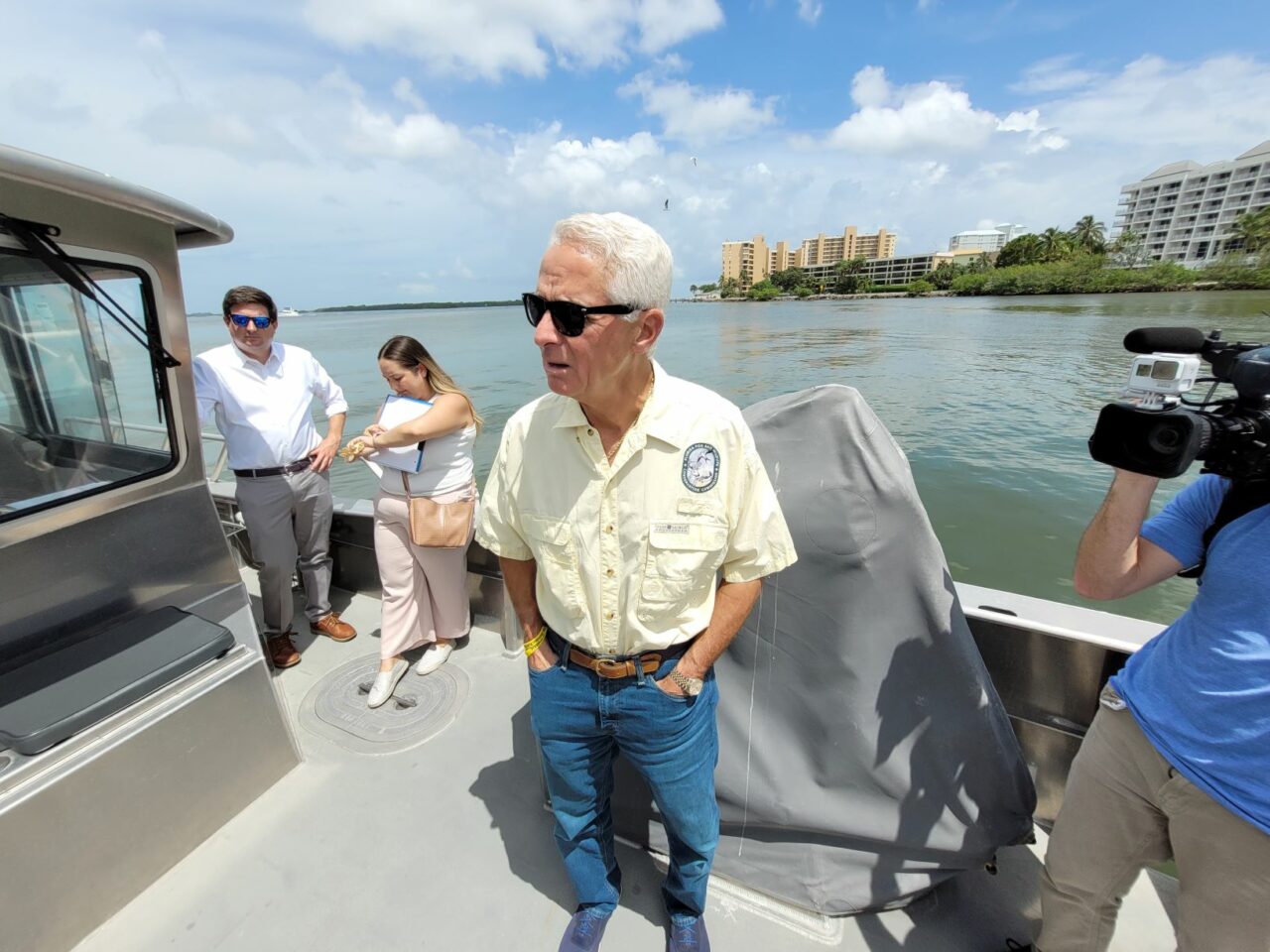 'I don’t think what this administration has done on the environment has worked at all.'

From the back of a vessel just off Sanibel Island, Democratic gubernatorial candidate Charlie Crist decried any suggestion Florida boasts some great plan to protect the environment.

“I don’t think what this administration has done on the environment has worked at all,” Crist told reporters.

He’s challenging Gov. Ron DeSantis next year and trying to undercut]’ any narrative the sitting Republican Governor has been an environmental champion. While DeSantis has devoted millions to water restoration, he doesn’t keep scientific leaders in charge of the Department of Environmental Protection and won’t provide the agency with any teeth to enforce legislation, Crist argued.

The Democratic Congressman and former Republican Governor grimaces at a lack of enforcement of environmental regulations. His face guffaws at two words: presumed compliance.

It’s the phrase Ryan Orgera, CEO of the Sanibel-Captiva Conservation Foundation, offered up when asked about the status quo as far as developers allowing stormwater into rivers and estuaries. Orgera scoffs, too.

“Which industry in the history of the world self-regulates that way?” Orgera asked.

“You don’t presume anything when you talk about the Sunshine State,” he said. “You make sure what’s happening is happening. And you trust, but you verify.”

Crist started Wednesday at his St. Petersburg home as red tide grips the city, followed by stops in Sarasota and Lee counties.

In Sarasota, he unveiled his own “Clean Water For All” policy plan that focuses on reducing runoff and algal blooms, converting septic use to sewers, and expanding water management and wetland preservation while bolstering the DEP with better enforcement powers.

It’s an environmental message tailored for those environmental advocates frustrated that the state, while investing heavily in cleaning up past messes, asks little in terms of cutting off nutrient flow, pollution and further compromise of waterways.

On a trip through the intercoastal waterways of Sanibel and Captiva and into the mouth of the Caloosahatchee River, Crist, along with invited press, rode along with SCCF scientists. The boat stopped by sensors in the water that measure the level and flow of nutrients, Dr. Eric Milbrandt fished one such device from the water to show how it works.

The sensors show that while nutrients flow in force when Lake Okeechobee discharges into the Caloosahatchee, there’s actually more nutrient loading that comes from development enclaves along the river. Much of it comes from rural counties with little money to spend on restoration or coastal reconstruction.

Data also shows heavy rains will release a significant amount of stormwater that flows from the streets and home lots in Cape Coral and Fort Myers into the river.

Asked about water discharge schedules for Lake Okeechobee and what what management schedule should be considered by the federal government there, Crist points to the plan and stresses the need to reduce stormwater runoff and cut off nutrients that would feed blue-green algae blooms or red tide the likes of which are ravaging Tampa Bay now.

Crist said the problem needs to be tackled on all fronts, but the state in the decade since he occupied the Governor’s Mansion has instead reduced oversight.

Notably, when Gov. Rick Scott succeeded Crist as Governor in 2011, the new Governor quickly eliminated the Department of Community Affairs. That provided a level of state oversight on major developments to ensure those won approval in compliance with the law. DeSantis has not reinstated the DCA nor any replacement.

“Part of (the) ‘Clean Water for All’ plan is to have more regulations that are smart,” Crist said. The state still wants to have development, and to have agriculture thrive, he said, but enforcing laws will ensure that can be done without threatening the environment or the economy.

“You know, I moved to Florida in 1960 and this place is amazing,” he said. “It’s beautiful and I think it’s the best place in the world, but not if we don’t protect it.”