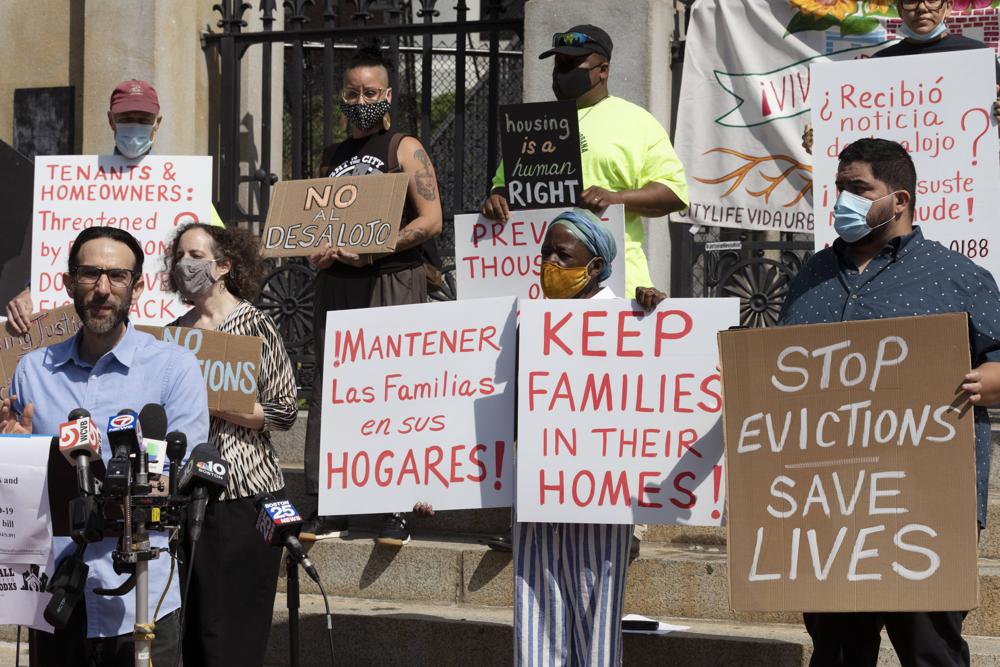 Millions of people nationwide could be evicted in coming weeks.

Evictions, which have mostly been on pause during the pandemic, are expected to ramp up on Monday after the expiration of a federal moratorium as housing courts take up more cases and tenants are locked out of their homes.

Housing advocates fear the end of the Centers for Disease Control and Prevention moratorium could result in millions of people being evicted in the coming weeks. But most expect an uptick in filings in the coming days rather than a wave of evictions.

The Biden administration announced Thursday it will allow a nationwide ban to expire. It argued that its hands are tied after the U.S. Supreme Court signaled the moratorium would only be extended until the end of the month.

House lawmakers on Friday attempted but, ultimately failed, to pass a bill to extend the moratorium even for a few months. Some Democratic lawmakers had wanted it extended until the end of the year.

“Struggling renters are now facing a health crisis and an eviction crisis,” said Alicia Mazzara, a senior research analyst at the Center on Budget and Policy Priorities.

“Without the CDC’s moratorium, millions of people are at risk of being evicted or becoming homeless, increasing their exposure to COVID just as cases are rising across the country. The effects will fall heavily on people of color, particularly Black and Latino communities, who face greater risk of eviction and more barriers to vaccination.”

Parts of the South and other regions with weaker tenant protections will likely see the largest spikes and communities of color where vaccination rates are sometimes lower will be hit hardest. But advocates say this crisis is likely to have a wider impact than pre-pandemic evictions.

The Biden administration had hoped that historic amounts of rental assistance allocated by Congress in December and March would help avert an eviction crisis. But the distribution has been painfully slow. So far, only about $3 billion of the first tranche of $25 billion has been distributed through June by states and localities. Another $21.5 billion will go to the states.

Ashley Phonsyry, 22, who will be in court Thursday for an eviction hearing after falling several thousands dollars behind on her Fayetteville, Arkansas, two-bedroom apartment, said her landlord has refused to take rental assistance. She left her job after being hurt in a domestic violence incident and suffering from depression and anxiety. The eviction hearing is a day after her domestic violence case goes to court.

“It frustrates me and scares me,” she said of being evicted. “I’m trying so hard to make it right and it doesn’t seem like it’s enough.”

Around the country, courts, legal advocates and law enforcement agencies are gearing up for evictions to return to pre-pandemic levels, a time when 3.7 million people were displaced from their homes every year, or seven every minute, according to the Eviction Lab at Princeton University.

In St. Louis, the Sheriff’s office handles court-ordered evictions. Sheriff Vernon Betts said 126 evictions have been ordered and are just waiting for the moratorium to end. His office plans to enforce about 30 evictions per day starting Aug. 9.

Betts knows there will be hundreds of additional orders soon. He’s already been contacted by countless landlords who haven’t yet filed for eviction, but plan to. And he expected to increase his staffing.

“We already know that we have about 126 evictions already lined up. What we’re planning on doing is tripling our two-man team,” he said. “Right off the bat we want to clean up that 126 evictions.”

Sgt. William Brown, who leads the evictions unit for the Milwaukee County Sheriff’s Office, said he doesn’t know how quickly evictions will ramp up after the moratorium ends. Landlords still have to go through several steps before they can evict. But he said he has no doubt that many more people will be forced out, rattling off statistics that show the steep decline in evictions since the pandemic began: nearly 4,000 in 2018 and 2019, then a steep plunge to about 1,900 in 2020.

“Absolutely. Absolutely,” he said. “I think that once evictions are there fully, there’s no more moratorium in place, it’s going to get really bad.”

“It’s the most challenging position that I’ve ever been in, because at the end of the day I have an empathy and sympathy. I’m required by state statute to execute this,” he said. “You have to feel for these people … watching small kids go through this, this entire process.”

Lee Camp, an attorney with the St. Louis legal group ArchCity Defenders, said the vast majority of tenants facing eviction don’t have lawyers, often because they can’t afford them. Meanwhile, he said, eviction cases move through the courts quickly in Missouri, often in a matter of weeks.

“The scales of justice are just at this incredible imbalance,” Camp said.

In Wisconsin, Heiner Giese, legal counsel for the Apartment Association of Southeastern Wisconsin, said his trade association for rental property owners in the Milwaukee area has been “very strong in urging our members and all landlords not to evict.”

“I pretty strongly believe from the feedback we get from our members in the Milwaukee area … there will not be this giant tsunami of (evictions),” Giese said.

Still, Colleen Foley, executive director of the Legal Aid Society of Milwaukee, said she “certainly” expects an uptick. She said 161 evictions were filed last week, a significant increase from prior weeks where filings tended to hover around 100 to 120. She said she was waiting to hear when those cases would go to court.