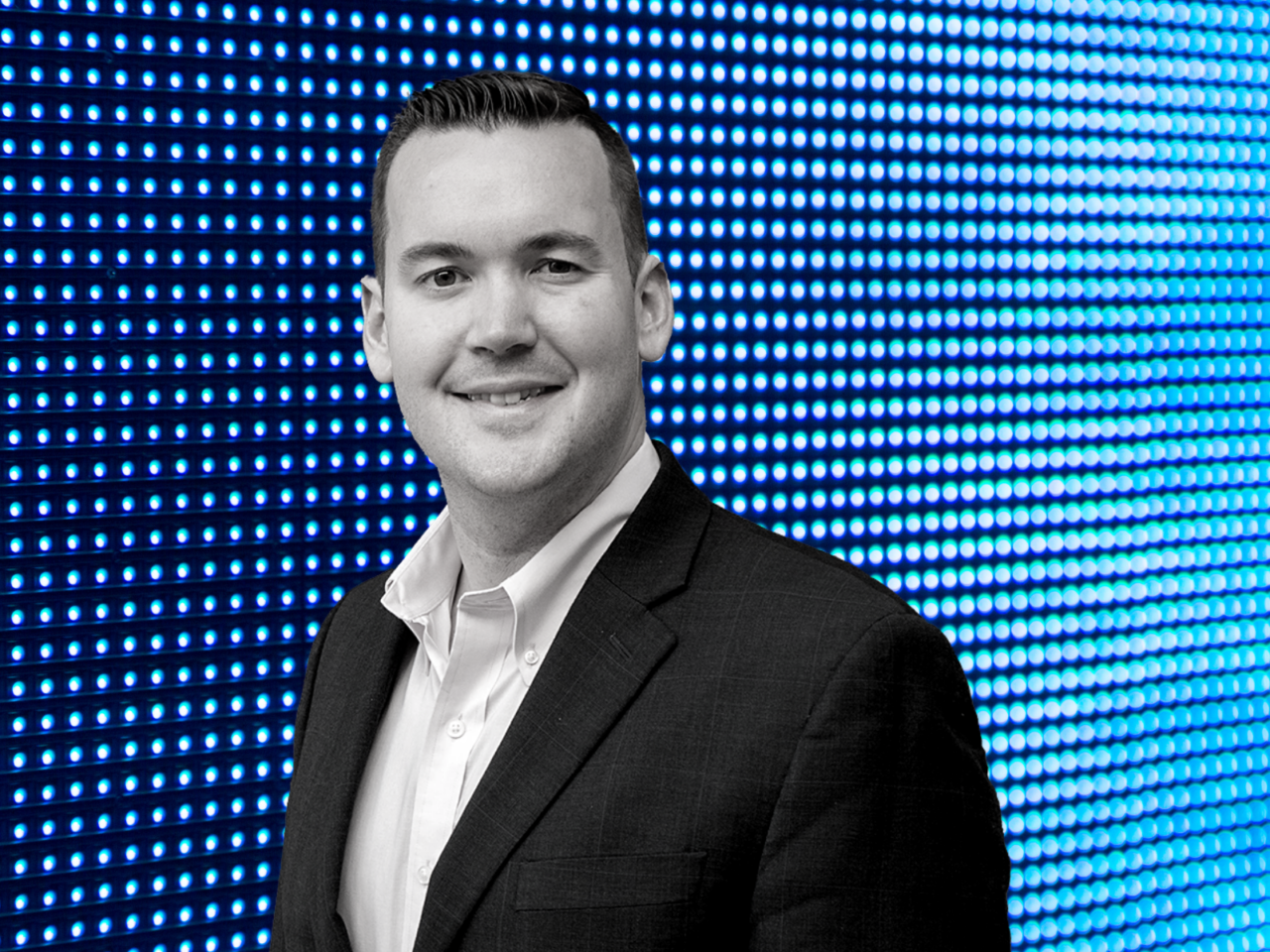 Two mailers supporting the mayoral candidate, the only top-polling Republican in the race, share conflicting messages. One touts Blackmon as a non-career politician who will keep taxes low and keep neighborhoods safe. The other touts him as a progressive in the race who will support Democratic priorities such as social justice, equality, and good-paying jobs.

The mailer targeting conservatives begins with the headline “stop the career politicians with crazy policies” above images of homeless camps and rundown buildings. Next to that, it offers a caution: “Progressive policies may be closer than they appear.”

It then highlights what the mailer describes as “the progressive plan.” It includes headlines from various news articles nationwide, including:

— “The US saw significant crime rise across major cities in 2020. And it’s not letting up” — CNN

— “Austin looks for routes out of its homelessness crisis” — Austin Chronicle

— “Crime is down in St. Petersburg, but homicides are up” — St. Pete Catalyst

The headlines are crossed out with a red X in a circle. 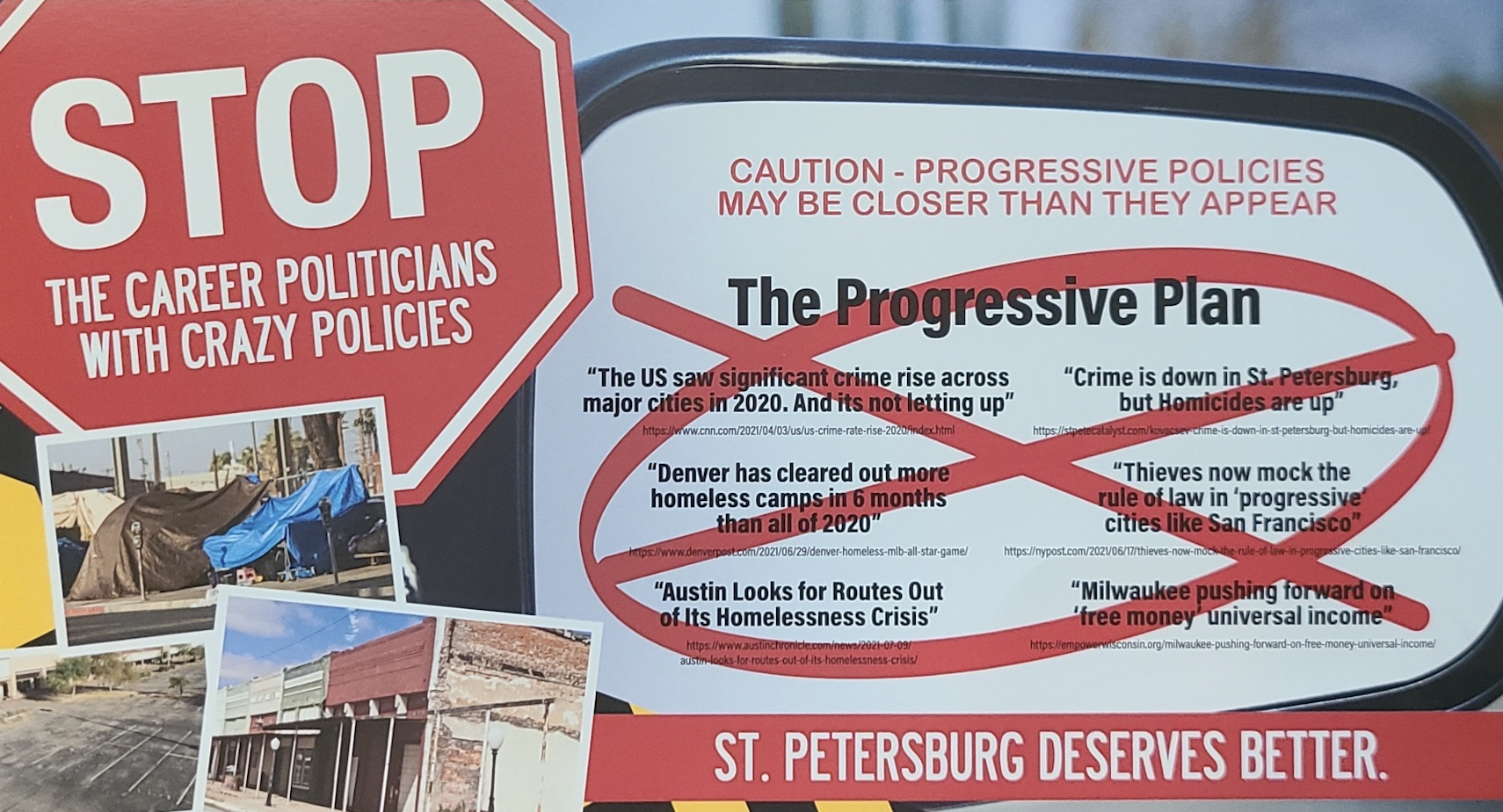 “I will use common sense to keep St. Petersburg moving forward by making sure your taxes remain low, your neighborhoods are safe, and government stays out of your way,” a quote from Blackmon on the mailer reads.

That piece was paid for by Blackmon’s political committee, Prosperous St. Petersburg.

Compare that to another piece targeting Democrats in the race, and the story is much different. The second piece of literature paid for by Blackmon’s official campaign touts Blackmon as “a progressive voice in our Mayor’s office.” 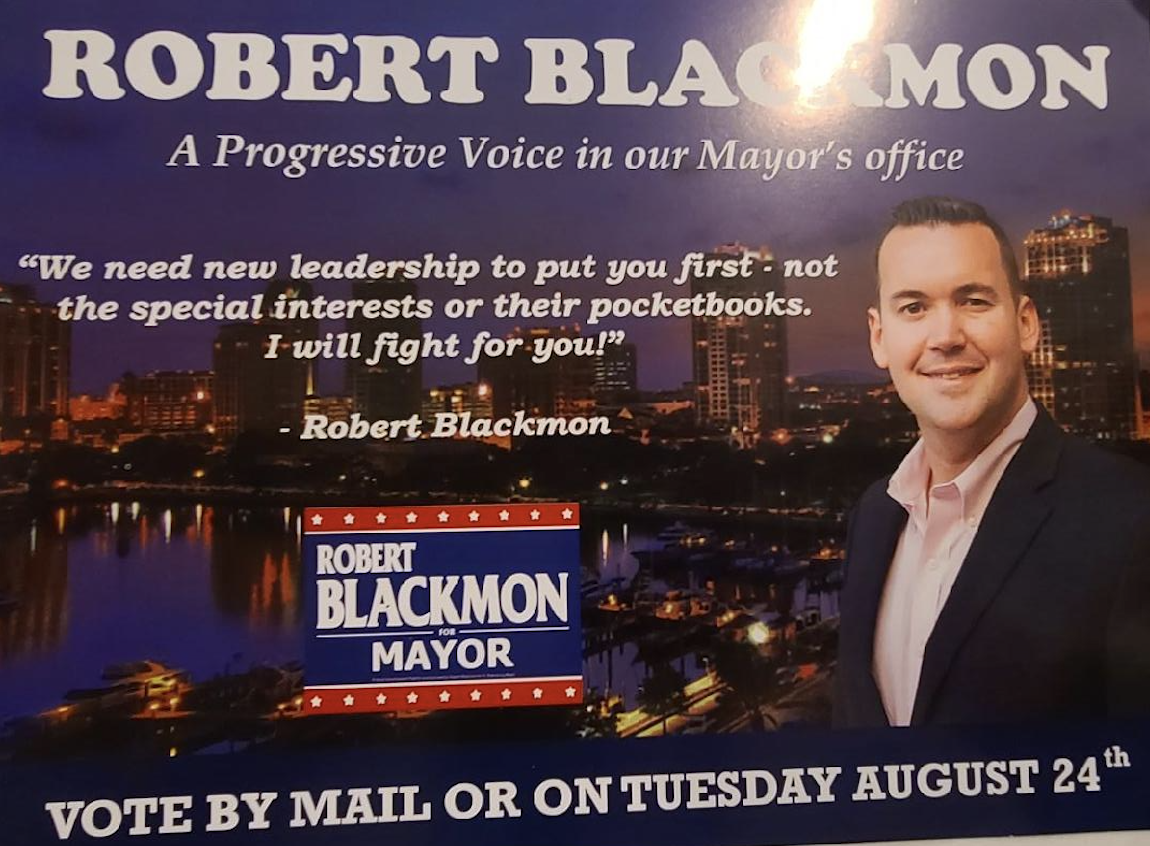 “We need new leadership to put you first — not the special interests or their pocketbooks. I will fight for you,” it reads.

That’s not a particularly partisan statement, but on the other side of the campaign mailer, there is a list of priorities typically aligned with Democratic candidates and progressive voters.

There, the piece promises to create good-paying jobs, protect the environment, provide affordable housing for all and fight for social justice and equality. The list also includes a less partisan promise to reopen the St. Pete Science Center, a longtime priority for Blackmon since he first took office nearly two years ago, and a reminder that he stood up for first responders — though it’s not clear what action he’s referencing. 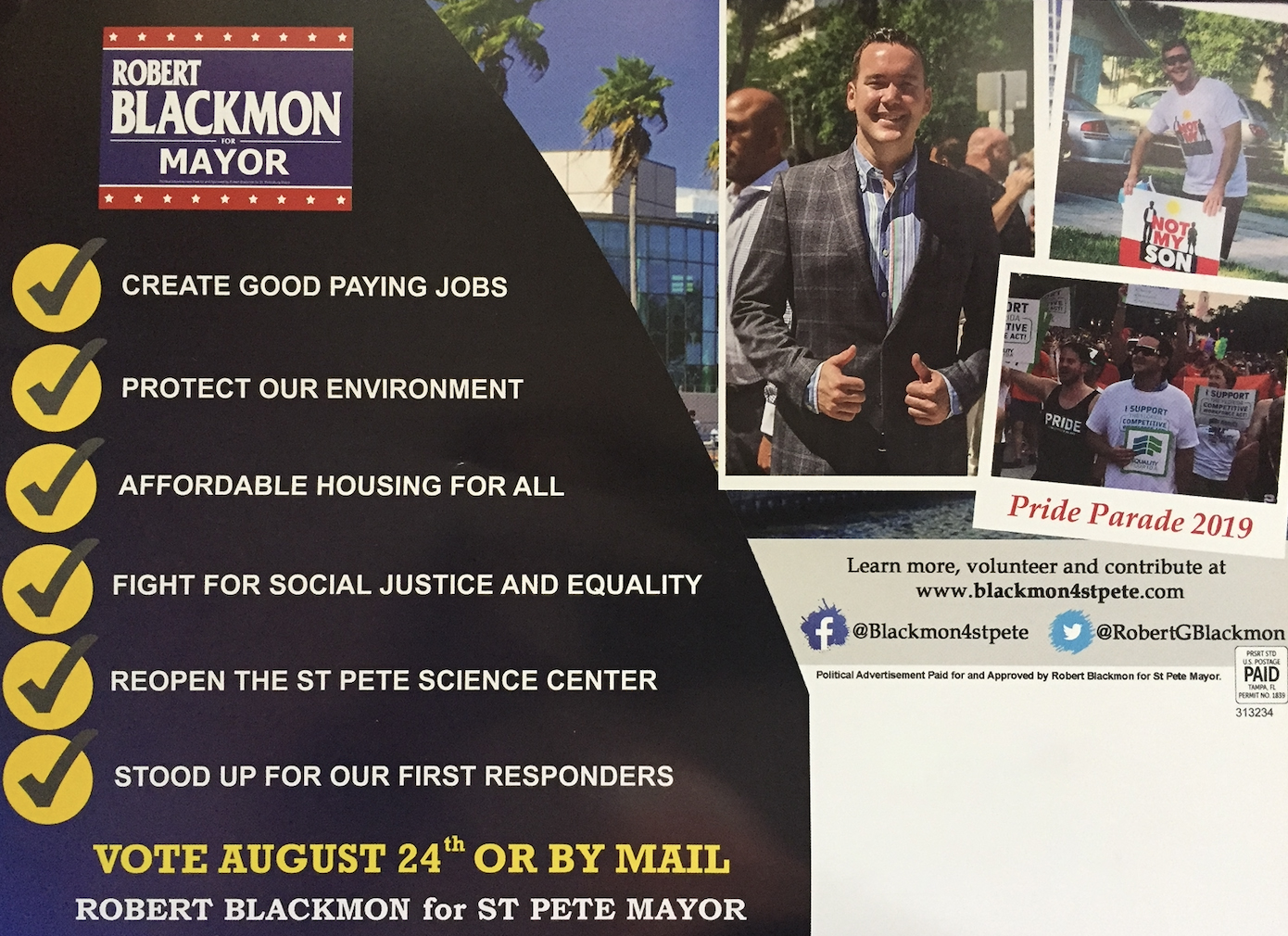 In a statement to Florida Politics about the mailers, Blackmon said he didn’t see them as contradictory.

“I will fight for a clean environment, good-paying jobs, and fair treatment for all. At the same time, I will stand against any and all radical agendas that seek to defund our police and push for more government control,” he wrote in a text.

But one of his opponents’ campaigns isn’t buying that explanation.

“These mailers are just further proof of the two faced race that Robert Blackmon is running — when he’s not misleading St. Pete voters on his so called ‘progressive platform’ he’s misleading his tenants before he files for their eviction,” said Stephanie Owens, campaign manager for former Pinellas County Commissioner Ken Welch, referencing recent news of Blackmon filing initial eviction paperwork against tenants at a property he acquired in April. “Residents of St. Pete deserve a leader who is laser-focused on their best interests and moving this City forward not a two-faced slumlord who moonlights as a progressive.”

The dueling messages are noteworthy. While the race is nonpartisan, meaning candidates’ political affiliations won’t appear on the Aug. 24 Primary ballot, Blackmon faces his most significant opposition from two Democrats — Welch and fellow City Council member Darden Rice. According to the most recent poll, Welch is leading, while Blackmon trailed just one percentage point, followed by Rice five points behind him.

Blackmon needs to hold onto that No. 2 spot to secure a spot in the Nov. 2 General Election. To do that, he needs to ensure he doesn’t bleed votes to another Republican in the race, restaurateur Pete Boland. While Boland nabbed just 4% support in the latest poll, he’s campaigning as if he’s in the top tier. While that’s not likely to get him into the top two, there is still time to peel conservative votes away from Blackmon.

The strategy is also prudent looking ahead. If Blackmon makes it to the General Election, which would likely be against Welch or Rice based on current campaign trends, he’d have to earn more support from Democrats.

Democrats outnumber Republicans in St. Pete, with 89,057 voters to the GOP’s 49,992. And in the most recent poll, taken in late July, he claimed just 9% support among Democrats.

It’s not the first time Blackmon has used this tactic.

Two years ago, when he was running for City Council, he ran on a bipartisan platform, with support from several prominent Democrats, including Rice. At that time, an almost identical mailer targeted Democrats. The only difference between the mailer two years ago and the one that went out last week was the date of the election, and the office sought. Both included an image of Blackmon attending the Pride Parade in 2019, a clear effort to solidify his promise to fight for equality.

Also, two years ago, Blackmon sent a conflicting mailer better catered to conservative voters. While that mailer was far less obvious than the most recent one — it didn’t specifically criticize progressive policies — it included images of Blackmon with former Mayor Rick Baker, a prominent local Republican. It removed the image from the Pride Parade and replaced messages about being a progressive voice with promises to support public safety.

Blackmon’s opponent at the time — John Hornbeck, who is trying again for the City Council seat this year — called Blackmon out for inconsistent messaging.

But then, it worked. He handily defeated Hornbeck with 64% of the vote.

Things could be different this time around. Obviously, he doesn’t have Rice in his corner this time. Instead, he faces her. And unlike two years ago, he’s running in a race with powerhouse opponents. Hornbeck’s campaign failed to raise the type of money needed to compete in an open race, and he lacked name recognition. That made for an easy path to victory.

This time around, there’s an obvious benefit. Those who receive one mailer won’t necessarily know about the other. Campaign strategy 101 holds that targeted ads work. It is not uncommon for messages sent to conservatives to be vastly different from those sent to liberal and progressive voters.

That means voters who received one didn’t receive the other and may never become aware of the conflicting wording.

A spokesperson for Rice’s campaign did not immediately respond to a request for comment.